I posted recently on issues of migration and mission, and how each of those terms can be applied to the spread of religions. In particular, I stressed the many factors that might cause a religion to spread, quite apart from conscious, deliberate evangelization. Often, we exaggerate deliberate missionary activity while underplaying the role of other forms of population movement that might be non-intentional, casual, even accidental, and definitely not directed toward religious goals. To illustrate this, let me draw a parallel with the spread of material goods.

When I was an undergraduate, one of the people teaching medieval history was the great Philip Grierson, who was primarily a numismatist, a scholar of coins. His classes were so memorable because he actually passed around original late Roman gold coins from his vast personal collection, objects of great beauty and value – and nobody left the room until every single one was accounted for. (There is a wonderful obituary of him). Quite apart from that showmanship, Grierson left a powerful impact on my own thinking by his remarkable ability to ask searching questions, particularly about issues of intention.

Grierson launched a minor revolution in history and archaeology, by asking the simple question of how a particular coin or treasure had ended up where it was found. (One key work was a 1959 article called “Commerce in the Dark Ages: A Critique of the Evidence.”) If for instance you found a hoard of fourth century Roman coins in Sweden or Ireland or Persia, earlier scholars had discussed this as evidence of trade or commerce. Nonsense, said Grierson. Well yes, he said, it might conceivably have been commerce in something like the modern sense, but there were any number of other possible ways of transmission:

There are other means whereby goods can pass from to hand, means which must have played a more conspicuous part in the society of the Dark Ages than they would in more settled and advanced periods. They can be characterized most briefly as ‘theft’ and ‘gift’, using ‘theft’ to include all unilateral transfers of property which take place involuntarily – plunder in war would be the commonest type – and ‘gift’ to cover all those which take place with the free consent of the donor. Somewhere be two would be a varied series of payments, such as ransoms, compensations, and fines, while such payments as dowries, the wages of mercenaries, property carried to and fro by political exiles, would all form part of the picture. Our difficulty lies in trying to estimate their relative importance.

The hoard could have been plunder or booty, stolen during raids or warfare. (As career paths, raiding and trading merged seamlessly into one another). A precious object might have been tribute, given under a greater or lesser degree of coercion. It might have been a political bribe.

Or, critically, it might have been connected with the gift-giving that was such a critical part of early societies. That last mechanism was all the more important when we moved into societies where written evidence was sparse, as in the Viking era. Every heroic epic describes gift giving between chiefs and magnates, often on a scale that was – well, epic. 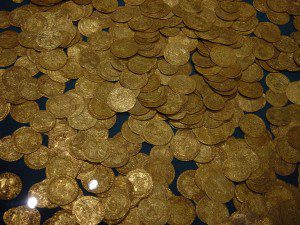 And whatever the means of connection, the coin (or helmet, or necklace) might have passed through twenty hands before it reached its final destination. It certainly need not have been a direct transition. The fact that object A was found in location B said precisely nothing about any direct relationships between A and B.

Grierson was highlighting the prejudices of mainstream economic historians, who naturally tended to see the past in rational and peaceful terms they could naturally identify with. Hence, they saw gold coins moving as commerce between peaceful communities, which made nonsense of old stereotypes of rampaging barbarians. In reality, those barbarian raids were by far the most likely means by which wealthy Romans might have been forced to give up their cherished treasures.

In fact, said Grierson, you shouldn’t use loaded words like “commerce” without further evidence, as the very word implies some knowledge of intention. When in doubt about that intention, admit it: be agnostic. As he concluded,

In general, we do not know how coins or jewellery or similar objects reached their destinations, and with so many possibilities from which to choose any conclusions that we draw can only be of the most tentative description. Much evidence alleged to ‘prove’ the existence of trade proves nothing of the kind, and in dealing with the Dark Ages, in cases where we cannot prove, we are not entitled without a careful weighing of the evidence to assume.

People are different from inanimate objects, and in modern cases, you can actually ask them why they moved. But words like migration and mission absolutely imply intention, which might be obscure. Historically, people might move as missionaries or slaves, as refugees or utopian colonists, as economic migrants or fugitives from justice. In Grierson’s terms, these individuals or families might have been gifts, or plunder, or items of commerce. In any of those cases, they often carried their religions with them. (The same caveats apply to understanding DNA evidence in terms of deliberate migration, but that is a different story).

In modern times, migrants usually move in search of work and a livelihood. And someone could and should write a magnificent book on the role of students as vectors of faiths and denominations.

As with the economic historians, scholars of religion have some unacknowledged prejudices. When they trace the spread of faith or faiths, there is a natural tendency to concentrate on the work of identifiable named individuals, commonly professional clergy or missionaries. Such accounts have the advantage of allowing readers to trace the narrative through one or more individual lives. The problem is that writing the past in such a way tends to exaggerate the significance of such conscious mission activity. Often, it also means retroactively imposing deliberate intention on a process that was in fact much more haphazard and undirected.

And Philip Grierson would have been astounded to see himself cited in the context of missionary history.

February 20, 2017 Spreading the Faith: How Migration Changes Religion
Recent Comments
0 | Leave a Comment
"Lest people make too much of the "Medieval Warm Period" relative to the global climate, ..."
AHH How a Warm Climate Made the ..."
"Excellent! This is actual meaning of being a Christ follower, in that it resounds the ..."
Douglas McCall American Religion Beyond the Synagogue, Church, ..."
"I don't know of a serious complementarian that thinks their interpretation is canonical and without ..."
Jonathan H Deconstructing the ESV: A Historian’s Response ..."
"No, no they don't. That is to overinterpret their actions. I would read up on ..."
Jonathan H Deconstructing the ESV: A Historian’s Response ..."
Browse Our Archives
get the latest updates from
Anxious Bench
and the Patheos
Evangelical
Channel
POPULAR AT PATHEOS Evangelical
1