I have been posting about the astonishing wave of scriptural and Bible-related discoveries at the turn of the twentieth century, and their cultural impact. Although not quite as sensational as the find of a new alternative gospel, one moment in particular demands our attention for what it suggest about the nature of the Bible and its canon.

The text in question was the book that the King James version calls Ecclesiasticus, and which Catholic and other Bibles call Sirach (or Ben Sira). A wisdom text, Sirach is one of the few Bible books that we can reliably attribute to a particular person and date. It was originally written by the scribe Jesus ben Sira – actually, Yeshua ben Eleazar ben Sira – in Jerusalem, in Hebrew, around 190 BC. His grandson then translated it into Greek, “when I came to Egypt in the thirty-eighth year of the reign of [Ptolemy VIII] Euergetes and stayed for some time.” That dates the grandson’s move precisely to 132 BC. As a book, Sirach has many virtues, and it is even one of the very first sources to suggest the state of the Old Testament canon – to give an idea of the books that were included at that time. The New Testament contains several probable references or quotations from Sirach.

Sirach was included in the Greek Septuagint translation of the Bible, and because of that it remains fully in the Biblical canon for virtually all non-Protestant Christian groups, for Catholics, Orthodox, Oriental Orthodox, and others. At the Reformation, though, Protestants became much stricter about their definition of canon, and largely accepted the Jewish view of the limits of scripture. This left Sirach together with several other works in the inferior category of Deutercanonical (“Second Canon”) or apocryphal texts. They were not excluded from scripture, and European Bibles regularly printed them in a separate apocryphal section right up to the nineteenth century. At that point, though, partly for commercial reasons, English Bibles increasingly appeared without the Apocrypha, and the Deutercanonical writings largely vanished from regular usage. They are quite unknown to most users of popular modern versions such as the New International Version.

One reason for the exclusion of Sirach and the others was the lack of a Hebrew or Aramaic original, an odd but potent criterion that owes much to a kind of linguistic prejudice. It almost suggests that the God of the Old Testament would not have deigned to reveal himself in a non-Semitic language. But as we have seen, Sirach genuinely was originally written in Hebrew, although the original was lost except for some rabbinic quotations.

Or at least, the Hebrew remained lost until very modern times. In the 1890s, several fragments were discovered in a complex series of finds and transactions, as described by Solomon Schechter and Charles Taylor, The Wisdom of Ben Sira: Portions of the Book Ecclesiasticus (Cambridge University Press, 1899). The story deserves quotation at length for what it suggests about the antiquarian enterprise in the Middle East at this time. (I have already described the significance of the Genizah, the storage room of an old Cairo synagogue):

On the 13th May in the following year [1896], Dr. Schechter at Cambridge observed in a bundle of fragments brought by Mrs. Lewis and Mrs. Gibson from Southern Palestine a time-worn leaf from a copy of the lost original Hebrew of Ben Sira’s work.

The publication of this first fragment (ch. 39. 15 40. 8) of the Wisdom of Ben Sira in the Expositor led to the identification of the nine leaves following it (ch. 40. 9 49. 11), which had been acquired by the Bodleian Library through Professor Sayce “almost simultaneously” with the discovery of the leaf first found. The nine and the one, promptly edited by Messrs. Cowley and Neubauer in Hebrew and English, with the Greek, Old Latin and Peshitto Syriac Versions, were published at the Clarendon Press early in 1897.

At Midsummer in that year Dr. Schechter found in the Cairo Genizah collection at Cambridge another leaf of Ecclesiasticus from the same Codex, and afterwards from time to time six others, including the penultimate and last folios of the book, which were discovered together on the 27th August, 1897.

Two more leaves from this Codex, identified by Mr. G. Margoliouth, are now in the British Museum, as announced in the Times of the 4th April, 1899. The one fits in between the first and the second in order of the seven leaves just mentioned, and the other between the third and the fourth. In the same Genizah collection Dr. Schechter had detected also two pairs of leaves from another manuscript of Ecclesiasticus, on the 2nd and the 24th of September, 1897, respectively. These four small leaves, which contain in close writing more than the seven from the other manuscript, could only have been singled out from a collection of so many thousands by a careful though necessarily rapid scrutiny. They altogether lack the striking Biblical and Masoretic appearance which distinguished the Ben Sira fragments previously found.

Most of the finds were copied in the Middle Ages, the 11th or 12th centuries AD. Although fragmentary, there was quite enough to demonstrate that these portions actually did reflect the original version of Sirach. That was confirmed by later finds of larger sections of the work among the Dead Sea Scrolls, and at Masada.

By the way, the reference to the Times indicates the media splash that this story created in newspapers and popular magazines. After all, this was the lost original of a (sort of) Biblical book.

This is an evocative tale in its own right, and it has often been retold. But for present purposes, the central po9int is that within the past century, we have established the fact that Sirach was definitely read and venerated in Hebrew in the Second Temple era, and indeed into early Christian times. Although the Qumran sect did not have strict guidelines as to what might be considered approved scriptures, Sirach probably did enjoy canonical or near-canonical status in the last couple of centuries BC.

If the Hebrew text had survived the Middle Ages, and had been known to West Europeans, I wonder how they could have avoided including the work fully in the approved canonical Bible? It was a near run thing.

Sirach is an example I cite when arguing against using the term “Hebrew Bible” as a synonym for “Old Testament.” The terms are not the same. Sirach is part of (most) Old Testaments, but it is not included in the Jewish Tanakh or Hebrew Bible. And if that particular book was Hebrew once, it forfeited that status for a couple of millennia.

An excellent collection of Sirach/Ben Sira related resources may be found at http://www.bensira.org/.

May 26, 2017
Alternative Scriptures: Beyond the New Testament
Next Post 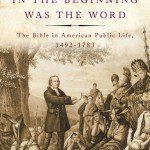 May 30, 2017 Mike Pence, "Orientation to Authority," and Public Uses of Romans 13
Recent Comments
0 | Leave a Comment
"Great topic, and a terrific discussion."
philipjenkins Tejano Methodism, Material Culture, and COVID
"The fastest growing religion in Sub-Saharan Africa, Carribean (Haiti, Jamaica, Dominican Republic etc), Central America ..."
Paul Juma Biblical Authority amidst American Christian Division: ..."
"Let us know when your book is on the NYT best seller list."
Enlightened Do Evangelical Churches Have a Catechesis ..."
"It's the habit of historians to use historical examples of practices as proof of the ..."
Leigh Ann It’s A Small, Small (Complementarian) World
Browse Our Archives
get the latest updates from
Anxious Bench
and the Patheos
Evangelical
Channel
POPULAR AT PATHEOS Evangelical
1