Alternative Scriptures: From Qumran to Christ

Alternative Scriptures: From Qumran to Christ May 15, 2017 Philip Jenkins

Ever since the discovery of the Dead Sea Scrolls in the 1940s, many writers have tried to draw connections to Christian origins. Was Christ a member of the Qumran community? How about John the Baptist? While acknowledging the significance of the community and its intellectual world, scholars have overwhelmingly rejected such direct links. For present purposes, though, I want to stress just how very old-established such speculations are, and paradoxically, they long predate the discovery of the Scrolls themselves.

I phrase this observation carefully. Although the specific names were not used and would not have made sense at the time, already around 1910, both the Dead Sea Scrolls and the Gospel of Thomas were an exciting part of popular religious debate and exploration in the Anglo-American world.

As I described last time, in 1910 Solomon Schechter published mysterious “Fragments of a Zadokite Work,” which later turned out to be a crucial text from the Qumran community, and the document gave a lot of information about the movement and its history. This occurred at a time of intense discussion about Christian origins, when new gospels and early Christian texts were coming to light at an amazing pace. Inevitably, then, scholars and popular writers tried to fit the Zadokite work into that context, and to apply it to Christ.

Much depended on the issue of chronology. Today, most scholars, if by no means all, would see the foundation of the Qumran community around the mid-second century BC, which would also be the time of its founding Teacher of Righteousness. But the Zadokite work offered few reliable hints about chronology, and that opened the way to pushing it forward into the Christian era. In 1913, R. H. Charles discussed the Fragments in his Religious Development Between the Old and the New Testaments:

After the death of the Teacher of Righteousness, whose teaching and activities are not recounted—a fact which points to the defectiveness of our MSS.—a considerable period elapses, much more than forty years. We have now arrived at the date of our author. He is living “in the end of the days,” and the advent of the Messiah “from Aaron and Israel” is momentarily looked for. If I am right in my interpretation of this phrase, the Messiah was to be a son of Mariamne and Herod (i. e, from Aaron and Israel), and the book was therefore written between 18 and 8 B.C.

That is suggestive, in implying a messianic expectation precisely around the birth of Jesus.

Charles, moreover, argued that “the Zadokites were precursors of the Christians, having more in common than any other Jewish party with the religious faith and the ethical ideal of Jesus and his followers. He thinks we may explain the disappearance of the Zadokites from Jewish history and literature by the assumption that they became Christians, and so lost their identity as an earlier sect.”

Another prominent scholar drew even closer parallels. In 1910, the English Athenaeum published an article in which Rev. George Margoliouth explicitly claimed the Fragments as an early Jewish-Christian text (November 26, 1910). That opinion carried weight because Margoliouth (1853-1924) was a highly qualified Cambridge Hebrew scholar, and Keeper of Hebrew, Syriac and Eethiopic manuscripts at the British Museum. Although he came from a very distinguished family of Jewish scholars, he converted to Christianity in 1878, and was ordained in 1881.

claimed to have made the startling discovery that the personages mentioned are the leading ones in the first period of Christian history; that the “Anointed One “is John the Baptist; that the “Teacher of Righteousness” is Jesus; and that the “Man of Scoffing” is Paul. He thus makes this a document belonging to the first century, and representing the views of a Jewish-Christian sect who rejected the teachings of Paul, regarding him as a perverter of the true faith of Jesus, and who remained “zealous for the Law.” Such a remarkable claim challenges attention to this Document; for if the claim be justified, it will provide us a source of the earliest Christian history of the utmost importance, giving us a view of the position of those very early disciples who held fast to the Mosaic Law, and made of the new Way only a sect in Judaism.

So much of that view prefigures later post-1947 speculations about the possible role of Jesus and the others as characters in the Scrolls. Margoliouth also presented his theory under the title of “The Sadducean Christians of Damascus,” The Living Age, January 28, 1911.

This theory had a massive public impact, very much like modern theorizing over newly discovered “gospels.” On Christmas Day (!) 1910, the New York Times headlined, sensationally and uncritically,

Dr. Schechter Finds a Writing of the First Century of the Christian Era.

Describes Personages Believed to be Christ, John the Baptist, and the Apostle Paul.

This was probably a “Hebrew Gospel earlier than the Gospels of the New Testament.” The following Sunday’s magazine section included an extended and well illustrated story entitled “Important Jewish Manuscript Older Than Gospels” (January 1, 1911).

Other popular coverage followed, including “A First Century Document,” in Outlook January 7, 1911. Harpers Weekly (January 21, 1911) announced “New Christian Scriptures?” and commented on “The discovery of an ancient document which is believed by one authority to be a record of early Christian activities that antedates the gospels,”

As in later times, the theory was promptly challenged, and a vigorous scholarly debate followed in both Britain and the US. Schechter himself basically ignored Margoliouth, and was presumably not pleased to have the story so often cited as if he were making the Jewish-Christian claim, which he certainly had not.

Several American scholars directly confronted the Jewish-Christian, “Sadducean Christian”  theory, mainly on the grounds of chronology – briefly, that the Fragments long predated Jesus’s time. A particularly effective counter came from William Hayes Ward, who published “The Zadokite Document,” in Bibliotheca Sacra (July 1911). On linguistic and historical grounds, he argued for a date closer to 80 BC, which would remove any possibility of a Christian context. He may have been too conservative in that dating, which should more probably be assigned to around 150 BC, but he was certainly right in his general principles. A second century BC date was also suggested  by G. F. Moore, “The Covenanters of Damascus,” Harvard Theological Review, 1911, pp. 330-377.

Also chilly was Kaufmann Kohler, “Dositheus, the Samaritan Heresiarch, and his Relations to Jewish and Christian Doctrines and Sects,” American Journal of Theology 15(3)(1911): 404-435. Kohler found Margoliouth far-fetched. Even so, he was himself wrong in one of his arguments. For Kohler, Kohler, one decisive argument was that “There is no reference whatever [in the Fragments] to either baptism or any other Christian practice or doctrine.” That is exactly right as it stands, based on the Fragments alone. However, the Dead Sea Scrolls would later show that the Qumran sect did indeed practice something very like baptism.

For present purposes, though, the details of the dispute do not matter. The main point is that, over a century ago, scholars were debating these critical issues arising from the Qumran sects, questions that we would normally assume to have come to light only after 1947.

On a somewhat related matter, I am doubly interested right now in other seemingly very modern ideas percolating around that very time. I am just reading H. G. Wells’s novel, The World Set Free, written in 1913, in which he imagines a future war between France and Germany. That in itself did not take too much imagination, but he describes how the two competing powers use what he terms “atomic bombs,” delivered by aircraft. He has detailed accounts of nuclear chain reactions, and the lasting effects of radioactivity on the ruins of Paris and Berlin. In 1913. 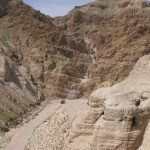 May 12, 2017
Alternative Scriptures: The First Discovery of Qumran
Next Post 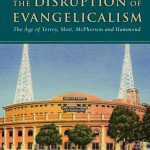 May 16, 2017 What's the Future of the Evangelical Past?
Recent Comments
0 | Leave a Comment
"Mark Noll wrote that "the scandal of the evangelical mind is that there isn't one." ..."
Karen Silver Can Northern Evangelical Institutions Survive Evangelicalism’s ..."
"Philip, have you seen The Wailing? A 2016 Korean horror movie that makes great use ..."
Aaron Belz The Satyr Shall Cry To His ..."
"I know you couldn’t cover everything in such a brief history of evangelicalism, so I ..."
Roger McKinney Can Northern Evangelical Institutions Survive Evangelicalism’s ..."
"Dr. Barr,I believe Dr. Doug Oss was one of the contributors of notes to the ..."
Brian Roden Deconstructing the ESV: A Historian’s Response ..."
Browse Our Archives
get the latest updates from
Anxious Bench
and the Patheos
Evangelical
Channel
POPULAR AT PATHEOS Evangelical
1