Five Rivers Flowing Out Of Paradise

Five rivers flowed out of Paradise, and we all know their names. That may sound like a riddle, but it actually points to some truly radical interpretations of Scripture, and maybe even to a revolution in Western thought. It also suggests one possible outcome of the Radical Reformation.

The story involves Gerrard Winstanley (1609-1676), the legendary seventeenth century English radical and mystic, who in 1648-1649 led the communal sect of the Diggers, or True Levellers. Both the Diggers and Winstanley have attracted a vast and probably disproportionate literature in their time, as they were long seen as the forerunners of virtually every radical, anarchist, communist, utopian and even hippie movement in the later English-speaking world. In the 1960s, San Francisco had its thriving Digger movement. There is a wonderful novel about Winstanley and his movement, David Caute’s Comrade Jacob (1961), which became the source of Kevin Brownlow’s 1975 film Winstanley. Although this is a low-budget item, it is nevertheless one of the great fictional treatments of the Early Modern era. Comrade Jacob, incidentally, is a superb teaching tool in classes on the era.

The problem with putting so much emphasis on man and movement is that they were very marginal indeed at the time, and after their peak in the late 1640s, the Diggers were pretty much entirely forgotten for two centuries. Winstanley himself moved on from ultra-radicalism to become a respectable Quaker merchant, to the horror of his modern radical admirers.

On a personal note, I once scored a minor historical coup by turning up what might be the only reference to anyone actually reading Winstanley between roughly 1660 and 1800. I was looking at a group of Dissenting ministers in south Wales in the 1770s and 1780s who were lending each other books by mystics like Jacob Boehme, and there on the list of authors circulated was none other than Gerrard Winstanley. The find even earned me a nice letter from the legendary historian of the era, Christopher Hill.

Winstanley owes his reputation to some tracts that he published, especially The True Leveller’s Standard Advanced, Fire in the Bush and The Law of Freedom in a Platform. In these, he used strictly Biblical language to present a truly radical message. To oversimplify, humanity originally possessed Paradise, but lost it through a belief in the self and in individual property, and lust for possession. Restoration could only come when people abandoned property, selfishness and covetousness, and once more shared the blessings of the earth in common. Eliminating property and inequality was Levelling, and that  idea is what motivated the movement to occupy and dig their common lands

Every single man, Male and Female, is a perfect Creature of himself; and the same Spirit that made the Globe, dwells in man to govern the Globe; so that the flesh of man being subject to Reason, his Maker, hath him to be his Teacher and Ruler within himself, therefore needs not run abroad after any Teacher and Ruler without him, for he needs not that any man should teach him, for the same Anointing that ruled in the Son of man, teacheth him all things.

But since humane flesh (that king of Beasts) began to delight himself in the objects of the Creation, more then in the Spirit Reason and Righteousness, who manifests himself to be the indweller in the Five Senses, of Hearing, Seeing, Tasting, Smelling, Feeling; then he fell into blindness of mind and weakness of heart, and runs abroad for a Teacher and Ruler: And so selfish imaginations taking possession of the Five Senses, and ruling as King in the room of Reason therein, and working with Covetousness, did set up one man to teach and rule over another; and thereby the Spirit was killed, and man was brought into bondage, and became a greater Slave to such of his own kind, then the Beasts of the field were to him. (The True Leveller’s Standard Advanced)

Or as Winstanley says in Fire in the Bush,

For as the great Earth, and the inferior creatures therein are as the Commons Forrests, and delights of God in the out Coasts of the Creation; Even so Mankind. The living Earth is the very Garden of Eden, wherein that spirit of Love, did walk, and delight himself principally, as being the Head and Lord of all the rest. In this Garden are five Rivers. Hearing, Seeing, Tasting, Smelling, Feeling; which we in our age of the world, call five Senses; And these five water springs, doe refresh and preserve the whole Creation, both of the out coasts, and of the Garden. … [my emphasis]

Although humans fall by succumbing to delusion and imagination, salvation is possible:

This is the blessing of Abraham, the promised Seed, that remains within, as a servant for a time, times, and dividing of time; then he is to arise and cast out the Dragon, and to purge out that drossy imaginary power, that is crept in to defile the Creation; And so properly he is called the restorer, Saviour, Redeemer, yea and the true and faithfull Leveller. And when this tree of Life is fed upon and delighted in, (by the five Senses, which is the Creation, Mankind, or the living Soule.) Then these five Rivers are called pure Rivers of the waters of life; for the life of truth and peace is in them, and they are the sweet conveyers of the waters, or breathings of life, from one to another through the whole body: and so bringing all into a oneness, to be of one heart and one mind; And there is but one God and King in all, and among all, who is Michael our Prince of peace.

Before anyone says it, Genesis 2 actually speaks of four rivers out of Paradise, namely Pishon, Gihon, the Tigris, and the Euphrates. But Winstanley needed there to be five, so five there were.

There is so much going on here, but see how Winstanley is transforming the Genesis story into a strictly contemporary, material story, in which the action occurs within the soul and mind of each individual. There need be no external deity. The Maker is Reason, which Man should obey, and did before his Fall. The Earth itself is the Garden of Eden, and out of it run five rivers – the five senses. These are the means by which we comprehend the World, which is Eden, and which we come to misunderstand through our focus on individualism and the idea of Property. Eden, the World, is where the Fall occurs, and where it must be restored. Spiritual and psychological interpretations merge inextricably.

Although Winstanley is a mystic, absolutely immersed in Godspeak, he is laying a firm foundation for a purely materialistic view of the world, of social behavior, and of political action.

That theme of the five senses having their roots in Paradise is actually quite common, among authors and sources who assuredly did not know of each other. For a parallel, look at the second century Gospel of Thomas, which Winstanley could not have known. Verse 19 reports Jesus’s saying that

Blessed is that which existed before coming into being. If you exist as my disciples and listen to my sayings, these stones will minister unto you. Indeed, you have five trees in Paradise, which do not move in summer or winter, and whose leaves do not fall. Whoever is acquainted with them will not taste death.

Well, these are trees not rivers, but is this not an obvious parallel to Winstanley’s meaning? I think the five trees are five senses, and only properly purified can they lead back to a Paradisiacal state, of original innocence. That idea has a long history, which runs through the Gnostics, the medieval European Brethren of the Free Spirit, and the English Ranters. To quote Marvin Meyer, “The five trees in Paradise are mentioned frequently in Gnostic texts, ordinarily without explanation or elaboration. In Manichaean Psalm Book 161,17-29, it is said that various features of life and faith are put together in groups of five. This section opens with the statement, ‘For [five] are the trees that are in paradise [. . .] in summer and winter.’ ” (The Gospel of Thomas: The Hidden Sayings of Jesus, pp. 77-78).

As in Buddhist traditions, enlightenment or liberation occurs when one achieves true awareness of reality, and can use the senses to recognize the present moment, without dwelling in either present or past. As that latter-day Gnostic William Blake famously observed, “If the doors of perception were cleansed, every thing would appear to man as it is, infinite. For man has closed himself up, till he sees all things thru’ narrow chinks of his cavern.” Only then can the mystic return to Paradise, to primordial reality.

From a very different perspective, Origen discussed the story of Joshua hunting down five enemy kings who took refuge in a cave. Obviously, he thought, these foes were sight, smell, hear­ing, taste, and touch, the senses through which sins can arise. In the past, these kings had held dominion in the cave of the human mind, but Joshua/Jesus defeated them and raised the spiritual banner.

As to pursuing the logic of this process, or its use of scripture, I would cite W. H. Auden’s classic remark, “I don’t think the mystical experience can be verbalized. When the ego disappears, so does power over language.” Don’t look for consistency. But do look out for other examples of those five rivers, or five trees. Eden is within. 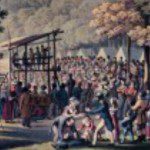 July 27, 2017
Who has the power to recalibrate the “Evangelical Paradigm”?
Next Post 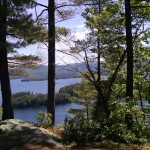 July 31, 2017 What to do about what's wrong with America
Recent Comments
0 | Leave a Comment
Browse Our Archives
get the latest from
Anxious Bench
Sign up for our newsletter
POPULAR AT PATHEOS Evangelical
1