I have been writing about the early Christian church around 200 AD, and how surprisingly “Catholic” it already looked in terms of its attitudes towards clergy and priesthood. Even the idea of clerical celibacy appears in rudimentary form, considerably earlier than we might commonly think. Whatever he intended, already by 200 the great Church father Tertullian was offering manifestos for a celibate priesthood.

In recent historical writing, we often hear that the celibacy requirement emerged only in the Middle Ages, as churches tried to prevent priests forming families who would develop a claim to church land. According to this view, clerical celibacy was an invention only of the eleventh century, relatively late in the Christian story. That view is only partly correct. In fact, ideas of clerical celibacy were strongly apparent much earlier in church history, no later than the third and fourth centuries. The clearest evidence of the new attitudes is found in the Council of Spanish clergy held at Elvira, at the start of the fourth century, or possibly a few years earlier. At least for this local body, all ordained clergy were already required to be celibate, the only room for debate concerning the lowest ranks of deacons. That idea spread throughout the Western church no later than 400, and was enforced for some centuries. At least for parish priests, that requirement then dropped out of use before being revived in medieval reform movements.

Ideas of clerical celibacy emerged gradually. The New Testament shows no suggestion that church leaders were required to be celibate, and Peter had a mother in law. In the 190s, Clement of Alexandria explicitly acknowledged married priests and deacons, provided they lived responsibly and morally. If clerical sexuality was an issue at this time, the grievance of stricter-minded reformers was not that clergy were marrying but rather that they were remarrying after the death of the first spouse. For Fathers like Tertullian or Hippolytus, monogamy meant that a first marriage was for eternity, and no further unions could be accepted. Bishops who did remarry should in this view be removed from office, although they were not in practice. Tertullian denounced twice-married clerical “digamists” as flouting morality, just as clearly the scandalous bishop in his time who had committed pederasty.

Tertullian did not believe in clerical celibacy in anything like the medieval sense. But he did use language that later generations could and did use to that  purpose. Partly, this was because he was borrowing ideas from extremely strict sects like the Montanists, or the Encratites who forbade sexual activity to anyone who considered themselves true Christian believers.

Tertullian’s high-flying rhetoric provides remarkable evidence of changing ideals in the mainstream church, and not for the first time, he appears to be laying the foundation of much later Catholic theology. Tertullian certainly accepted the legitimacy of sexuality expressed within proper limits, and in a tract addressed To His Wife, he offered high praise of Christian marriage. But even in that work, he speaks highly of continence or celibacy as an ideal. In his Exhortation to Chastity, written around 210, he addresses a Christian man whose wife has died. He urges him not to remarry, but most of his arguments actually work equally well in favor of total celibacy, especially for clergy. He mocks the argument that “But Christians concern themselves about posterity!” commenting “to [Christians] there is no tomorrow! Shall the servant of God yearn after heirs, who has disinherited himself from the world?”

Pursuing his logic, he ends with an explicit argument in favor of optional celibacy, rather than merely avoiding remarriage. He gives many examples of pagan priests and holy people who practiced not just chastity, but active celibacy, and notes hopefully that some Christian clergy were already following their example (ch.13)

“How many men, therefore, and how many women, in ecclesiastical orders [in ecclesiasticis ordinibus], owe their position to continence [continentia], who have preferred to be wedded to God [qui deo nubere maluerunt]; who have restored the honor of their flesh, and who have already dedicated themselves as sons of that [future] age, by slaying in themselves the concupiscence of lust, and that whole [propensity] which could not be admitted within Paradise! Whence it is presumable that such as shall wish to be received within Paradise, ought at last to begin to cease from that thing from which Paradise is intact.”

Or as he wrote To His Wife about chaste and celibate pagans, “These precepts has the Devil given to his servants, and he is heard! He challenges God’s servants, by the continence of his own, as if on equal terms!” He continues,

“To us, continence has been pointed out by the Lord of salvation as an instrument for attaining eternity [instrumentum aeternitatis], and as a testimony of [our] faith; as a commendation of this flesh of ours, which is to be sustained for the “garment of immortality,” which is one day to supervene; for enduring, in fine, the will of God.”

The language of being “wedded to God” foreshadows later monastic language, with nuns still being described as “brides of Christ.” But such passages, and especially the larger Exhortation to Chastity, deserve closer examination. In remarking that sexual intercourse is absent from Paradise, Tertullian comes close to suggesting that it is incompatible with the hope of achieving that Paradise. This is radical language indeed, and it would have a long subsequent history. Tertullian’s Latin use of continentia is virtually identical with the contemporary Greek egkrateia, the core principle of Encratism.

Tertullian was certainly drawing on sectarian and especially Montanist ideas, even if he was not yet a wholehearted convert. But even within the orthodox mainstream church, the idea that sexuality was incompatible with holiness gained popularity during the third century. Partly, this reflected a growing sense of the power of the Eucharist, and the expansion of celebrations to a daily basis. If a priest or bishop was expected to be celibate before celebrating that rite, and if it occurred in a daily or near daily basis, that de facto demanded strict, permanent, celibacy. As that practice spread, so later Christians, especially in the West, found in Tertullian’s writings an eloquent manifesto for celibacy. No later than 250, Christian monasticism originated in Egypt and Syria, and spread very quickly in both regions. Hermits and solitaries naturally rejected sexuality.

I am not arguing simplistically that “The Montanists invented priestly celibacy” (a position actually adopted by some modern opponents of mandatory clerical celibacy, in order to discredit the practice). Rather, the idea arose most vigorously on the sectarian margins of orthodoxy, but they could only have won mainstream acceptance if they reflected deeply held ideas of the time. What gave those themes special power and influence was their expression by such an influential thinker as Tertullian, who gave them entrée into Latin-speaking Christendom. 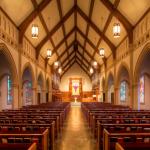 February 20, 2018 When Did Evangelicals Start Observing Lent?
Recent Comments
8 Comments | Leave a Comment
Browse Our Archives
get the latest from
Anxious Bench
Sign up for our newsletter
POPULAR AT PATHEOS Evangelical
1

Deep State, Deep Market, Shallow Jesus, Shallow Church
Different attempts have been made to define and reflect upon “deep state”....
view all Evangelical blogs
What Are Your Thoughts?leave a comment
Copyright 2008-2020, Patheos. All rights reserved.