The Politics of “Christianity”: An Interview with Matthew Bowman

The Politics of “Christianity”: An Interview with Matthew Bowman April 12, 2018 johnturner

Matthew Bowman is a historian whose work ranges widely over the intersection of religion, politics, and culture in the United States of the past two centuries. Today’s post is an interview with him about his most recent book, Christian: The Politics of a Word, just published from Harvard University Press. 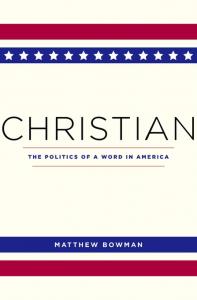 Let’s start at the end of the story. One of the things I like about your book is your reminder that words matter a great deal in politics, and that the way they matter changes over time as a result of the attempt of different groups to define them. For example, I found it interesting in the 2016 campaign that Hillary Clinton consistently described herself as a “Methodist” rather than a “Christian.” Is that because “Christian” has become a dirty word among secular Democrats?

I open the book with, among other things, a discussion of the horror writer Anne Rice. Early in the Obama administration she wrote a widely publicized Facebook post in which she declared that though she believed that Jesus Christ was her savior she was not a Christian, because Christians were anti-gay, and anti-Democrat, and anti-women.

This is not to say that I think the Religious Right doesn’t have claim to the term; that would be a theological judgment, and that’s not what the book does. Rather, I think Christianity is an essentially contested concept, and I try to let it hang in endless dispute rather than try to define it myself.

The book explores what the word “Christianity” meant to black nationalists, to Catholics who rejected capitalism, to new religious movements that engaged in radical sexual experimentation; to spiritualists and civil rights leaders and Ronald Reagan alike. I think that one of the most interesting things about American Christianity is how hard the term is to define, and its meaning has changed so much over time precisely because it’s been such a rich source of material for a variety of political positions. To reduce it to contemporary social conservatism is to let a very deep well run dry.

As of the 1960s, many Americans — civil rights activists, Catholics, New Evangelicals — wanted to make the United States more “Christian.” How, then, was the Religious Right so able to coopt the popular meaning of “Christian?”

This is a complicated story, and it’s one that I think my book—or perhaps any book—could answer only in part. One reason is that after World War II, “Christianity” in America became a capaciously broad term, even one qualified as “Judeo-Christianity” at times, in order to rally as many people as possible behind a broad consensus about the sacred nature of freedom and individualism that would serve the nation in its confrontation with communism. Indeed, as religious pluralism in the United States increased during the 1960s, some American Christians—often the inheritors of the liberal Protestant tradition that brought us Columbia’s Contemporary Civilization course—became ever more reluctant to use the word “Christian;” the Cold War consensus had outgrown itself, in a way.

You see this in figures like Robert Bellah and Jimmy Carter, both of whom desperately believe in the ideals of human dignity and democratic deliberation that the liberal Protestants at Columbia were willing to call Christian. But Bellah and Carter are much less willing to use what had become sectarian terminology in the public sphere. Bellah calls it “civil religion” instead. Jimmy Carter calls it a crisis of confidence.

One of the starting points of your book is the creation of a course in “Contemporary Civilization” at Columbia University. How did those who taught the course understand its content? When did universities such as Columbia abandon the idea?

This course emerged from a broader program called “War Issues” that the Wilson Administration developed with American universities nationwide in 1917 and 1918. The goal of “War Issues” was to provide and propagate an ideological justification for American involvement in the war, and notions of religion had a lot to do with it. Frank Aydelotte, the educator who coordinated the program, wrote that one of the questions often asked by American soldiers was “Why does the world look upon Luther as so great a reformer if Germany has no sound Christianity now?” The question reflected prevailing opinion—certainly vehement among conservative American Protestants but also widely shared among liberal Protestants as well—that Germany had sacrificed its Christianity on an altar of industrialism and efficiency, and that this had led the world into war.

Therefore, one of the key aims of the War Issues course, and the Contemporary Civilization course which evolved from it at Columbia, was to foster a new understanding of an old phrase: “Western civilization.” In the telling of Contemporary Civilization, “Western civilization” emerged from the intertwining of Protestant religion and political democracy, two ideologies which enabled each other and both of which had to be vital for either to survive. It’s important to recognize that the educators at Columbia were not conservative Christians in any real sense of the word; rather, they tended to be liberal or even nonchurchgoing Protestants. Their opinions were hardly, then, marginal.

The class was, of course, the ancestor of our contemporary (or not so contemporary, anymore) Western Civ courses, and Contemporary Civilization’s bones—the steady movement west and north, following Catholicism until the Reformation and blending Protestantism into the rise of democracy, from Greece to England—underlay nearly every Western Civ textbook through the twentieth century.

Throughout your book, it seems that the idea of Christian Civilization was most useful when defined against something. You explain that this “something” was most typically some sort of “materialism.” What do you mean by that term?

“Materialism” could mean whatever Christians who feared it wanted it to mean. Generally, the label was given to ideologies or institutions that seemed to lack the elements of “Christianity.” In the United States this has nearly always meant the mistreatment of human beings, because for Christians “Christianity” is the source of human dignity. But to different sorts of Christians different crimes have seemed the worst. To liberal Protestants, materialism meant institutions that neglected human liberty. To Roman Catholics it meant that, but also institutions that placed profit before human welfare. To African Americans, it meant slavery and racial discrimination that reduced human beings to objects.  The interesting thing is that to all these Christians “materialism” was also the death of democracy, because democratic government required the faith in humanity that Christianity provided to survive. 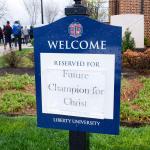 April 11, 2018
Falwell vs. Claiborne: A Report from Lynchburg
Next Post

April 13, 2018 The Dancer and the Hero
Recent Comments
1 Comment | Leave a Comment
"I wish I had answers, John, but instead I have the same question. It's not ..."
Alex Burgess The Evangelicalism I Love
"Yawn"
odgie The Cost of Complementarianism: An Interview ..."
"All that time and resources Religion wasted should have instead been given to Science. The ..."
Christian The Cost of Complementarianism: An Interview ..."
"We are privileged to be living in an era where education is realizing its potential ..."
Dr.Cajetan Coelho Martin Luther King, Jr. and the ..."
Browse Our Archives
get the latest from
Anxious Bench
Sign up for our newsletter
POPULAR AT PATHEOS Evangelical
1