I am here reprinting and adapting a column I wrote for this blog back in 2013.

This coming Sunday, May 20, the church celebrates the great feast of Pentecost, with all its rich imagery of fire from heaven, tongues of flame, and speaking in tongues. In the Western tradition at least, the day marks the church’s birthday. In old English, it was called Whit (White, or Holy) Sunday. Italians traditionally called it Pascha Rossa, Red Easter, giving some idea of its significance in the church calendar. In the Orthodox churches, the feast carries a significance second only to Easter.

Around the world, Pentecost is associated with some lovely and intriguing customs, including for instance:

In Italy it was customary to scatter rose leaves from the ceiling of the churches to recall the miracle of the fiery tongues …. The Italian name Pascha rossa comes from the red colors of the vestments used during today’s Solemnity. In France, it was customary to blow trumpets during the Divine Service, to recall the sound of the mighty wind that accompanied the Descent of the Holy Spirit.

Pentecost became the focus of many Spring customs. In different parts of rural Europe, Pentecost was traditionally associated with trees, especially the birch: Pentecost trees were planted, people made birch wreathes.

But where does the Pentecost idea come from? Although the familiar story that we know is in the Book of Acts, the Gospel of John manages to tell the story about Christ giving the Spirit without a word about tongues of fire, the rushing wind, or speaking in tongues. All that John says is “[Christ] breathed on them and said, ‘Receive the Holy Spirit’” (John 20.22).

We have to read the Acts account in terms of Luke’s two related books, his Gospel, and the Book of Acts, both written at the end of the first century. The two works have a neat symmetry. The Gospel begins and ends in Jerusalem, in the Temple, with people faithfully following the Jewish Law. In the sequel, Acts, we also begin in Jerusalem – but we end in Rome, as the church is set to spread throughout the world. Luke’s Gospel is set in the Jewish world, but Acts tells how God’s message breaks the bounds of Judaism and reaches out to all peoples. Pentecost is the turning point. It’s a book about breaking out, but also about breaking in – of God’s power breaking into the world.

Luke, like many early Christians, used a familiar Jewish model to understand Christ and his mission. In Judaism, Passover was one of the greatest feasts of the year, and all the evangelists put Christ’s death against a Passover framework. But Passover itself has a sequel, which occurs seven weeks later, or rather fifty days – in Greek, Pentecost.

This second feast is Shavuot (“Weeks”), which was originally a Spring harvest festival. Over the centuries though, Shavuot acquired an extra and more exalted meaning, as it commemorated the giving of the Law, the Torah, on Mount Sinai. This was in a sense the birthday of the Torah. Jewish scholars believed that the Law was given in seventy different languages, that is, in each of the languages of the world’s different people.

Jews today read the Book of Ruth at Pentecost, because it brings together all the day’s main themes – someone embracing Judaism and its Torah; a harvest; and even an association with King David, who was Ruth’s descendant. In legend, King David even died on Pentecost.

That all helps us understand the Acts story, which concerns the giving of a new Law. After the apostles receive the Spirit, they speak in tongues, in different languages. Acts then lists the peoples who were present in Jerusalem at the time, and these correspond to all the major ethnic groups that a Jew of that time might have known. The list, in other words, means that “everyone in the world” was already present to hear the apostles, and was moreover able to hear and understand them.

So the new Law has arrived, symbolized by a breaking through of heavenly power into the world. Acts tells us much about these gifts of healing, miracle-working and prophecy – and the Greek word for “gifts” is charisma, which gives us “charismatic.”

But it’s also a very different kind of spiritual power from anything known before, in that it is freely accessible to all, and not just the rich or educated. The apostles’ first sermon after the Pentecost experience is based on some powerful verses from the otherwise obscure prophet Joel, who foretells how heavenly power will descend on the young, not just the old, and on women as much as men:

In the last days, God says, I will pour out my Spirit on all people.

Your sons and daughters will prophesy, your young men will see visions, your old men will dream dreams.

Even on my servants, both men and women, I will pour out my Spirit in those days, and they will prophesy.

This was revolutionary stuff. And in case anyone missed the point, the new world coming so explosively into existence would sweep away the old. The Pentecost message is explicitly apocalyptic, proclaiming the end of the old world and the Second Coming. Remember, we are “In the last days.” As God warns, in these times,

I will show wonders in the heavens above and signs on the earth below, blood and fire and billows of smoke. The sun will be turned to darkness and the moon to blood before the coming of the great and glorious day of the Lord.

Pentecost focuses on the giving of a new law for a wholly new world, while also looking to the End Times. 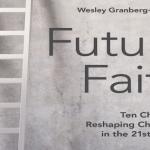 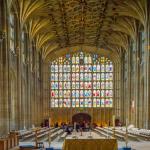 May 19, 2018 The Centuries-Old Words of a Modern Royal Wedding
Recent Comments
0 | Leave a Comment
Browse Our Archives
get the latest updates from
Anxious Bench
and the Patheos
Evangelical
Channel
POPULAR AT PATHEOS Evangelical
1