In my previous posts, I have discussed the 1668 novel The Adventures of Simplicius Simplicissimus – hereafter, just Simplicissimus – by Johann von Grimmelshausen. The book is a treasure trove for all sorts of ideas and themes about the seventeenth century, and much of it can be applied to understanding early modern Europe, between about 1500 and 1750.

Some of the political material is striking, and one example in particular is really intriguing. In a lengthy section, Simplicissimus captures divine Jupiter as a prisoner – or more likely, a flea-infested lunatic who thinks he is Jupiter. The god (or crazy man) outlines an intoxicating scheme to send a mighty German hero who will unite the known world under German rule, using what we can only call a super-weapon. He would unite Christian denominations, smash Islam, and create a Golden Age. The idea of Jupiter prophesying future glories obviously derives from Virgil’s Aeneid (I 257-296), but this is an utterly different context and format.

In many ways, the Jupiter Prophecy fits the mood of the time of writing, the 1660s, in its millenarian and messianic mood. Such ideas had been especially strong in England during the revolutionary 1650s, when many thinkers had latched on to the year 1666 as marking the End Times. Largely through trading connections, those ideas spread far afield, and powerfully influenced Rabbi Sabbatai Zevi, (or Shabbethai Zebi b. Mordecai), who by 1659-1660 was proclaiming himself the Jewish Messiah. For both Christians and Jews, those breathless expectations were very much in the air by the mid-1660s.

Even so, the vision in Simplicissimus seems very distinctive, and quite remarkable for its time. Visions of the end of the world were plentiful in this era, but the vast majority of them, surely, were explicitly Christian (or Judeo-Christian)  and Biblical in a way this is not. They usually ended with Christ, with Jesus as king, with the thousand year reign, and so on. This conspicuously does not. Nor does it draw on something like Joachim of Fiore and his visions of the last days. I can in fact offer a lengthy list of the visionary traditions around in the early modern era that this account ignores. It is not non-religious, but it really is not Christian at its core. Unusually, the prophecy is placed in the words of a pagan god, and not a Biblical prophet or an apostle, or even a famous Christian visionary. Even the great city with its new Temple is not New Jerusalem, it is something greater.

Actually, the portrait of the Coming Hero has more to do with standard visions of Antichrist, but here treated favorably. This really is odd.

So I am speculating on where in fact this is coming from? We might in fact be dealing with deep undercurrents of popular sentiment that draw vaguely on Christian apocalyptic, but boosted with a dose of Classical schooling, and with a really novel use of intense nationalism. I really would appreciate pointers to help me contextualize this.

I do actually have one theory for where all this is coming from, but I advance it tentatively. In the nineteenth century, Russians fantasized about the coming a great messianic king, a new Constantine, who among other things would conquer Constantinople, destroy Islam, and restore the Roman Empire. Their source for that was a piece of Old Testament Pseudepigrapha called the Apocalypse of Daniel. Without too much confidence, I suggest that either that or some such source lies behind Jupiter’s Prophecy in Simplicissimus. Not much else fits.

To illustrate all this, let me offer some samples of Jupiter’s prophecy.

“I will send such a hero that he shall have need of no soldiers and yet shall reform the whole world; at his birth I will grant to him a body well formed and stronger than had ever Hercules, adorned to the full with princeliness, wisdom, and understanding: …

Vulcan shall, under the influence of Mars, forge for him his weapons, and specially a sword with which he shall conquer the whole world and make an end of all the godless, without the help of a single man as a soldier: for he shall need no assistance. Every town shall tremble at his coming, and every fortress otherwise unconquerable he shall have in his power in the first quarter of an hour: in a word, he shall have the rule over the greatest potentates of the world, and so nobly bear sway over earth and sea that both gods and men shall rejoice thereat. …

Thou knowest not what power my hero’s sword will have; Vulcan shall make it of the same materials of which he doth forge my thunderbolts, and so direct its virtues that my hero, if he do but draw it and wave it in the air, can cut off the heads of a whole armada, though they be hidden behind a mountain or be a whole Swiss mile distant from him, and so the poor devils shall lie there without heads before they know what has befallen them.

So shall he go from country to country, and give each town the country that lies around it to rule in peace, and from each town in all Germany choose out two of the wisest and learnedest men to form his parliament, shall reconcile the towns with each other for ever, shall do away all villeinage, and also all tolls, excises, interest, taxes, and octrois throughout Germany, and take such order that none shall ever again hear of forced work, watch-duties, contributions, benevolences, war-taxes, and other burdens of the people, but that men shall live happier than in the Elysian fields.

“And then,” says Jupiter, “will I often assemble all Olympus and come down to visit the Germans, to delight myself among their vines and fig-trees: and there will I set Helicon on their borders and establish the Muses anew thereon: Germany will I bless with all plenty, yea, more than Arabia Felix, Mesopotamia, and the land of Damascus: then will I forswear the Greek language, and only speak German; and, in a word, shew myself so good a German that in the end I shall grant to them, as once I did to the Romans, the rule over all the earth.”

[The German hero would assemble his lords] and them will he lead through Hungary and Italy into Moldavia, Wallachia, into Macedonia, Thrace and Greece, yea, over the Hellespont into Asia, and conquer these lands for them, give them as helpers all them that live by war in all Germany, and make them all kings. Then will he take Constantinople in one day, and lay the heads of all Turks that will not be converted and become obedient before their feet: then will he again set up the Roman Empire, and so betake himself again to Germany, and with his lords of Parliament (whom, as I have said, he shall choose in pairs from every city in Germany, and name them the chiefs and fathers of his German Fatherland) build a city in the midst of Germany that shall be far greater than Manoah in America, and richer than was Jerusalem in Solomon’s time, whose walls shall be as high as the mountains of Tirol and its ditches as broad as the sea between Spain and Africa.

And there will he build a temple entirely of diamonds, rubies, emeralds, and sapphires, and in the treasury that he shall there build will he gather together rarities from the whole world out of the gifts that the kings in China and in Persia, the great Mogul in the East Indies, the great Khan of Tartary, Prester John in Africa, and the great Czar in Muscovy will send to him. Yea, the Turkish emperor would be yet more ready to serve him if it were not that my hero will have taken his empire from him and given it as a fief to the Roman emperor.”

Then I asked my friend Jupiter what in such case would become of the Christian kings. So he answered, “Those of England, Sweden, and Denmark (because they are of German race and descent), and those of Spain, France, and Portugal (because the Germans of old conquered and ruled in those lands), shall receive their crowns, kingdoms, and incorporated lands in fee as fiefs of the German nation, and then will there be, as in Augustus’s time, a perpetual peace between all nations.”

The hero would then bring together theologians of all denominations to resolve their differences and make a united Christendom. And if they did not succeed, they would face the gallows.

So when unity is arrived at, then will he proclaim a great festival and declare to the whole world this purified religion; and whosoever opposes it, him will he torment with pitch and sulphur or smear that heretic with box-grease and present him to Pluto as a New Year’s gift.

Chaotic times like the Thirty Years War inevitably spawn millenarian and messianic dreams, and they resurface in later times of stress and warfare. The prophecy was for instance reprinted as a tract against Napoleon, and it had its later fascist believers. The Nazis tried hard to appropriate Grimmelshausen and the commemorations of his life and work. In light of what we know about modern German history, of course, that messianic passage reads uncomfortably. 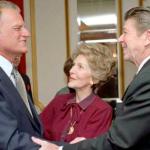 May 31, 2018
The Reinvention of “Evangelical” in American History: A Linguistic Analysis
Next Post

June 4, 2018 The Imponderability of the Past
Recent Comments
2 Comments | Leave a Comment
Browse Our Archives
Follow Us!