How Different Are Mainline and Evangelical Protestantism?

Today I’d like to write less as a historian of the Church and more as a simple member of it, trying to make sense of some similarities and differences within that Body. See, this fall my wife and I changed churches and denominations. While I grew up in the Evangelical Covenant Church, my wife was raised in the Evangelical Lutheran Church in America. We spent our first dozen years together in a Covenant congregation, but have now moved to one in the ELCA. Despite their similar names, scholars and journalists who write about religion would generally recognize my home denomination as evangelical, but not my wife’s. (A habit that bothers at least some Lutherans.) She and her family would be categorized as mainline Protestants.

As I told readers of my own blog, I expected “to be drawn to some aspects of our new church home and put off by others: feeling at once at home and in exile, as a Pietist among Lutherans and an evangelical in the mainline.” True enough, I listened to the fall’s opening sermon series, on how we are called to love God and love our neighbors, and felt myself being let down in unfamiliar but predictable ways. In evangelical churches, I tended to feel like we were emphasizing the first half of the Greatest Commandment, loving neighbors primarily insofar as we could persuade them to love God (as we would love Him). Sitting in a mainline Protestant church, the emphasis flipped: it was unclear if there was any meaningful way to love God other than by loving our neighbors. Hoary old evangelical criticisms about mainliners reducing faith to ethics sprang to mind, if not my lips.

And I was ready to criticize my new church home for failing to spend enough time considering what factors keep us from fulfilling either half of the commandment… when this past Sunday the entire sermon had to do with sin.

Preaching on the story of Nathan confronting David after the death of Uriah, our visitation pastor warned that we neglect our own sinfulness “at the risk of damaging our spiritual health,” for sin disrupts “our loving relationship with God.” He was careful to emphasize that the Christian life is not about “pointing fingers” at other people. Nonetheless, one way we love our neighbors is to be like Nathan: helping them recognize their own self-deception — not to cause pain or guilt, but to permit growth and healing. He quoted Paul’s admonition to the Galatian church: “My friends, if anyone is detected in a transgression, you who have received the Spirit should restore such a one in a spirit of gentleness” (6:1).

It’s precisely the kind of biblical, irenic preaching that I so appreciated in my evangelical Pietist upbringing. And it struck me that if I closed my eyes, I might not realize that I had changed churches.

It’s not just the similarities in preaching, or what both churches call “traditional worship,” or the fact that I’m now singing under a choir director whose compositions and arrangements I sang in the same kind of ensemble at my previous church. If a sociologist of religion looked at the two congregations, she’d immediately notice that both churches are located in first-tier suburbs and share a virtually identical demographic profile (in terms of age, race, and affluence). Fellow historians would probably shake their heads at how the Swedish immigrant origins of one and the Norwegian origins of the other make them seem as similar to outsiders as they would seem different to insiders. And before I guess at the politics of an ELCA church in a deep blue precinct, a political scientist would probably remind me that most white mainline Protestants voted for Donald Trump in 2016. (Though he appears to have lost the support of many of them.)

So while I sympathize with the argument that we shouldn’t simply let theology define evangelicalism, it seems like the same should be true of mainline Protestantism. Whatever an Evangelical Lutheran denomination might affirm in contrast to us other evangelicals, I suspect that non-theological factors do much more to predict the distinctiveness of any particular ELCA congregation.

But there’s another kind of similarity that makes me question our convenient evangelical/mainline binary:

When I hear Hillsong and other CCM mainstays being sung in our new church’s contemporary service… when I see that the translations of Psalm 150:1 and Romans 15:13 painted on the sanctuary walls come out of the ESV, not the NRSV… when our 3rd grade kids are given NIV bibles from Zondervan that start with a Romans Road-like explanation of “How to know you are a Christian”… when they use the same VBS curriculum as the evangelical Baptist church three blocks away…

Well, I wonder how much evangelicalism has been actively shaping an ostensibly mainline congregation.

(And yes, I’ll bet plenty of people in our church shop at the nearby Hobby Lobby.)

Or consider a large ELCA church I know in Iowa… It just adopted the ESV as its new pew Bible, and one of its adult Bible studies is using a book by Ravi Zacharias. It regularly participates in the Willow Creek Summit. In addition to ELCA missions efforts, it supports missionaries connected to evangelical groups like Navigators, Cru, and SEND International. Its own ministry connections include a number of parachurch programs that have evangelical roots or affinities: Financial Peace University, Alpha, MOPS, Promise Keepers.

I don’t think that church hosts Bible Study Fellowship, which affirms “the 66 books of Holy Scripture as originally given are in their entirety the Word of God verbally inspired and wholly without error in all that they declare, and, therefore, are the supreme and final authority of faith and life” (emphasis mine). Neither does our new church home. But one of the BSF meetings nearest to me is at an ELCA church I’ll be teaching this weekend, and another is at the downtown Minneapolis headquarters of what they used to call Thrivent Financial for Lutherans.

Of course, the mainline is not a monolith. These examples from my own experience might not be all that representative.

But they do make me wonder — if I can borrow some language from Kristin — if mainline Protestantism is as much an imagined religious community as evangelicalism, one whose members’ imaginings are shaped by sources other than a denomination that belongs to the National Council of Churches. 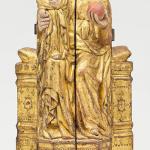