Stay With Us: The Pietism of Hans Nielsen Hauge

The story of the Emmaus Road is really an Easter text, lit by the dawn of Resurrection. But these shortening days of Advent are also a good time to pray the disciples’ plea to the risen Jesus:

That’s how Luke 24:29 was rendered by the late Norwegian composer Egil Hovland in 1996. A staple of choirs here in a part of the country heavily settled by Scandinavian immigrants, we’ll be singing “Stay With Us” at our church’s Christmas concert next month, though I doubt we’ll sound quite as good as the National Lutheran Choir.

What I hadn’t realized, until our director explained it earlier this month, is that Hovland wrote “Stay With Us” as part of an opera about the life of Hans Nielsen Hauge, the Norwegian peasant-turned-preacher who led one of the most remarkable revivals in modern church history.

It began, like many chapters in the history of Pietism, with an unexpected conversion. On April 5, 1796, Hauge later recalled, he was plowing his father’s fields and singing an old German hymn, when suddenly

my mind because so exalted that I was not myself aware of, nor can I express, what took place in my soul. For I was beside myself. As soon as I came to my senses, I was filled with regret that I had not served this loving transcendently good God. Now it seemed to me that nothing in this world was worthy of any regard. That my soul experienced something supernatural, divine, and blessed; that there was a glory that no tongue can utter — that I remember as clearly as if it had happened only a few days ago.

Hauge’s sudden conversion left him feeling “a deep, burning love to God and my neighbor” — but also “a desire that other people should become partakers with me of the same grace.” He asked God how he could serve, and God replied, “You shall confess my name before the people; exhort them to repent and seek me while I may be found and call upon me while I am near, and touch their hearts that they may turn from darkness to light.”

The newly commissioned evangelist made his first converts that same day: two of his siblings. It was the humble beginning of an unlikely revival, one that started at the bottom of Norwegian society and was spread through the publishing and itinerant preaching of Hauge and his followers. “If I met anyone on the road,” Hauge recalled, “I spoke to him about eternal life and how important it is to work out our salvation.” That Norwegian revival was one of the many examples of Pietism reshaping Scandinavian religion in the 19th century, promoting a Christianity that didn’t trust in the passive comfort of what Hauge called “confessional head knowledge” but instead sought “the faith that is given in regeneration.”

Hauge’s movement resulted in more than spiritual changes. It had economic effects, as his message of hard-working self-sufficiency energized farmers and workers beleaguered by the effects of the Napoleonic Wars. And he challenged social mores, especially those surrounding gender roles. Hauge encouraged gifted women to preach and evangelize, citing (like the later Swedish Pietist Fredrik Franson) Joel’s prophecy that God would one day “pour out [his] spirit on all flesh; your sons and your daughters shall prophesy.” But he also rejected both the “poor custom” holding that “cultivating the land and preparing the fruit… are only the job of male persons” and the “proudly accepted custom and contempt for the domestic life among some of male sex, who either do not want to or are ashamed of working with clothing…” (As he walked up and down Norway, Hauge occupied himself by knitting socks and mittens.)

According to Gracia Grindal, the Lutheran scholar who translated Hovland’s opera into English, one scene features upper-class characters “complaining about this upstart with his low morals, his rabble-rousing and, most of all, his encouragement of women’s leadership. One fine lady announces, ‘I know my place. I listen in humility to the shepherd whom God has called and chosen.’ A pastor answers her approvingly, quoting St. Paul on the subject of women keeping silent in the churches. They conclude with a lively polonaise, in which they sing, piously and in fortissimo, ‘God in the highest [would] strike down this ungodly man. Amen, amen, amen!’”

Note that Hovland has state church clergy acting as antagonists. Hauge urged his followers to “fully hold yourselves to our state religion,” but allowed that “If we should be called a sect, then let us show in our lives that we ought to be called the virtuous sect,” rejecting “the vices with which many have dishonored the Christian church….” That exhortation came after Hauge had been imprisoned for 14 years, a victim of the country’s ban on Pietist conventicles and other lay-led religious activity. (The opera’s title in English is Captive and Free.)

And that brings us back to “Stay With Us”: it’s sung by Hauge’s followers as they keep vigil outside their leader’s prison cell. The Luke 24 prayer brackets a lovely soprano-alto passage — a paraphrase of John’s gospel that Hovland fittingly entrusts to women:

Jesus Christ, the world’s true light!
Shine so the darkness cannot overcome it

Let your light pierce the darkness
and fill the church with its glory.

In the decades after Hauge’s 1824 death, many of his followers joined the million Norwegians who migrated to the United States. With a few exceptions, the churches, colleges, seminaries, and other institutions they founded have been absorbed into what’s now the Evangelical Lutheran Church in America. At least in Grindal’s telling (I’m quoting a 2002 column for Christian Century), Hauge’s legacy has lost most of its luster in the ELCA:

Some say that if Hauge had lived in a Catholic country, he would have been sainted. Yet he and his movement the subject of derision. Theologians are scornful of his lack of theological sophistication and of his admittedly fierce legalism…. Hauge is still derided by many who know nothing about him but sense that he is threatening something deep in them. Theological students, for example, have been known to celebrate Hauge’s birthday by carousing in front of his bust and otherwise mocking and deriding his legalism.

It’s one variation on a theme that Grindal lamented in a 2012 symposium at Bethel University: how the “liturgical, confessional, and now politically engaged Lutherans” who lead the ELCA “run almost all of the institutions built by the sweat of our pietistic grandparents’ brows… none of which boast, maybe even know, of their Pietist origins.” In a sense, this is to be expected of Pietist revivals like Hauge’s:

That warm, rich experience of the Lord, of a life lived in joyful obedience to him, and the neighbor, a personal and individual experience, simply cannot be passed on to the next generation through doctrine or structure. Later generations inherit this living Christianity as a set of rules; it becomes a legalistic way of life that irritates and enrages those who have not had that original experience of the living God.

As Mark Pattie and I argued in our book, The Pietist Option, Pietism has largely left the American religious scene “not because it failed, but because it succeeded.” We likened Pietism to yeast, a catalyst for individual and social change that “can work its way into a Christian movement, enhancing what’s already there while leaving few traces of itself.” But Grindal suggests how Pietism may instead leave behind a distasteful residue, like the dour legalism that most contemporary Lutherans associate with Haugeanism.

Still, if one lesson from Pietist history is that it’s impossible to sustain the convertive piety of living faith within organizational, legal, or ecclesial structures, another is that new life, like new birth, comes unexpectedly. Even in her dire 2012 reflection, Grindal hoped that something like Hauge’s revival could happen again:

That experience of the holy changed [Hauge] utterly, and then Norway, and Norwegian Lutherans in this country. While we can’t demand that the Spirit descend like that, we can pray that it will. We can tell the story and teach it… Have we been suppressing the very thing that our young people are looking for with all their hearts: authentic biblical Christianity, living Christianity, in living congregations, Christianity engaged in relieving suffering, bringing Christ to the world, a devotional life that nurtures and feeds and helps in their daily lives with their families? In other words, Pietism…

Something is rumbling underfoot. Is it terror,paganism, or some deep spiritual longing that the Spirit is firing up? I don’t quite know, and though I am tempted to despair, I can’t. The Spirit has a way of working, making and breaking our pasts and futures. 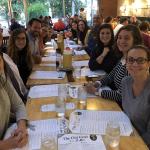 November 28, 2018 How To Get Into A History PhD Program
Recent Comments
1 Comment | Leave a Comment
Browse Our Archives
Related posts from Anxious Bench