A noble impulse lurks in the heart of the young when they take “capitalism” to task in the name of “socialism.” Certainly many aspects of a free-market economy merit criticism, as no less a figure than Adam Smith trenchantly recognized. I only wish these criticisms today came with more discerning historical knowledge about the miserable record of real-existing socialism, especially the Marxist species: the USSR, China, North Korea, Vietnam, and, more recently, Venezuela. How many times can Marxism be said to be betrayed by actual governments before one wonders if the problem lies in the theory as much as the practice?

Marxist-inspired socialism in the twentieth century also has an abysmal track record when it comes to religion. The well-documented persecution of Christians and members of other faiths is, too, traceable to the theory—in this case, in Marx’s view of religion as the “opiate of the masses” awaiting obliteration by the coming revolution. Lenin operationalized this world-view into state-sponsored atheism after 1917; Stalin, Mao, Castro, among others, followed suit often with devastating effects.

But these leaders and their henchmen failed to recognize what the Polish philosopher Leszek Kolakowzki (arguably socialism’s greatest defender before he became its greatest critic) put spot-on:

“Mankind can never get rid of the need for religious self-identification: who am I, where did I come from, where do I fit in, why am I responsible, what does my life mean, how will I face death? Religion is a paramount aspect of human culture. Religious need cannot be ex-communicated from culture by rationalist incantation. Man does not live by reason alone.”

Nonetheless, Soviet leaders tried to abolish faith for much of the twentieth century until Mikhail Gorbachev came along and set in motion the USSR’s own abolition.

The opening of the Soviet archives in the 1990s has produced much meritorious scholarship. But no major synthetic work on Soviet atheism has appeared.

Recently, I’ve come across Victoria Smolkin’s well-researched and well-written A Sacred Space is Never Empty: A History of Soviet Atheism (Princeton University Press, 2018). I am reading it now, and so far can heartily recommend it. Here is the cover’s description:

“When the Bolsheviks set out to build a new world in the wake of the Russian Revolution, they expected religion to die off. Soviet power used a variety of tools–from education to propaganda to terror—to turn its vision of a Communist world without religion into reality. Yet even with its monopoly on ideology and power, the Soviet Communist Party never succeeded in overcoming religion and creating an atheist society.

“A Sacred Space Is Never Empty presents the first history of Soviet atheism from the 1917 revolution to the dissolution of the Soviet Union in 1991. Drawing on a wealth of archival material and in-depth interviews with those who were on the front lines of Communist ideological campaigns, Victoria Smolkin argues that to understand the Soviet experiment, we must make sense of Soviet atheism. Smolkin shows how atheism was reimagined as an alternative cosmology with its own set of positive beliefs, practices, and spiritual commitments. Through its engagements with religion, the Soviet leadership realized that removing religion from the ‘sacred spaces’ of Soviet life was not enough. Then, in the final years of the Soviet experiment, Mikhail Gorbachev—in a stunning and unexpected reversal—abandoned atheism and reintroduced religion into Soviet public life.”

I hope this might whet your appetite. I plan to write more fully on the book at a later point. 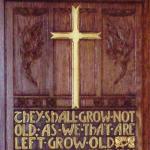 December 18, 2018 They Shall Not Grow Old: WWI According to Peter Jackson
Recent Comments
3 Comments | Leave a Comment
Browse Our Archives
get the latest from
Anxious Bench
Sign up for our newsletter
POPULAR AT PATHEOS Evangelical
1