Faith, Fertility, and the Remaking of Islam

I am using a map to illustrate some long term megatrends in the history of religion. Although the map specifically concerns Islam, many of the same lessons apply to Christianity.

The map appeared in Samuel M. Zwemer, The Moslem World (New York: Young People’s Missionary Movement of the United States and Canada, 1907-1908). Samuel Marinus Zwemer (1867-1952) was an exceptionally important figure in the US missionary world at that time. “Sixteen years a missionary in Arabia,” he earned the title of “Apostle to Islam.” He founded and edited a journal, The Moslem World: A quarterly review of current events, literature, and thought among Mohammedans and the progress of Christian Missions in Moslem lands. I stress that his map is no fresh discovery of mine, as it has been around the Internet for a while. 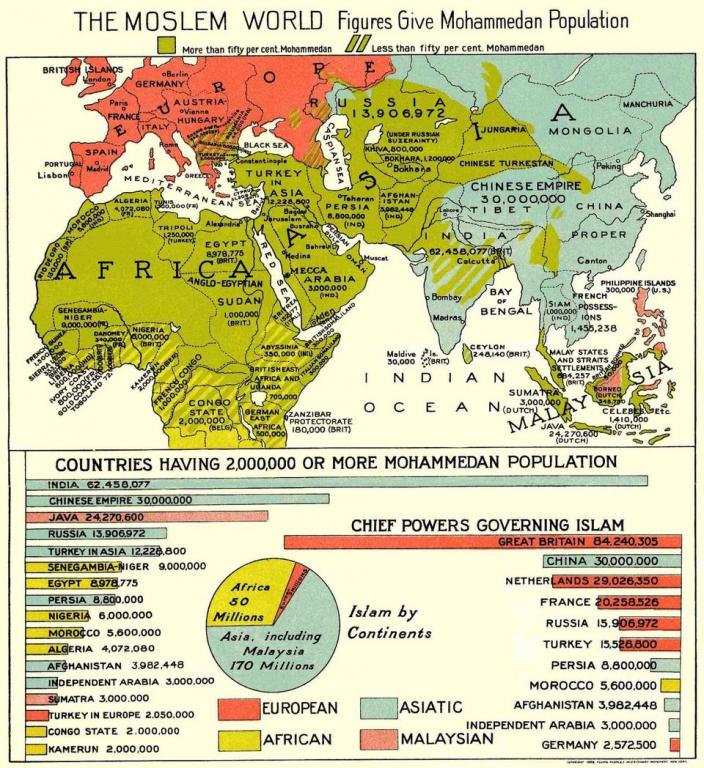 As you see, the map gives estimates for Muslim numbers around 1908, and a couple of salient points emerge. The first is that not all the figures are too reliable, and the Chinese one in particular is way off anything plausible. That thirty million is perhaps double the scale of other guesstimates, and I am going to adjust the overall statistics accordingly. But the other figures are all highly plausible, and for the sake of argument, let is assume that they are more or less correct. What can we learn from that?

One critical point concerns political sovereignty, at a point not that far back in history when the vast majority of Muslims were still subject of the European empires. In that sense, the world’s largest Muslim powers were the empires of Britain, the Netherlands, France, Russia … Look how far down the list you have to go before you find an independent Muslim power, with the Ottoman Empire and Persia. That vast majority of Muslims served European empires, all of which were to some degree Christian. (The secular French Republic was not, officially, but a great many of its officials were). That contributed mightily to a sense of Muslim weakness, oppression and vulnerability.

We often forget how much of the story of European imperialism was in fact directed specifically against the world of Islam. Although India for instance had a great variety of faiths, much of the political and military situation that the British first encountered was dominated by Islamic rulers. The deadliest enemy of the British imperial expansion were Muslim dynasts like Tipu Sultan and Hyder Ali. Around the world, much of the heroic military lore developed by European states was achieved at the expense of defeated and conquered Muslim forces. If you were a Muslim, you could easily be forgiven for seeing the great age of Western imperialism as the largest, and by far the most successful, of the Crusades.

Even worse, from a Muslim point of view, everyone knew that the remaining Islamic powers were firmly in the sights of multiple competing European empires, and the years after 1908 witnessed multiple aggressions. In 1911, Italy established its own empire in Libya, and France formally established a protectorate over Morocco in 1912. Between 1908 and 1914, also, Christian powers grabbed most of the remaining Ottoman-ruled lands in south-eastern Europe. Most important of all, it was in these very years that the British government made the critical decision to shift from coal to oil as the main fuel for its navy, and other Powers followed shortly. That made it essential to control the areas of known petroleum reserves, in Persia, Arabia and Mesopotamia.

Only a near-miracle allowed the heart of the Ottoman Empire to survive the First World War in the form of an independent Turkey. And that was only achieved by slaughtering most of the Christian minority population that would give outside powers a justification to invade and annex.

At the time of Zwemer’s map, then, few reasonable observers would have imagined that any independent Muslim states would exist in twenty years. That all goes far to explaining the rise of nationalism and political Islam over the coming decades – all the more urgently after the termination of the Caliphate in 1924.

Also remember that in this era, at least some powers assumed that occupying a Muslim majority land would be followed by the introduction of white Christian settlers, who would gradually displace older populations, and often to reduce them to servile status. That is what occurred in French Algeria, and several powers (including Greece and Italy) had similar ambitions in what later became Turkey.

That was quite apart from the role of Christian missionaries, people like Zwemer himself. Although the empires differed in their openness to missionary expansion, most allowed some kind of activity, and offered military protection. However much you hated or resented those missionary ventures, your options in resisting them were strictly limited. Zwemer ended his book with a near-messianic tone:

Be aware that the “God wills it” is a direct reference to the Deus vult, which was the war cry of the medieval Crusades.

If you were a Muslim looking at the world in 1908, you had every right to be deeply pessimistic about the survival of your religion and your society as anything but a fringe curiosity. To use a term that would not actually be coined for some decades, it was quite reasonable to imagine that Islam was facing a kind of cultural genocide. If you weren’t thinking in apocalyptic terms, you weren’t reading the newspapers.

Those statistics help explain many specific actions in later years, especially the nervousness about Allied powers to do anything that could provoke Muslim subjects. That added hugely to the concerns of those empires (for instance) in navigating questions about Jewish settlement in Palestine. From a different perspective, this helps us understand the desperate concern among Indian Muslims at a tine of surging nationalism in those territories. Those Muslims faced the prospect of replacing a British Christian raj with living under a Hindu majority state: hence the creation of Pakistan.

Unless we understand the catastrophic situation of “the Moslem [sic] World” around 1910, we will never comprehend the rise of Islamic politics, and militancy, later in the century.

Most fundamentally, look at the raw numbers in Zwemer’s map, and the Muslim share of world population. The map describes a world with 220 million Muslims, half of whom lived in the Indian continent and South-East Asia. In all, Muslims represented 12 percent of the global total.

Now compare the modern picture. Although exact numbers are contested, a reasonable estimate suggests a world Muslim population somewhere between 1.5 and 1.8 billion, perhaps eight times what it was in 1908. That would make up between 21 and 25 percent of the global total. Both in absolute and relative terms, that is massive growth in a short historical period. In 1908, the Dutch East Indies probably had a Muslim population of some thirty million, compared to 225 million in today’s Indonesia. In 1908, the whole Indian subcontinent (excluding Afghanistan) had some 63 million Muslims. Including the present day nations of Pakistan, Bangladesh, and India, the comparable figure today would be 520 million. The population of heavily Muslim Iran has grown nine-fold, from nine million in 1908 to 81 million today. Growth in Africa has been still more spectacular: today, that continent has a half billion Muslims.

Those statistics are all striking enough, but the cumulative changes are still larger if we compare those soaring Muslim numbers with the relatively stagnant figures for white Europeans. While Africa’s total population has grown tenfold since 1908, Europe’s population in the same period has grown by a factor of 2.5 – and of course, tens of millions of those new Europeans are migrants, many of whom are Muslim. Had it not been for Christian growth in the Global South, Muslim numbers would today be utterly swamping Christianity.

That demographic division between Global North and South – above all, the stark contrast in fertility rates – should assuredly be counted among the most important trends in global affairs in modern times.

Thanks to my former Penn State colleague David Atwill for his advice about interpreting those figures for the number of Muslims in China! 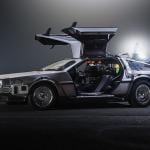 January 22, 2019 A Brief History of the Time Machine
Recent Comments
0 | Leave a Comment
Browse Our Archives
Follow Us!