However strange this may sound, I am ever more struck by the central and continuing role of religious rhetoric in contemporary US politics, and especially from liberals and progressives. But surely, you say, a modern political leader might use conventional religious language, especially at times of catastrophe – sending thoughts and prayers – but when does modern day political debate explicitly draw on complex or demanding  theology?

Well, it may not sound religious, in the sense of invoking Christ or Allah, but in the case of one very live current issue, then religious and theological it assuredly is. As an example, look at the language currently being used about racism and the legacy of slavery, which has repeatedly been called “America’s Original Sin.” See for instance Jim Wallis’s book America’s Original Sin: Racism, White Privilege, and the Bridge to a New America (2015) or Annette Gordon-Reed, “America’s Original Sin: Slavery and the Legacy of White Supremacy,” in Foreign Affairs (2018). So is that a religious assertion? Why no, we retort, it is a metaphor. The fact of slavery was an ancient fact that distorted the proper development of the society, and it has left a potent and pervasive inheritance that affects people today. Just a metaphor!

Or is it? Think of the argument: this was a long ago catastrophe that has irretrievably blighted later generations – perhaps all later generations – unless and until they rid themselves of that curse. And how do they do that? As long as you are under the command of that original sin of slavery and its heritage, you can’t break free of the burden of racism. The only solution is to acknowledge and confess that fact, that you and your whole society are part of that structure of sin, and then you redirect your life into a new course. Only then can you begin the process of repentance and rebuilding. Without that fundamental recognition, all later acts are vain gestures.

Is this not the language of evangelical conversion? Change a few words and we almost have the classic texts: all have sinned and fallen short…. There is none that is righteous, no, not one …. If a man says he has no racism in him, he is a liar….

And when you do see the comprehensive and pervasive nature of the flaw running through society and consciousness, you are – what? Woke. Awake, oh sleeper…

Presenting this argument does not challenge the idea that racism exists and is a powerful and thoroughly damaging force. But whenever I encounter those arguments, I always have to ask a basic question of definition. What does the writer or speaker mean by racism? My own definition goes something like this. Racism means attitudes, thoughts, speech, or other behaviors that are hostile or demeaning towards other racial or ethnic groups. By that standard, I can point to plenty of contemporary examples, and I can think of institutions or structures where racism is deeply embedded, and which is reflected in profoundly discriminatory acts and outcomes. In that vision also, racism can be committed by any group towards any other group, and you’d be amazed what a controversial or provocative statement that is today.

But surely, the definition – things you say, do, or think – is different from the vision of the whole world as being under the grip of racism, that society as such is irredeemably and systematically racist – that the world is still in the hands of that original sin. The implications are vital.

So if I believe that racism is something that people can combat without that fundamental turn around of life, that metanoia, what does that make me, in terms of the larger religious vision? Am I a Pelagian?

Next time you do read denunciations of systematic racism in society – or the churches – do listen closely. You might be surprised how few words have to be changed to be in the world of camp meetings and revivals.

The obvious question: when people use an “evangelical” model, are they harking back – however unconsciously, however subliminally – to deep layers in American culture? 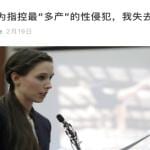 March 25, 2019 Did the Bible Predict Our President?
Recent Comments
2 Comments | Leave a Comment
Browse Our Archives
get the latest from
Anxious Bench
Sign up for our newsletter
POPULAR AT PATHEOS Evangelical
1