Mark’s Ending and the Resurrection

Patheos Explore the world's faith through different perspectives on religion and spirituality! Patheos has the views of the prevalent religions and spiritualities of the world.
The final chapter of John’s gospel reports the risen Christ meeting his disciples at the Sea of Galilee. I suggested that this might in fact have been the oldest version of the Resurrection story, predating the more famous encounter of Jesus and Mary Magdalene in the Jerusalem garden. Some scholars have also raised the possibility that this scene, or something like it, might originally have been the culmination of another of the canonical gospels.

The Gospel of Mark, at least as we have it, ends on a bizarre note. All ancient manuscripts end with a story that currently comprises Mark 16.1-8. After the crucifixion, the women go to the tomb to anoint Jesus’s body. They find the stone rolled away, as a young man in a white robe proclaims the Resurrection:

“But go, tell his disciples and Peter, ‘He is going ahead of you into Galilee. There you will see him, just as he told you.” Trembling and bewildered, the women went out and fled from the tomb. They said nothing to anyone, because they were afraid.

And that’s the end. The women are filled with tromos kai ekstasis (terror and amazement) and there is no Resurrection appearance. Do note the stark double affirmation of “and they said nothing to anyone,” kai oudei ouden eipan, literally “to no-one nothing they told.” This prevents us assuming that another later scene might have the women encountering the risen Jesus. Seemingly, that also means they disobeyed the instruction to tell the disciples about the Galilee appearance. Contrary to what we assume from reading the other three gospels, the (male) apostles had no inkling of these epochal events, any hint that the tomb was empty. The Resurrection, when they realized it, would be a total and astonishing surprise to Peter and his companions.

Let me repeat that: this is not a Resurrection appearance, however often it might be cited as one in sermons.

Incidentally, the final Greek sentence ends with the word gar, technically an enclitic. In ancient Greek, it was very bad form to end a story on an enclitic, and no book ever ended thus. To use a modern English parallel, it was almost like ending in mid-sentence.

It’s obvious to assume that Mark, a skilled and thoughtful writer, did not mean to end the book thus, and that an original ending has been lost. But that is where the story gets puzzling. If we assume the standard theory of the composition of the gospels, then Mark wrote about 70. Perhaps a quarter century afterwards, his book was used by both Matthew and Luke, who incorporated virtually his whole text, and it is clear that neither author knew any other or fuller ending. If an ending was lost, it vanished very early indeed, if it was ever written. At least by the second century, various editors added their own conclusions to satisfy what they felt to be the gaping hole at the end of Mark, and one survives in the KJV as Mark 16.9-20.

Today, a large number of fine scholars believe that the apparent ending of Mark at 16:8 represents the author’s original intended conclusion. Mark, in this view, deliberately intended to end on a note that demanded a leap of faith, that offered no easy answers: he was superbly post-modernist! I do not accept this for multiple reasons, partly linguistic and stylistic. Above all, I simply do not credit that Mark meant to leave the reader with such a pessimistic text. As it stands, the reader is left with the words “ephobounta gar” – roughly, “they were afraid, okay?” We would also be left with a desperately hostile and hopeless picture of Peter, whom early tradition links closely to Mark himself.

If it really was meant to end at 16:8, Mark may be the greatest anti-Christian, anti-Jesus movement, tract ever written. It could scarcely have been so highly regarded as it was, still less accepted as the basis of other traditions.The obvious suggestion is that the gospel as it stands was meant to be followed by some kind of resurrection appearance specifically involving Peter and, based on the text, one that occurred in Galilee rather than Jerusalem. Incidentally, that final component need not have taken written form: it might have been a verbal presentation.

One early text supplies exactly what we would expect at that point. The second century Gospel of Peter was popular in the early church, although it later dropped out of use, and today it survives only in incomplete form. (It was rediscovered only in the 1880s). Not a wholly independent work, it mainly relies on the canonical gospels, but also draws on the Jewish-Christian gospel tradition. Its ending demands attention, as its tomb scene is precisely Mark’s, with the women at the tomb receiving news of the Resurrection, then fleeing in fear. They do not see Jesus directly. “Peter” then reports that

Then the women fled frightened. Now it was the final day of the Unleavened Bread; and many went out returning to their home since the feast was over. But we twelve disciples of the Lord were weeping and sorrowful; and each one, sorrowful because of what had come to pass, departed to his home. But I, Simon Peter, and my brother Andrew, having taken our nets, went off to the sea. And there was with us Levi of Alphaeus whom the Lord … (Raymond Brown’s translation)

It’s very likely indeed that the next scene would have been something very much like John 21, with a Resurrection appearance (a) to Peter (b) in Galilee. If the ending of Mark’s gospel actually did exist and then was lost, this is presumably just what it would have looked like. Rudolf Bultmann was one famous scholar who argued this.

Purely as an intellectual exercise, it is interesting to put together the common elements in John 21 and the other stories that seem to be echoes of it – the walking on water scene, especially as it appears in Matthew; and the miraculous draught of fishes. What they have in common, possibly as vestiges of an original story, would include a dawn or early morning setting, following a long and likely unsuccessful night’s fishing; a vision of Jesus, whether on the water or the shore; the central reaction and acknowledgment by Peter; and Jesus’s words “Don’t be afraid,” whether addressed to one person or several.

The problem then, of course, is just how that ending was lost. Was it perhaps lost from one manuscript, but survived in another copy used by “Peter”? Did that ending survive only in note form, or oral memory, after Mark’s sudden death?

I don’t have any great resolution for these questions. But the more I look at the scene by the Sea of Galilee, the more significant I think it was for the earliest church.

I originally posted this some years ago 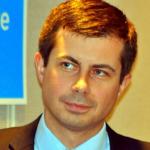 April 18, 2019
Pete Buttigieg and The Politics of American Greatness
Next Post 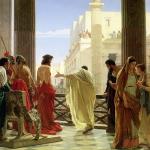 April 20, 2019 Pilate's Holy Saturday
Recent Comments
10 Comments | Leave a Comment
"I don't see how this relates in any way to what I posted."
NorrinRadd Will This Week Bring an Epiphany ..."
"If you believe that Torah or O.T. bible is accurate, please read Numbers 5:11-31 and ..."
Enlightened Will This Week Bring an Epiphany ..."
"Sounds like the Okie version of "Mr. Weston's Good Wine". I wish more people knew ..."
Charming Billy Why Pop. 1280 is an American ..."
"That's correct in itself, but hardly applies to the Dutch denomination Kuyper was part and ..."
MNb Josh Hawley, Betsy DeVos, and Abraham ..."
Browse Our Archives
get the latest from
Anxious Bench
Sign up for our newsletter
POPULAR AT PATHEOS Evangelical
1