When Baptists Were Radical

The whole company of believers stuck together and held all things in common. They were selling their goods and belongings, and dividing them among the group on the basis of one’s need. Knit together with singleness of purpose they gathered at the church every day, and as they ate the common meal from house to house they had a joyful and humble spirit, praising God and showing overflowing kindness toward everybody. And day by day, as people were being rescued, the Lord would add them to the fellowship. (Clarence Jordan’s “cotton patch” translation of Acts 2:44-47) 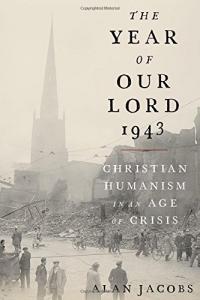 In tandem with teaching a course on World War II this semester, I’ve been reading Alan Jacobs’ The Year of Our Lord 1943: Christian Humanism in an Age of Crisis. A colleague of Philip’s and Beth’s at Baylor University, Jacobs has helped me better understand the wartime work of W.H. Auden, Simone Weil, and Jacques Maritain, and what they had in common with more familiar (to me) figures like C.S. Lewis and T.S. Eliot. But now that I’ve come to the end of Jacobs’ book, I actually find myself thinking far less about his literary protagonists — whose “uncanny clarity… and incisive intelligence” led to “prescriptions [that] were never implemented” — than about someone whom Jacobs mentions only in passing: Clarence Jordan, the Baptist preacher, writer, and activist who co-founded Koinonia Farm, an intentional, interracial Christian community in Sumter County, Georgia.

I don’t mean to denigrate the intellectual efforts of Jacobs’ Christian humanists. In fact, Jordan was an academic himself. After initially training as an agronomist (training that would come in handy at Koinonia), he completed a doctorate in Greek at Southern Baptist Theological Seminary. According to Baptist ethicist Henlee Barnette, Jordan liked to joke that “he had learned a lot of New Testament Greek in spite of his teachers. He discovered in the Greek New Testament a scriptural basis for his moral passion and social action.”

So while Jordan would put his advanced training to use in translating the New Testament into the Southern vernacular of the Cotton Patch Gospel (in which Jesus came from Valdosta, Georgia and the Crucifixion was a “lynching”), koiononia could never be simply a Greek term for him. Even as a seminary student, Jordan sought to build a 20th century version of the church of Acts. After marrying in 1936, he and his wife Florence formed an experimental community in Louisville, joining with other students interested in pacifism, racial justice, and communal living.

But the Jordans’ most enduring koinonia started to take shape in 1941, when Clarence began to talk with Martin England, a Northern Baptist missionary forced by war to leave Burma. Hoping to fuse their passions for racial equality, rural reform, communal living, and home mission, Jordan and England purchased a 440-acre plot of red clay soil near Americus, Georgia and founded Koinonia Farm in November 1942. 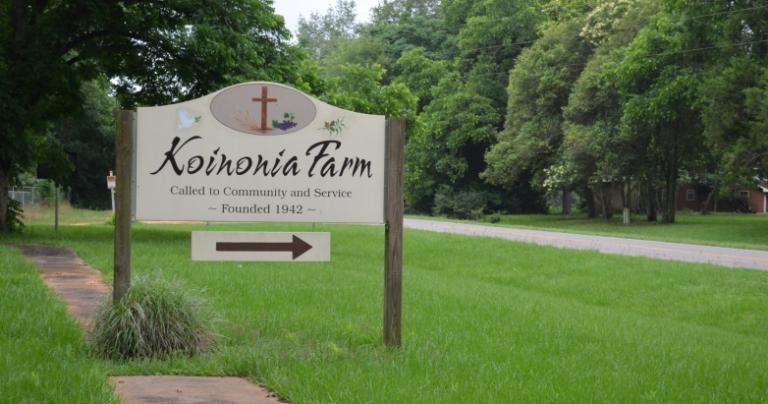 The community soon drew interest from students at universities like Auburn and Furman, young white Southerners who had already begun to question Jim Crow. They wanted, in the words of Koinonia Farm historian Tracy Elaine K’Meyer, to respond “by living a Christian life and doing something about the race problem of their region.” The Jordans, Englands, and other Koinonians reached out to their rural neighbors — twice as many black as white — with offers of economic and spiritual assistance: everything from a seed cooperative to Vacation Bible School. K’Meyer reports that most African American participants “consciously remained separate” — in part because they preferred to work for wages than to “accept voluntary poverty” as part of Koinonia’s unique economy — but some did join the community. 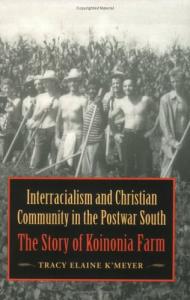 Simply by sharing meals, paying equal wages, and expanding educational opportunities, the Koinonians “laid the groundwork for change in Sumter County.” Opening a 2012 symposium on what would have been Jordan’s 100th birthday, former president Jimmy Carter (whose hometown of Plains is not far from Americus, where Habitat for Humanity grew out of Koinonia) highlighted one legacy of Jordan’s community: “No longer are churches the last holdouts in bringing about the integration and equality of the races.”

But Jordan and the other Koinonians had a complicated relationship with more established churches. While K’Meyer notes that early Koinonia outreach like VBS was initially acceptable to area whites “because it was pursued through traditional southern Protestant practices,” tensions mounted in the late 1940s as the Koinonians sought to integrate not just their small community, but local churches. In 1950 they were expelled from Rehoboth Baptist Church, where Clarence had occasionally preached and Florence regularly taught Sunday School. “May there be a ready willingness for reconciliation,” Clarence responded, “which would involve no sacrifice of conscience or compromise of our Lord’s truth.”

(In Jordan’s “cotton patch” translation of Acts 5:17-42, the Sanhedrin becomes the “Conservative Party” leaders of the town, who join “all the prominent white citizens” in tormenting the apostles. Gamaliel — the man who advises them to leave the Jesus-followers alone, in case they truly do represent God — is no longer a Pharisee, but a Baptist Sunday School teacher.)

Jordan lamented that Southern Baptist churches had become “enclaves of racism… concerned with petty programs of self-enhancement.” But as I’ve re-read his story, I’m struck that the roots and fruit of Koinonia Farm are inseparable from Southern Baptist life and institutions. K’Meyer emphasizes that Jordan and his colleagues “organized Koinonia like a Southern Baptist personal service mission” and sought “to use common Baptist forms” to advance racial cooperation. Even as they protested Southern Baptist complicity in racial and economic injustice, Koinonian rhetoric and actions reflected core Baptist ideals: that the Bible is the sole authority for a church in which “all believers are equal and are priests to each other”; that “Christians should live in communion with other believers” while still “being ‘of the world’ [in order to] to save it.” Much as Jordan made light of his education at Southern Baptist Seminary, K’Meyer emphasizes the influence of professors like Edward A. McDowell, Jr., “who inspired [Jordan] to look more deeply into the Greek New Testament for the meaning of the Word,” which McDowell believed “must come alive in currents of history and social change.” 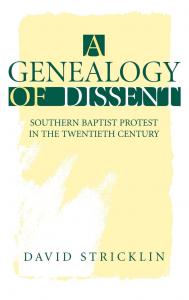 David Stricklin identifies Jordan as part of a “genealogy of dissent” among early-to-mid-20th century Southern Baptists who did not regard the former Confederacy as a “Baptist Zion” but sought to offer a prophetic critique of Jim Crow. That “genealogy” goes back to a North Carolina pastor named Walter Nathan Johnson, who hoped to see “the South brought under the leadership of Jesus.” His network of supporters advocated for civil rights, organized labor, women’s ordination, and the abolition of the death penalty.

Stricklin then sees Jordan as a link between Johnson and the later ethicist Foy Valentine, who served as the liberal conscience of the Southern Baptist Convention as the longtime director of what’s now the Ethics & Religious Liberty Commission. After graduating from Baylor in 1944, Valentine spent the summer working at Koinonia Farm, where he found in Jordan “a kindred spirit, a preacher deeply committed to scripture,  and a Christian tenaciously committed to its radical teaching” (So says Larry McSwain in his collection about Twentieth-century Shapers of Baptist Ethics. For the rest of his life, McSwain adds, Valentine carried a blank check that Jordan signed and gave him on his departure from Koinonia.)

I’m not a Baptist myself, but I teach at a (Swedish) Baptist university and have been influenced by Stricklin’s “genealogy.” My late mentor, G.W. Carlson, often told me of his life-changing encounter with Clarence Jordan, who spoke at Bethel College near the end of GW’s sophomore year, in 1963. “He represented a third option in the civil rights movement,” GW recalled. “Beyond securing rights within the legal system and using nonviolent protests as a tool for demanding change, Clarence Jordan advocated that the Christian church model a community that would look like the kingdom of God.” 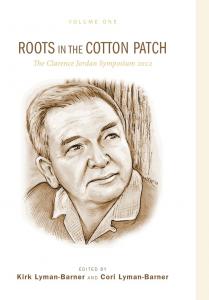 At the 2012 symposium opened by President Carter, GW’s talk defined Jordan — with Walter Rauschenbusch and Martin Luther King, Jr. — as a “radical Baptist.” For GW, that Baptist heritage had nothing to do with white supremacy, or culture wars over an ostensibly Christian nation. Instead, it started with “early identification with people in need or people who are unacceptable to mainstream societal norms” and “a serious discontent with the witness of the established Christian church and a desire to recover a more authentic faith.” Ultimately, it led such Radical Baptists “to follow in the footsteps of Christ and faithfully to live out the principles of the Sermon on the Mount” — in which, Clarence Jordan once wrote, Jesus preached of a kingdom whose doors “are open to all people without respect to race, class, caste, color, nationality, education, or wealth. The children of God are under divine compulsion to accept as a sister or brother anyone who repents and believes. Inside the kingdom there are no partitions. The ones who would erect them thereby declare themselves to be on the outside.” 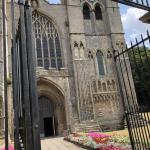 April 3, 2019 The Comfort of Historical Prayer
Recent Comments
0 | Leave a Comment
"Clearly you do not understand Trump's allegations of fraud. He is not suggesting that anyone ..."
Ray The Disenfranchisement of the American People
"In Reconstruction, schools were built and teachers were recruited to come South to teach black ..."
Victoria Schwartz The South’s Poor Whites Are Still ..."
"I dont think I'm a demon. Maybe you should buy thebook and see."
Roger McKinney Christmas Shopping for Christian History Buffs
""narcissism" is a clinical psychological diagnosis, but is popularly used to mean "ego-centric" or even ..."
Michel The Disenfranchisement of the American People
Browse Our Archives
get the latest from
Anxious Bench
Sign up for our newsletter
POPULAR AT PATHEOS Evangelical
1