Nicodemus and the Secret Scriptures

I recently wrote about Nicodemism, the Reformation and Early Modern practice of keeping one’s real religious views secret in an age of potential persecution and violence. As I will explain, that Nicodemite idea was linked to the theme of lost and rediscovered scriptures, real or bogus, which was a major theme of the time. The veracity of documents was a paramount concern in the Renaissance era, and even more so in the Reformation, when scripture supposedly marked the path to salvation. Issues of forgery, authenticity, certainty, and documentary truth suddenly assumed a cosmic significance. I may be wrong, but I don’t think the instance I am discussing has been noted particularly in the sizable and growing literature on Nicodemism.

I have been working on the Gospel of Barnabas, a strange text that purports to be the authentic gospel of Jesus. (You can read the whole immense thing here). Barnabas may contain a really primitive document (or documents) at its core, but as we have it has been multiply rewritten and edited, mainly in the later sixteenth century (roughly). Probably at that point – 1590 or so? – it was appropriated by Muslim or crypto-Muslim writers, to have Jesus proclaim the future coming of Muhammad. As such, it is today an immensely popular and influential text worldwide, as Muslims deploy it so widely in polemic and proselytizing directed against Christians. Globally, for that reason, it is probably the most widely circulated and known of all the alternative gospels.

Although this is much debated, the author might well have been a Spanish Morisco, a forced convert to Christianity who retained his true views secretly. At very much this same time, Moriscos were implicated in other blatant forgeries of pseudo-gospels such as the Lead Plates of Sacromonte. Alternatively, a Venetian origin is possible for Barnabas. It’s a long story, which I am writing about at some length elsewhere.

For my present purposes, I’ll concentrate here on one of the main characters in Barnabas, who is none other than Nicodemus himself, here presented as a Temple scribe. Nicodemus first appears when Jesus commands him to recount a wild story about the Hebrew prophets, which Nicodemus does reluctantly on the grounds that “many believe it not, although it is written by Daniel the Prophet.” In other words, he knows the text is dubious or spurious, but Jesus authenticates it by means of a miracle.

Later, Jesus tells Nicodemus about the real nature of the original Hebrew scriptures, which foretell Muhammad, and warns that the scriptures commonly available were actually forged, contaminated, or doctored to conceal that great truth. The culprits are the “false Pharisees.” Nicodemus admits that he has seen what must have been a copy of an original and true Book of Moses, “written by the hand of Moses and Joshua,” and located in the library of the High Priest. In this pristine version, Moses tells how “God showed him his Messenger in the arms of Ishmael, and Ishmael in the arms of Abraham. Near to Ishmael stood Isaac, in whose arms was a child, who with his finger pointed to the Messenger of God, saying: ‘This is he for whom God has created all things’.”

The Nicodemus of Barnabas is a wholly sympathetic character. He understands concealed truth. He also appreciates when a document is likely to be forged or misleading, so that he can discern truthful and bogus writings. But his honesty can only take him so far, and he needs the miraculous aid of Jesus to allow him to make the final leap to accepting the truth of the texts. As the story progresses, he becomes Jesus’s follower, and his host. In his openness to divine truth and his willingness to penetrate the veil of literary deception, he is a model true Pharisee.

And of course, he is not just a Nicodemite, but Nicodemus himself, and as such he is a night disciple, who knows Jesus secretly, but cannot confess his true views in the light of day, for fear of persecution or death. Yet the truth he accepts and asserts is also Islamic, making him in fact a crypto-Muslim.

Reading this account, we must always recall that these words are all present in a book that is itself bogus or deceptive. Even if the author was presenting the words that he felt most sincerely that Jesus would have said, he knew that he was not presenting an authentic history, or reproducing the actual words of Barnabas as he claimed. A forger is thus assuring his readers that even the most ostensibly authoritative texts have been contaminated. Perhaps he saw himself as Nicodemus, reading out a story that he knew or suspected to be false, but acting under a divine command.

Fundamental to the vision of Barnabas is the idea of the untrustworthiness of texts and of particularly scriptures, not because they have been inaccurately delivered to humanity – an intolerable thought – but because they have been subsequently falsified. In the context of the larger Reformation era, that is a powerful idea, and by no means just for Muslims.

Look at the era from roughly 1540 through 1640. So much of the Reformation endeavor involved determining the authentic and primitive nature of texts, and stripping away later accretions, including many passages long regarded as an integral part of Holy Writ. For Catholics and Protestants alike, that also meant the mass displacement of apocryphal gospels, saints’ lives, and other writings that had been beloved and venerated for centuries. It especially meant collections like the Golden Legend, which in the first years of printing was by far the most popular book in Europe, but which was now largely rejected and condemned. But where might that project stop? And when multiple Bible translations competed for the attention of the faithful, how did a reader decide which was reliable and Godly? In the Holy Bible itself, where could readers find a solid foundation?

In an age when so many ancient writings were coming to attention – when for instance European travelers were finding the alternative Jewish and Christian scriptures that circulated among Indian or Ethiopian churches – who knew where authenticity or certainty lay? At the same time, this was a golden age of forgery, in the realms of history and literature, and the invention of pseudo-antiquity, but also specifically in religious texts. Much as in the nineteenth or early twentieth centuries, believers awaited reports of new textual discoveries with both expectation and alarm.

Meanwhile, there were plenty of explosive secret books in circulation for those who knew where to look for them. Elite bookish networks across Europe passed around clandestine texts that put forward truly subversive and dangerous ideas, including anti-Trinitarian ideas, Unitarian, Socinian, and Deist approaches, works that – if discovered – genuinely could get the owner killed. As late as 1612, even England burnt a heretic at the stake for denying core Christian beliefs. Looking at such underground writings, it is not far-fetched to compare the existence of the hardest of hardcore pornography on the modern day Dark Web. So might some of those alternative religious texts be worth as much as the canonical Bible, or even more? Again, how was anyone to know for certain?

Through the seventeenth century, Barnabas itself circulated as a prized item in those clandestine circles, until it finally saw the light of day in 1709. When John Toland used Barnabas as the basis for his work Nazarenus in 1718, he began a revolutionary new era in the scholarly study of the New Testament, a new epoch in which we are still living. Apart from anything, that book invented the term “Jewish-Christian,” and it was the first scholarly work to propose an alternative gospel as being equal or superior in value to the canonical Big Four. It’s bizarre that so few of us picked up on that vital tercentennial in 2018.

Back in the Early Modern era, how was anyone to know the truth about scriptures of any kind? Lacking a personal visitation fro Jesus himself, what was a wise person to do? This made an excellent case for pretending conformity with what the official churches wanted to teach and preach, while really retaining an open mind about their final truth, assuming that such truth could be find anywhere in this sinful world – in other words, for Nicodemism.

Imagine a learned man in seventeenth century England listening to a cleric expounding the doctrine of the Trinity from the pulpit, and in the process relying on the Johannine Comma (1 John 5.7) as the clincher argument. If not exactly a forgery, the Comma is a clumsy blunder. Erasmus knew very well that the passage was a late addition to the New Testament text, and he had decided to omit it from his own critical version. But the pressure to include it was overwhelming, to the point of a contemporary forging a supposedly ancient Greek MS, and Erasmus grudgingly conceded. That meant that the Comma ended up in the King James translation. As Gibbon would later remark of the passage, “Even the Scriptures themselves were profaned by their rash and sacrilegious hands.” Our imaginary listener knows the verse has no right being in scripture, yet he does not stand up and protest, and destroy his career. Rather, he listens quietly, rolls his eyes, and pretends outward conformity: he is a classic Nicodemite. 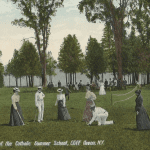 July 25, 2019
Summer Camp: American Religion and Recreation in the Great Outdoors
Next Post