The Patron Saint of Bachelorettes 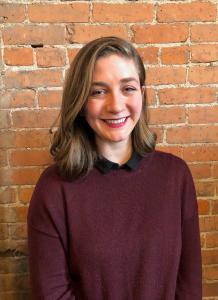 I am so happy to have a post today from one of my favorite graduate students. Taylor Sims is a PhD candidate in History at the University of Michigan, specializing in late medieval and early modern European and women’s history. She holds an MA in History from Baylor University and is writing a dissertation on gender and lay practice across the English Reformation.

Last week, I was mindlessly scrolling through Instagram when a targeted ad caught my attention. Usually, I just scroll right past posts marked “sponsored” or “promoted,” but this one stuck with me. The short clip opens with an image of a woman in a dimly lit art gallery staring up at a painting of Saint Catherine of Alexandria, with a voice-over subtitled in bright red letters. The image stopped my scrolling before I realized that the ad was for a new episode of The Bachelorette. 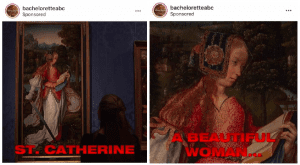 The 40 second clip shows Bachelorette-Hannah essentially doing a visual analysis of the painting, connecting her own experiences looking for love to the saint’s iconography. The camera focuses on each element of the image as Hannah’s voice-over continues: “St Catherine…a beautiful woman…has a sword in one hand and Bible in the other. There’s, like, all this beauty around her, but also fights & men all chasing behind her…I feel, like, that’s me right now. I’m trying to be strong. He deserves to be loved fiercely, just as much as I do. I don’t know what to do, and I’m scared. I just feel bad.”

To add some quick context to the Instagram clip, this episode unfolds in the Netherlands; and before a one-on-one dinner where she sends a suitor home—hence the “I just feel bad” from the voice-over—Hannah takes private stroll through the Mauritshuis Gallery in The Hague. The camera follows her as she views the collection’s most famous paintings, Vermeer’s Girl with a Pearl Earring and The Anatomy Lesson of Dr. Nicolaes Tulp by Rembrandt. Finally, she stops in front of the painting of Saint Catherine of Alexandria, created c. 1515-1520 by the Master of Frankfurt.

I don’t even watch The Bachelorette, and I haven’t for a while. I only know a little bit about this season’s protagonist from a earlier headlines about sex and “Christian-shaming” (see Eonline and Vulture for examples; another discussion for another time). But I was struck by her connection to the saint; and as a women’s historian and medievalist, I love the idea that 5.66 million viewers got a glimpse of Saint Catherine. In fact, there was a noticeable spike in worldwide google-searches for “Saint Catherine” during and after the episode aired.

Saint Catherine of Alexandria was among most celebrated saints of medieval Christianity, and her vita or “legend” positions her as a virgin martyr with both beauty and brains. Bachelorette-Hannah isn’t the only woman to see herself as Saint Catherine—Check out Artemesia Gentileschi’s self-portrait. We can identify the saint by her 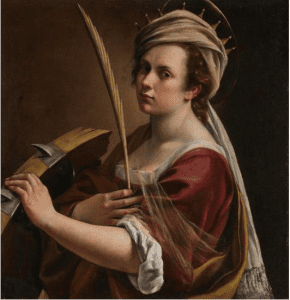 iconography or attributes: a wheel (her intended means of torture), a crown (her royal lineage), a book (her learning and oratory skill), a sword (the instrument of her death), and oftentimes a palm frond in lieu of a sword (a more general symbol of martyrdom).

Her legend situates her in the fourth century and describes her as a woman of royal descent who converted to Christianity, refused marriage even to the emperor, and even defeated fifty philosophers in what I picture as lightening-round debate. Her full tale is included in The Golden Legend, a thirteenth-century anthology of saints’ lives and one of the most popular texts of the middle ages. In the legend, Catherine is eventually imprisoned and sentenced to death by breaking wheel, but the device shatters at her divine request. Frustrated by her persistence and resistance, the emperor orders her beheading, and she becomes the now-famous martyr.

The vita begins when eighteen-year old Catherine confronts Emperor Maxentius after hearing the noise of sacrifice. She rebukes all present for worshiping temporal and transient things that “will be like dust blown before the face of the wind.” The story details how she “went on to discourse at length and with wisdom.” She succeeds in shocking the emperor, but he dismisses her and tries to go about his business. “The emperor was so amazed that he could make no reply to her, but recovered himself and said: ‘Please, O woman, please let us finish our sacrifice, and afterwards we will come back to this discussion.” This cycle continues. She bests him again and again, even after he gathers fifty of the sharpest minds to refute her. He sends for them, explaining, “We have a girl here who has no equal in understanding and prudence. She refutes all our wise men and declares that all our gods are demons. If you can get the better of her, you will go home rich and famous!” Guess what, she out-debates them one by one. The legend says, “The virgin went on to contradict the orators with the utmost skill and refuted them with clear and cogent reasoning, to the point that they, dumbstruck, found nothing to respond and were reduced to silence.” Even in prison, the legend says, “Catherine began at once to preach…”; and as a result, Maxentius’s own wife and queen is converted. When he cannot silence Catherine, he tries to win her over with a proposal—the position opened up when he killed his own wife following her conversion. In response to his offer of security, power, and prestige, she says, “Now you yourself pay attention, I pray you, and, after judicious consideration of my question, give an honest decision: whom should I choose— one who is powerful, eternal, glorious, and honored, or one who is weak, mortal, ignoble, and ugly?” Then he offers an ultimatum, marry him and deny her Christianity, or die. Again, she responds, “Do anything you have a mind to do! You will find me prepared to bear whatever it is!” And you thought The Bachelorette was high drama…

Catherine out-maneuvers manipulative men and she confronts those drunk with power with an unrivaled persistence. She argues clearly above the noise, and her voice pierces the din, so much so that she leaves the emperor “utterly speechless” (as Christine de Pizan puts it in her early 15th-century The Book of the City of Ladies; see Beth’s earlier post for more on de Pizan and her work). In contrast with her well-chosen words, the emperor’s boasts and entreaties are just the rants of a small man. After the debates, each philosopher is left “dumbstruck…and reduced to silence.” When women’s voices are so hotly disputed and consistently questioned, Saint Catherine’s persistence and refusal to be silenced present as a welcomed example. Even if she is met with the all-too familiar response: “Please, O woman, please…” Even when dismissed, she refuses to be defined by the men around her, debating them, refusing them, and even converting them.

Remember how she resists the emperor’s proposal, asking him, “whom should I choose— one who is powerful, eternal, glorious, and honored, or one who is weak, mortal, ignoble, and ugly?” She won’t settle for just anyone, and her expectations are so high that Christ is the only eligible bridegroom. In other iterations of her story, Catherine is just as picky about a human match before her conversion, and this led to her late medieval association with women looking for husbands. Yes, she is famously a virgin martyr and the patron saint of philosophers and scholars, but she also became a patron saint of bachelorettes. Lay-tradition at the chapel of Saint Catherine in Abbotsbury (Dorset) reflect this association, as young women in search of husbands would go to the south doorway of the chapel and pray for her intercession with the rhyme:

Or they could pray a different variation, asking for Catherine’s aid in finding a husband, since anyone (arn a one) was better than no one (narn a one).

Sweet St Catherine, send me a husband
A good one I pray
But arn a one better than narn a one,
Oh, St Catherine
Lend me thine aid
And grant that I never may
Die an old maid

Maybe someone in production really did their research, but I think they just got lucky. Her voice-over almost sounds like a wish for intercession—“I don’t know what to do, and I’m scared. I just feel bad.” Maybe she could have said, “Sweet St Catherine, send me a husband. A good one I pray.” The Bachelorette’s connection to Saint Catherine is pretty spot-on, but if we delve in, listen to the legend, and give the image of Saint Catherine a backstory, we see much more. 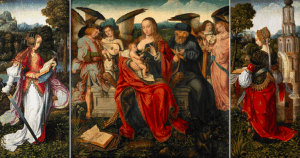 In fact, the very painting that so moves the Bachelorette-Hannah was originally part of a tryptic altarpiece, or a set of three paintings. Saint Catherine of Alexandria did not just stand alone among the beauty, but with other exemplary women. She and Saint Barbara flank the Holy Family with the Virgin Mary in the center (more on that piece here). The patron saint of bachelorettes stands alongside other holy women, defined by her rank among the saints and intercessory role much more than her beauty or her suitors. 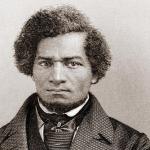 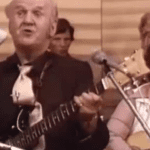 July 11, 2019 The Scandinavian Christian Music Industry and Transatlantic Pentecostalism
Recent Comments
0 | Leave a Comment
"Actually, a couple of things are at work here. England was radically different because Common ..."
philipjenkins Of Revivals, Convulsions, and Witchcraft Panics
"As I understand it, in Spain, ironically, the witchcraft craze scarcely happened at all because ..."
Iain Lovejoy Of Revivals, Convulsions, and Witchcraft Panics
"All fair comments. I was mainly thinking of their relationship to the respective institutional churches. ..."
philipjenkins Of Awakenings, Convulsions, and Writing Christian ..."
"Oh, okay. I do see parallels in the sociological and emotional senses.I was thinking more ..."
Daniel Wilcox Of Awakenings, Convulsions, and Writing Christian ..."
Browse Our Archives
get the latest updates from
Anxious Bench
and the Patheos
Evangelical
Channel
POPULAR AT PATHEOS Evangelical
1