Baptists (and Other Christians) Against Christian Nationalism

Like thousands of other Christians who have already signed this new statement, I’m “concerned about a persistent threat to both our religious communities and our democracy — Christian nationalism.”

I think patriotism can be a meaningful way to live out love of neighbor. I think that Christians in the United States best fulfill the biblical injunction to “honor the emperor” by “honoring the institutions, procedures, offices, and underlying values of our democratic system.” And I think that religious convictions can and should motivate democratic political action — as seen in the “honest patriotism” of prophetic dissenters like Frederick Douglass. But if Christian nationalism is rightly defined as seeking “to merge Christian and American identities, distorting both the Christian faith and America’s constitutional democracy,” then it demands public opposition from all sorts of Christians.

Conservative critics like radio host Janet Mefferd have complained that the Christians Against Christian Nationalism statement doesn’t name recent, specific examples of the abstract problems it attaches to Christian nationalism.

But if any readers are skeptical about the statement, I’d encourage them first to read signer John Fea’s response to such concerns — and then to check out a new series of podcasts on Christian nationalism from the Baptist Joint Committee for Religious Liberty.

In the first episode, BJC director and statement organizer Amanda Tyler alludes to “some troubling signs that Christian nationalism may be stuck at high tide.” While she’s bothered by violent attacks on individuals and houses of worship, she warns that “Christian nationalism also reveals itself in less dramatic ways” — e.g., as bills in state legislatures that would require biblical literacy courses in public schools and post the statement “In God we trust” in such public spaces. The Christians Against Christian Nationalism initiative, she explains, “is not in response to any one of these incidents, but rather as a way to counter what we view and perceive as a growing threat.”

In the remainder of that first episode, listeners hear from five of the initial twenty endorsers of the statement. It struck me that most of them not only talked about current events, but appealed to religious history. In different ways, all drew on their particular Christian movements’ historical experiences as religious minorities who learned that “[c]onflating religious authority with political authority is idolatrous and often leads to oppression of minority and other marginalized groups as well as the spiritual impoverishment of religion.”

For example, Jeffrey Haggray, executive director of the American Baptist Home Mission Societies argued that “the greatest threat posed by the sectarian movement known as Christian nationalism is that it is deeply rooted in white supremacist ideology, and in the history of the Confederacy.” One of the five African American Christians featured on the endorser page, Haggray fleshed out the statement’s claim that Christian nationalism “often overlaps with and provides cover for white supremacy and racial subjugation.” Alluding to attacks on mosques, synagogues, and black churches, among other hate crimes perpetrated by white Christians, Haggray concluded that “Christian nationalism has a stated preference in favor of an America that enjoys white domination.”

(On this point, please consider sociological research finding that “the more strongly you embrace Christian nationalism, the more likely you are to hold negative attitudes toward racial and religious minorities.”)

Other endorsers emphasized the ongoing plight of immigrants, drawing on the memory of their own ancestors’ difficult transitions from the Old World to the New. Quaker lawyer Diane Randall recalled that her spiritual forebears “came to this country to pursue religious freedom, so that they would be able to follow their own understanding of the divine, their own understanding of God, and were persecuted for it.” As we’ve read from John in recent months, 17th century Quakers didn’t necessarily find New England any safer than the old one. But even if that history of violent persecution now seems impossibly distant, its memory still informs Randall’s response to the contemporary dangers of the state privileging Christianity and denigrating other religions:

Interestingly, Lutheran bishop Elizabeth Eaton — the first podcast’s one magisterial Protestant participant — started by emphasizing the founders’ intent not to reproduce the established churches that they had left behind in Europe — including the Lutheran state churches of Germany and Scandinavia. Indeed, she argued that earlier generations of American Lutherans had “basically stayed in our own little ethnic-language groups” in order to avoid being “subsumed into the Deist, I would say, Calvinist civil religion that was so prevalent in our country.” The danger of civil religion — for both state and church — also looms large for Baptists like Haggray, who understood “Christian nationalism as an extreme practice of American civil religion,” one that “elevates patriotism and loyalty to the ideology of ‘America First’ above Christianity.”

It’s telling that Christians Against Christian Nationalism not only started with the Baptist Joint Committee, but that almost half the statement’s original endorsers are Baptist. (And no small share of the thousands of subsequent signers.) “As a Baptist Christian,” Tyler explained early in the podcast, “I’ve been particularly troubled by the way that Christian nationalism distorts Christianity. I see it as a limitation of my faith, trying to put Christianity into a box labeled American patriotism.” Cooperative Baptist leader Paul Baxley warned of the negative impact of a Christian nationalist witness on the global mission efforts so central to Baptist identity, and quoted Catholic theologian Emmanuel Katongle’s warning against letting “the blood of tribalism [run] deeper than the water of baptism.”

I’m not a Baptist, but I work for Baptists — and respect their historic commitment to religious liberty for people of all faiths and to the separation of church and state. As I noted in a 2016 post on this topic, the Baptist denomination that sponsors my employer affirms “that every human being has direct relations with God, and is responsible to God alone in all matters of faith; that each church is independent and must be free from interference by any ecclesiastical or political authority; that the Church and State must be kept separate as having differing functions, each fulfilling its duties free from dictation or patronage of the other.” (Yet again, there’s an immigrant connection here. Converge started in the mid-19th century with pietistic Baptists who fled persecution in officially Lutheran Sweden for the religious freedom of America.) In the 1960s, former Bethel dean C. Emmanuel Carlson pushed to keep the rote civil religion of official prayer out of public schools.“To those who fear that God is somehow being pushed around, locked out, and robbed of his power,” he told a congressional committee, “our people will reply that God does not need our defense, but that we need the humility to serve him.”

Carlson was one of Tyler’s predecessors as director of the Baptist Joint Committee, whose origins go back at least eighty years, to the ratification of an American Baptist Bill of Rights affirming that religious liberty is “not only an inalienable human right, but indispensable to human welfare” and pledging Baptists to work for “the utmost maintenance of absolute religious liberty for his Jewish neighbor, his Catholic neighbor, his Protestant neighbor, and for everybody else.” Baptists, the drafters claimed, stood “for a civil state” and would “condemn every form of compulsion in religion or restraint of the free consideration of the claims of religion.” (For more on the history of the BJC and its understanding of the relationship between religion and politics, see this 2009 interview with then-director J. Brent Walker.)

Originally, Southern Baptists joined their Northern (now American) and National (historically African American) cousins in affirming that bill of rights, then cooperated with other Baptists for decades on the Baptist Joint Committee. More recently, theologian Russell Moore has staunchly defended the religious freedom of Muslims at the annual meeting of the Southern Baptist Convention, protested nativism and white supremacy, and rejected the notion that America is a “Christian nation” specially blessed by God. The country’s founders, he argued in the video below, “did not found the country as a Christian nation, which is why there is, for instance, no religious test for office holders and why there is a separation between the responsibilities of the state [and] the responsibilities of the church or of worshipping communities in the United States. I think that the confusion often comes in when people assign to the United States of America a providential place in history that the Bible never assigns it.”

Yet Moore’s name — and those of other SBC leaders — is conspicuously absent from the BJC-organized statement against Christian nationalism. While state Baptist conventions in Missouri, North Carolina, Texas, and Virginia continue to support the work of the BJC, the Southern Baptist Convention itself split from the BJC during the conservative “resurgence” of the 1980s and 1990s and instead shifted focus to the work of its own Ethics & Religious Liberty Commission (which Moore heads).

I know that there are continuing tensions between the SBC/ERLC and BJC over abortion, same-sex marriage, and other issues. (Though I’d note that the Baptist Joint Committee continues to have the support of evangelical Baptist groups like Converge and the North American Baptists.) But it’s unfortunate that those organizations haven’t made this one of their rare moments of renewed partnership. It would have been a wonderful way for the leaders of the country’s largest Protestant denomination to join their Baptist cousins in reaffirming crucial elements of their shared history — in opposition to the Christian nationalism espoused by prominent Southern Baptist pastors like Trump apologist Robert Jeffress.

But if SBC and other evangelical leaders are reluctant to add their names, I hope that many readers of this blog have no such hesitation. To sign the Christians Against Christian Nationalism statement, click here. 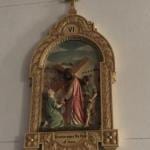