Today I discuss Darren Dochuk’s recently published Anointed with Oil: How Christianity and Crude Made Modern America. Darren is Associate Professor of History at the University of Notre Dame, where we met as graduate students back in the late 1990s.

– Cameron Townsend, the founder of Wycliffe Bible Translators and the Summer Institute of Linguistics, went to Mexico in the 1930s, met President Lázaro Cárdenas, secured permission for evangelical missionaries to operate in the country, and defended Cárdenas’s decision to nationalize U.S. and British oil companies in Mexico. Townsend saw major American oil companies as an unholy cartel.

– In February 1945, William Eddy arranged a meeting between Franklin Roosevelt and  Saudi Arabia’s King Abdulaziz ibn Saud on the Suez Canal’s Great Bitter Lake. The sons of Christian missionaries in Beirut, Eddy held a Ph.D. in English literature but discovered a lifelong passion and appreciation for Arabic and Islam during a faculty stint at the American University in Cairo. “He knew pages and pages of the Qur’an by heart,” Eddy’s daughter recalled. Eddy never converted, but for decades he and other “Arabists” pressed American politicians, diplomats, and oil executives to make common economic, political, and cultural cause with Middle Eastern Muslims. For a time, the results were impressive. The Saudi monarchy permitted Americans to take the lead in developing the kingdom’s oil fields, and he tacitly permitted American workers to hold Christian services.

– Patillo Higgins, the one-armed “Prophet of Spindletop,” spent years predicting and looking for oil strikes in Texas. Converted at an 1885 revival in Beaumont, Higgins attended and taught Sunday School at the city’s First Baptist Church. He spotted signs of oil underneath springs on one church outing. Higgins then endured stretches of mockery but then struck black, liquid gold at a hill named Spindletop just outside of Beaumont. Jesus and oil both saved him.

Anointed with Oil is a book remarkable for its breadth and erudition, the “religious biography of a natural resource with outsize — and seemingly otherworldly — importance.” Darren tells the story of American religion and the American petroleum industry developed in tandem for the last hundred and fifty years. In many ways, it’s a sprawling book in the best sense of the adjective, ranging across the United States and up to Alberta, gazing at Latin American and Africa and closely examining the politics and religion of oil in the Middle East.

The lynchpins of the book are the Rockefeller and Pew families; their generations anchor the narrative years. Other familiar men, such as Billy Graham, take starring turns as well. Darren, however, does not limit himself to well-known politicians and preachers. With great narrative skills, he introduces readers to Higgins, Townsend, and Eddy. The result is a book rich with detail and humanity. A glance at the notes, moreover, shows remarkably long research trail. Darren looked for information about oilmen nearly as hard as the oilmen themselves looked for oil.

Why Christianity and crude together? While one could hardly ignore the religiosity of John D. Rockefeller or J. Howard Pew, other histories of the U.S. petroleum industry mention religion but do not make it central to their analyses. In Anointed with Oil, by contrast, we read about “sacred meaning” oil held for those who chased it and of the way that “petroleum bankrolled colossal cathedrals, schools, missionary organizations, and foundations, all determined the United States into a resplendent Christian commonwealth.”

But what sort of commonwealth? Darren divides his protagonists into two groups. The first group consisted of the big oil magnates (the Rockefellers are the paradigmatic example, of course), whose philanthropy flowed toward respectable, ecumenical forms of Protestantism. These men “may not have worn biblical convictions on their sleeves,” Darren explains, “but they went about their business with an eye to a higher being and a higher sense of being.” He terms their philosophy “the civil religion of crude.” 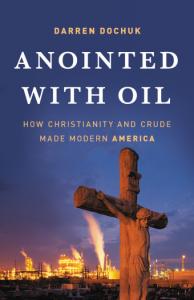 The second group were the wildcatters. “Their modus operandi,” Darren writes, “was to drill discovery wells on untapped land; their prevailing wish, to act alone, be it on the oil field or before their God.” These were the twentieth century’s hottest Protestants, evangelicals and Pentecostals who alleged that big oil and big government were conspiring to take away the freedom and faith they cherished. Anointed with Oil is the collision between these two religious and political philosophies.

Darren ends his story with the collapse of many dreams. The Yom Kippur War, the Iranian Revolution, the oil bust of the 1980s shattered both the “civil religion of crude” and its wildcat counterpart. “In America’s oil extraction and refining zones,” he writes, “petroleum still scars the human body and natural environments, molds social relations, and determines the daily activities and local cultures of the resource’s rank and file.” This is not a cheery book. Oil might have saved Patillo Higgins, but it damned many other men and women.

Still, just as good biographies in the more traditional sense wrestle with complicated subjects, so this “religious biography” of American oil is neither exposé nor hagiography. Was oil a scourge? Certainly in the way that the oil industry ruined landscapes and bodies. At the same time, oil was a source of tremendous prosperity. It fueled American power, but it also sustained the lives of hundreds of thousands of ordinary families. (There’s a wonderful bit about the rise, near collapse, and rise of the Grandview Assembly of God Church in Elk City, Oklahoma — it captures so many of the emotions in this book). Oil bankrolled countless evangelical ministries, colleges, and churches.

Pitched equally well toward scholars and general readers, Anointed with Oil explains how oil transfixed individuals Americans and transformed the place of the United States in the world. 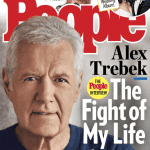 September 11, 2019
The Many Faiths of Alex Trebek
Next Post

September 13, 2019 The Cremation Revolution
Recent Comments
0 | Leave a Comment
Browse Our Archives
get the latest from
Anxious Bench
Sign up for our newsletter
POPULAR AT PATHEOS Evangelical
1