In my last column, I discussed how shifting perceptions of death contributed to weakening traditional religious faith. Today, I’ll pursue that theme in the context of burial and funerals.

Like many other churches, my Episcopal parish has in recent years installed a columbarium, a wall of compartments or niches in which the ashes of the dead are preserved in their urns. It’s a moving place of peace and remembrance. But the more you know about the long span of Christian history, the more astonishing such a place appears. Only very recently indeed has cremation gone from being utterly unthinkable and appalling to something thoroughly normal, approved, and even preferred, and so totally that even informed observers are astonished to know that things were ever different. It’s a fascinating comment on how – even within a religious context – the unthinkable becomes normalized, and vice versa.

Ways of handling the dead are of great interest to archaeologists and anthropologists, because they normally tell us much about how we understand the afterlife, and what exactly continues after death. Very early people buried their dead with grave goods, suggesting that they thought life continued much as before, albeit in some other realm. When various societies then adopted cremation – think Homeric Greeks or Vedic Indians – that implies a belief in the afterlife of a soul or spirit separated from the physical body.

Christians sternly rejected grave goods, but they insisted on burial, with the preservation of physical remains that could provide a basis of bodily rising again on the Last Day – in “sure and certain hope of the Resurrection to eternal life.” And to underline, that resurrection would be a material, bodily, event. Churches varied as to how precisely they specified the details of that Resurrection, but in popular belief at least, preserving at least some physical traces was essential, for good and evil alike. The rare exceptions to that rule involved the punishment of extreme heretics, whose burning at the stake removed the hope of bodily Resurrection.

Today we think of cremation as one option, which might be more or less popular in particular societies. That was absolutely not the case in Christian Europe. From the time of conversion in the fourth and fifth centuries through quite modern times, cremation was absolutely not an option, and was strictly prohibited by law. In England, it counted as illegal disposal of a corpse, or corpse abuse. Not until the seventeenth century did a few eccentrics even dare to propose such a monstrous custom, even as a wild speculation. Cremation only became legally possible from the 1870s onward, and even then the custom faced bitter opposition. Europe’s pioneering crematoria date from the 1870s. The first US example appeared in 1876, in Washington, Pennsylvania.

In the British context, you can read the mind-boggling story of Welshman William Price, a truly odd character, who claimed to be a druid, and who in 1884 cremated his son Iesu Grist [Jesus Christ] Price. That act in itself indicates how wildly bizarre the cremation idea was at that point. Price’s legal struggles resulted in the full legalization of cremation, which in England at least came only with a 1902 statute. By the 1880s, England even had its first crematorium, although its operations were denounced by activists, and protested by angry mobs. The situation was not unlike that of abortion clinics in the modern US.

One obstacle that cremation advocates had to overcome involved the element of fire, which in traditional thought was associated with damnation, and Hell. That image remained strong in popular thought and culture well into the twentieth century. Much work was needed to draw the critical distinction between fire as punishment and as purification. Yet cremation was increasingly tolerated.

Faced with a sweeping social change, churches reacted in puzzlement. In 1908, the Catholic Encyclopedia blamed the new fashion on anti-clericalism, secularism, and Freemasonry, but grumblingly noted that church teachings did not absolutely forbid cremation. The whole Encyclopedia article actually repays reading in full, in suggesting just how desperately contentious the whole matter was. I offer a sample:

The legislation of the Church in forbidding cremation rests on strong motives; for cremation in the majority of cases today is knit up with circumstances that make of it a public profession of irreligion and materialism. It was the Freemasons who first obtained official recognition of this practice from various governments. The campaign opened in Italy, the first attempts being made by Brunetti, at Padua, in 1873. Numerous societies were founded after this, at Dresden, Zurich, London, Paris. In the last city a crematory was established at Pere Lachaise, on the passing of the law of 1889 dealing with freedom of funeral rites.

The Church has opposed from the beginning a practice which has been used chiefly by the enemies of the Christian Faith. Reasons based on the spirit of Christian charity and the plain interests of humanity have but strengthened her in her opposition. She holds it unseemly that the human body, once the living temple of God, the instrument of heavenly virtue, sanctified so often by the sacraments, should finally be subjected to a treatment that filial piety, conjugal and fraternal love, or even mere friendship seems to revolt against as inhuman. Another argument against cremation, and drawn from medico-legal sources, lies in this: That cremation destroys all signs of violence or traces of poison, and makes examination impossible, whereas a judicial autopsy is always possible after inhumation, even of some months.

And so on, at length.

In conclusion, it must be remembered that there is nothing directly opposed to any dogma of the Church in the practice of cremation, and that, if ever the leaders of this sinister movement so far control the governments of the world as to make this custom universal, it would not be a lapse in the faith confided to her were she obliged to conform.

Let me repeat that line: “The Church has opposed from the beginning a practice which has been used chiefly by the enemies of the Christian Faith.” How many Christians today know that this was even an issue, any place, any time? Or realize that just a hundred years ago, cremation could be described as the goal of a “sinister movement”?  Not until 1966 were Catholic clergy permitted to officiate at cremations. Nor were Catholics alone in their rejection of the practice: some Anglican leaders were quite as outspoken.

Just how deep divisions ran among Christians is suggested by a letter written by C. S. Lewis in 1940, describing a passionate row within the famous Inklings:

At our Thursday meeting we had a furious argument about cremation. I had never realised the violence of the Papist dislike of the practice, which they forbid. Neither Tolkien nor [Robert] Havard, to my mind, produced a real argument against it, but only said ‘you’d find in fact’ that it was always supported by atheists; and that a human corpse was the temple of the Holy Ghost. I said ‘but a vacated temple’ and said it wd. be reasonable to blow up a Church to prevent it being defiled by Communists. They denied this, and said that if you destroyed a chalice to prevent it being used for Black Mass you wd. be mortally guilty: for it was your business to reverence it and what the magicians did to it afterwards was theirs. I was surprised at the degree of passion the subject awoke in us all.

I’d love to tell you that G. K. Chesterton had theological words of substance on these issues. He didn’t. But in his poem “The Song of the Strange Ascetic,” he mocked modern cremation practices as part of the general foolishness and faddery he associated with liberal secularists who thought themselves too good for Christian faith:

If I had been a Heathen,
I’d have piled my pyre on high,
And in a great red whirlwind
Gone roaring to the sky;
But Higgins is a Heathen,
And a richer man than I:
And they put him in an oven,
Just as if he were a pie.

As the twentieth century progressed, the popularity of cremation only grew. Cremation rates in what was once Protestant Europe normally run upward of seventy percent, although they are somewhat lower in traditionally Catholic societies. The British rate now approaches eighty percent.

As late as 1960 scarcely four percent of Americans were cremated, compared to 25 percent by 1999, and today’s figure is over fifty percent. That includes millions of faithful Christians, who presumably have no doubt about doctrines of bodily resurrection. Interestingly, there is still a substantial regional division that has some correlation with degrees of religiosity and religious practice: Southerners are still more reluctant to cremate than are Westerners. Nor are theological objections extinct, as suggested by this thoughtful piece from the Gospel Coalition, which quotes the weighty voice of Russell Moore:

For Christians, burial is not the disposal of a thing. It is caring for a person. In burial, we’re reminded that the body is not a shell, a husk tossed aside by the “real” person, the soul within. To be absent from the body is to be present with the Lord (2 Cor. 5:6–8; Phil. 1:23), but the body that remains still belongs to someone, someone we love, someone who will reclaim it one day.

Even so, when Los Angeles’s Roman Catholic Archdiocese opened the spectacular new Cathedral of Our Lady of the Angels in 2002, the building’s mausoleum included columbarium niches. Columbaria have sprouted in  major churches across the denominational spectrum, including among Baptists.

The US is moving fast to European conditions, where cremations greatly predominate. I have not looked at this in detail, but I would speculate that the recent surge of cremation would have some correlation with the increasing number of Nones, those rejecting any religious affiliation.

All told, that is a remarkable historical and cultural revolution, and one that most of us barely note. It makes us wonder: what other cultural and religious revolutions have we lived through, but which have simply escaped our notice?

A follow up question might be: what ideas or practices are absolutely unthinkable for Christians today, but in a century or so they be standard and normal? And again, vice versa?

Peter C. Jupp, From Dust to Ashes: Cremation and the British Way of Death (Springer, 2005)

Stephen Prothero, Purified By Fire: A History of Cremation in America (University of California Press, 2001). 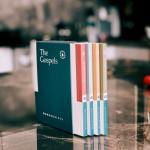 September 16, 2019 The Four Gospels, and the Through Four
Recent Comments
10 Comments | Leave a Comment
Browse Our Archives
Related posts from Anxious Bench