Being Naked and Unashamed

Funny–our realtor did not point out the nudist camp around the corner from our new house when we were getting ready to sign the papers.  Location, location.

Lake o’the Woods dates from the 1933 when a group of Chicago-based investors settled their club on a parcel of farmland and marshy woods they bought in Valparaiso, Indiana, around some small, attractive lakes. Proud to be the second oldest nudist club in the US, the camp “advocates social and recreational outdoor nudity as a good-health (gesundheit!) practice,” laying claim to Freikörperkultur, or Free Body Culture (FKK) principles. It’s a rustic place, offering family-friendly “non-sexual social nudity.”  Its posted sign greets guests: “Welcome All Ye Who Seek Sunshine and Rest for Here They Are Abundant.”

Nudists, naturists, FKK-adherents, as they might variously choose names, claim that the human form is not by itself sexually provocative as it becomes when framed, say, by teeny bikinis or high hemlines.  They contrast themselves to “textiles,” those of us who prefer to cover bodies with cloth.  As Brian Hoffman explains in his book, Naked, American nudist culture finds its roots in the inspiration of German immigrants.

Part of a more general movement in search of health and spiritual regeneration against the backdrop of urbanization and industrial life, late-nineteenth-century Germans dubbed their movement Freikörperkultur. FKK sought release from the constrained, artificial, and stratified, seeking instead connection with nature and with other human beings, sunshine on bare skin, fresh air, and vigorous exercise. A recent New York Times article by Katrin Bennhold analyzing public nudity in Germany (“A Very German Idea of Freedom: Nude Ping-Pong,” etc.) observes that Germans embrace nudity as a kind of freedom. Believe in it? I’ve seen it done: waders in a Black Forest stream casually leaving their clothes behind on the grassy bank, families wriggling back into sturdy cotton underwear after a splash in the park sprinkler.  In FKK and other conceptions, freedom might be found by abandoning cloth; class differences, shed with jacket and petticoat and undergarment, were to become virtually invisible.

The movement’s relationship with traditional religion is hazy. On one hand, it seems obvious that Christians, particularly in late nineteenth and early twentieth centuries, might find objectionable open display of body parts, no privacy granted one’s private members, a provocation to lust. On the other hand, nudist language certainly does carry a spiritual cast. It is a rejection of the fig-leaf mark of alienation from self and other and creation, an effort to find harmony again.  Some Christians in Germany or Nordic lands where nudity outdoors or in saunas is socially appropriate in contrast see Speedos et al as salacious and unhygienic. Bennhold asks a nude mother of two “why she felt the urge to get naked,” to which the woman retorts, “Why do you feel the urge to wear a wet and clingy bathing suit?” Calling clothes-preferers “textiles,” gets at the moral compromise of modern factory-produced garments, where they come from, who makes them, how their manufacture and waste despoils the environment. 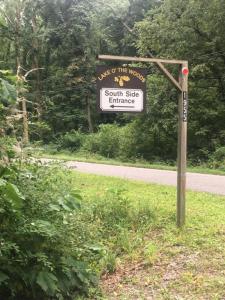 Visitors can enter Lake o’the Woods by paying a daily fee or buying a longer-term “nakation pass,” or can rent an Airbnb for overnight stays. The club insists on a family atmosphere, forbidding as one would expect illegal substances and intoxication, glass bottles, and, more distinctively, clothing at lake, pool, sauna, and hot tub. Anticipating curiosity (“Of course you have questions about social nudity!”), it dryly reminds visits “to, uh, conform to the dress code,” with social nudity mandatory in common areas, weather permitting. If you insist on wearing pajamas in your own private cabin, you are free to follow that predilection, but otherwise, going bare is polite. In a privacy-protecting gesture that well could be extended beyond its gates, the club forbids cameras to discourage the social-media packaging of hours enjoyed within its precincts.

Lake o’the Woods, like nudist clubs and camps more generally, does get sounding a little defensive about their family friendliness. They, perhaps appropriately, propose that if passersby associate nude volleyball or swimming with prurience, well, that’s their problem.  Nudity there is not sexually suggestive but the opposite, as visitors to nudist parks often attest: the FKK fashion seemingly having peaked in the United States a few decades past, such vacationers show signs of age. The unadorned body has spots, wrinkles, flab, scars, asymmetry. It just does.

And there the Nudists have a point. I have no intention of booking a nakation as staycation any time soon. But the freedom language prioritized by Lake o’ the Woods does not feel phony.  Maybe people are as insecure, affected, self-centered, and exploitative nude as clothed–that is, sin comes from inside and not outside, as Jesus reminded–but it could be that being seen by general others, not by one with sexual designs or clinical gaze, unvarnished, could feel to somebody like freedom. I’d maintain that some things about us as fallible humans are better hidden away for our own protection and certainly for that of others–again, what comes from inside a person–but  a case could be made for presenting selves not with best face forward but as whole, blemished, mortal flesh.  Authenticity still seems culturally favored. Here is a form of it, a form of knowing each other warts and all from the very start.  To the extent that some of bear on the body the marks of suffering endured, others become witnesses.

Nineteenth-century Americans attempted plenty of health fads and utopian arrangements variously seeking to restore what busy, modern, industrial life had sullied.  While one can read public nudity as explicit rejection of modesty upheld by a Christian ethic, on the other hand, some might choose to view it as a reach after restoration, to stand like prelapsarian Adam and Eve, naked and unashamed. There are Christians in the United States aiming to live out this posture.  The Garden of Eden Church  (“Worshipping the Lord, Naturally”)  holds services at a nearby Lake Como Family Nudist Resort. Their introductory statement attests:

It is easy for a believer to feel out of place in many churches, wondering if they’d be accepted if people knew their lifestyle. How can we have an authentic spiritual life if it doesn’t encompass all of who we are?….We find no conflict between the teachings of the Bible and living our lives and worshiping God without any clothing…. The Christian definition of the human body should be separate, distinct, and non-materialistic.

Again, my own leanings are not here, but their desire for an “authentic spiritual life” engages a number of concerns common to groups and churches more conventionally attired. 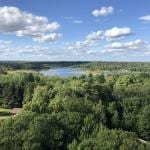 Evangelical
The Religious Left: A Reckoning and a Way...
Anxious Bench
TRENDING AT PATHEOS Evangelical