We Compiled The Bible

I have posted on how the Bible came to take the shape that we know, and how that precise shape varies in different parts of the Christian world. I recently came across a declaration that framed that story nicely, and which demands a “Discuss!” after it.

Catholics Come Home is an evangelistic ministry that appeals to former and lapsed Catholics and seeks to draw them back into active church membership, largely through ads, television commercials, and a practically-oriented website. They offer a selection of “evangomercials” (I groan as to the word, if not the content). Its methods are low key, non-confrontational, and amiable: no harsh polemic here, and definitely no threats of hellfire. The message is a friendly “So you’ve been away for a while? Hey, welcome home!” Reportedly, as measured by mass attendance figures, it has been very successful. Other churches and denominations should follow its general style and approach for their own purposes, but that is another story.

You see a sample of the group’s efforts by watching this commercial, which lists Catholic achievements through the centuries, and among these, we hear, “Guided by the Holy Spirit, we compiled the Bible. We are transformed by sacred scripture and sacred tradition, which have guided us for two thousand years. We are the Catholic Church.” The accompanying materials on the website do add a critical qualification here, namely “we compiled the Bible [I.E. THE NEW TESTAMENT]” [emphasis in original].

One obvious comment presents itself, namely that the church that “compiled” the Bible has its earthly heirs today both in the Roman Catholic and Orthodox traditions. But with that caveat, there is the assertion: the church predated the New Testament, and made it.

How you respond to that claim decides pretty immediately where you stand on the ecclesiastical spectrum, or the Protestant-Catholic divide. It gets to the heart of all debates about authority within the Christian faith. To over-simplify popular attitudes, Protestants think the church is built on the Bible; Catholics think the church formed the Bible – the institutional church, with its episkopoi and presbyteroi, and founded on the Petrine rock.

I like their “compiled” here, rather than (say) “selected,” because other words would get into the issue of why certain books were rejected – why for instance we include the Revelation of John but not that of Peter; or why the Gospel of Thomas never made the cut.

The implications need thinking about, if only to understand where rival traditions are coming from. One, I suppose, is the nature of that Spirit “guidance” that is mentioned, and how that continues within the institution, and the possible limits of later interpretation that it grants. Does that extend to allowing later churches to contradict explicit Scriptural commands or prohibitions? Also, as framed, this formulation specifies the absolute necessity for a church institution, however much or little that church makes explicit use of the Bible.

It all makes for a fascinating contrast with Protestant principles, above all sola scriptura itself. Scripture alone, replies a Catholic? But the church made that scripture, and it can only be interpreted through the church, and above all, through its traditions.

So Protestants might themselves reply: yes, the apostolic church formed the New Testament. But that church was very different from its medieval and later successors, and to the Catholic (or Orthodox) churches of today. But that opens the door to a follow up. If that is correct, then just when did the church lose that original glory and pristine authority? Not presumably before the fifth century, when the church was still holding ecumenical councils that Protestants still respect and follow. But that fifth century church was profoundly hierarchical, clerical, Marian, and monastic, with a strong view of celibacy. In fact, it looks awfully “catholic.” There’s a lot of history to grapple with in all this.

Putting the question another way, how would one challenge the idea that the church compiled (selected, constructed, formed) the Bible? Does anyone think that the New Testament emerged fully formed, according to universal consent, with everyone recognizing from the time of publication that Book A was inevitably destined to be part of scripture, but Book B was not, even if, at the time, far more people venerated and respected B than A? Through a process of debate and controversy that in some cases lasted centuries, the Christian world decided that the New Testament was going to include certain books and not others. That sounds to me a lot like the church “compiling.”

The New Testament was not a self-evident concept or text. It demanded decisions.

You could even argue that Catholics Come Home are being too modest, in that decisions made by the church ensured that modern Christians have the Old Testament they do, which outside Ethiopia at least, does not include such once-potent texts as Enoch and Jubilees. The church didn’t compile the Old Testament, but they selected. Matters might easily have gone another way.

This all raises interesting issues about how that church reached its conclusions, and no less significant, when. Well into the fourth century, and beyond, prestigious churches and church leaders were still debating the contents of the New Testament – not in the precise listing of canonical gospels, but certainly in the range of epistles and other texts that still retained high respect in some places but not others. Debates were long and ongoing, and someone had to make the decisions.

So what do we think? Did the church compile the Bible – well, the New Testament? If not, why not? 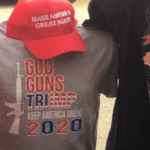 October 3, 2019
What I learned from (almost) attending a Trump rally
Next Post