What I learned from (almost) attending a Trump rally

In January 2016, Donald Trump claimed that he could stand in the middle of 5th Avenue and shoot someone and not lose supporters.

With the impeachment inquiry underway, his words ring prophetic.

With blatant corruption in full view, with the president turning to foreign powers to pursue his own personal gain, claiming that a coup is afoot, and labelling political opponents traitors, his critics are left wondering if there is anything he could do that would cause his supporters to turn from him.

I’ve wondered as much myself.

Just as I was putting the finishing touches on my book, Donald Trump descended upon my hometown of Grand Rapids. It was March 28, just days after Attorney General William Barr released his four-page letter detailing the conclusion of the Mueller Report. Then, too, the country was starkly divided. Wary of falling back on stereotypes in my own analysis, I decided to attend the rally to get a more nuanced, up-close glimpse of the president’s supporters.

I was accompanied by my ten-year-old daughter, a political junkie in her own right. By the time we arrived downtown, the line of supporters stretched around several city blocks. We quickly found our place at the end of the line and settled in for a several-hour wait. 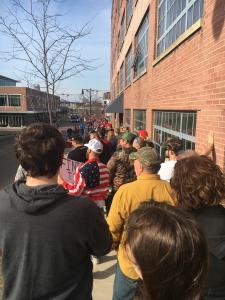 We had no intention of posing as supporters, but neither were we eager to out ourselves as those less-than-pleased with our sitting president. Still, it quickly became apparent that we didn’t look the part.

Although we were white (as was nearly everyone in the line), we were among the only ones not wearing Trump gear, camo, or red-white-and-blue attire. So much for dispensing with stereotypes.

Everyone in the line was friendly, if not giddy with excitement. “Where are you from?” was the standard greeting. Here, too, we stuck out. Although the rally was in Grand Rapids, we didn’t meet anyone else in our section of the line who was from Grand Rapids proper. Everyone else had come in from neighboring small towns and rural areas, some having traveled several hours by car. Although it was a celebratory atmosphere, one man behind us frequently warned his friends not to post pictures of him on social media. He was afraid that he might lose his job if seen at a Trump rally.

He didn’t, however, hesitate to join in the political chatter. There was plenty of that. Victory cries of “Total exoneration” in light of Barr’s synopsis of the Mueller report. Crude joking about climate change (“What a hoax!”). Confidence that “the militia” would show up to protect us if things got out of hand. The “mainstream media” was a punching bag. Alexandria Ocasio-Cortez was an ignorant girl who belonged back behind the bar. Hillary Clinton was a punchline. Barack Obama, however, was no joke. Ocasio-Cortez and Clinton could be laughed off, it seemed, but mention of Obama elicited anger, bitterness, and resentment.

It didn’t take a historian trained in the study of race and gender to identify the centrality of both. American flags that blended into Confederate flags were available for purchase. The militant masculinity I’d spent years charting was everywhere apparent. Vendors were hawking T-shirts boasting “God Guns Trump: Keep America Great 2020,” “Keep Calm and Carry On,” and “Trump .45 (Cause the 44 Didn’t Work the Last 8 Years).” 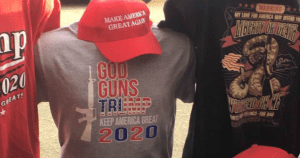 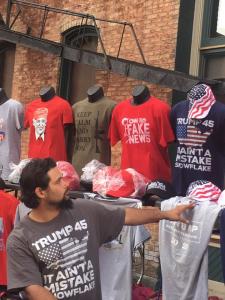 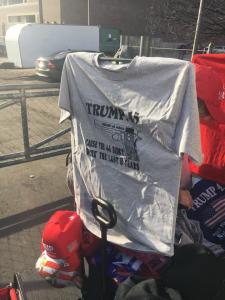 One could purchase pins for “Bikers for Trump,” pins declaring support for the Second Amendment, pins insisting that “Deplorable Lives Matter” and that “Hillary Sucks! But not like Monica!” Meanwhile, “Hot Chicks for Trump” shirts could be purchased, as could hot pink “Trump Girl” t-shirts emblazoned with a star-spangled stiletto heel. 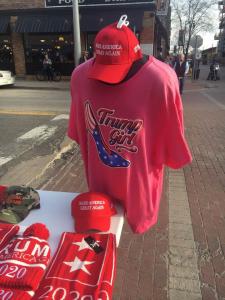 Other t-shirts gleefully promised to “Make Liberals Cry Again,” and provided assurances that Trump “Ain’t A Mistake Snowflake.” Again, so much for demolishing stereotypes.

Then, three hours into our wait, as the line continued to snake between downtown buildings, the mood began to change. The scheduled start time was drawing nearer, and we peered anxiously at the distance remaining between us and the entrance gates. Late-arriving supporters started to cut in line ahead of us, and our anxiety grew. We’d waited for hours, but it wasn’t at all clear that we’d make it inside.

We were behind the arena when the motorcade pulled up. Trump emerged and the crowd went wild. Once Trump was inside, attention once again turned to the line that stretched ahead. We all sensed it would be close.

It was at this point that something strange happened. For the first time that day, my daughter and I started to feel at one with the crowds. We didn’t share in their support of the president, it’s fair to say, but we all had the common goal of making it inside those doors—even if for very different reasons.

Turning the corner in front of the arena, we came face to face with protestors. The noise was deafening, the shouting back and forth obnoxious. My daughter grabbed my arm in fear. I reminded her that many of the protestors on the other side of the barricades were, in fact, our friends. Some were co-workers, some went to our church. We both knew it, but in that moment, it didn’t seem to matter. We were, quite literally, on the other side. From our vantage point, they did seem threatening. And I began to understand.

Other adults began to lavish attention on my daughter. Didn’t she love our president? Wasn’t she proud to be there? And then, suddenly, the line started moving quickly. Crowds were rushing the door. We almost made it in, but when the doors closed, we were stranded outside.

We did, however, have a front-row view of the jumbotron. We listened to Trump rail that “The Russian Hoax Is Finally Dead”—“the collusion delusion is over.” He mocked “little pencil-neck Adam Schiff,” went after the “fake news” media, and accused Democrats of “defraud[ing] the public with ridiculous bullshit.” He was draining the swamp, and he denigrated elites in Washington (“I’m president and they’re not.”)

My daughter was given a MAGA hat. She refused to put it on. We listened to the wild applause inside and outside the arena, but we were silent. When we finally decided we’d heard enough, we slipped through the crowd, walked down the street, and went out for Chinese take-out.

I’d gone to the rally hoping to gain a more nuanced understanding of “the other side,” hoping to realize that we shared a common ground if we only bothered to look. Instead, I left convinced that the gulf separating Americans along partisan lines was wide indeed. Perhaps insurmountable.

With news of impeachment dominating the headlines, I find myself transported back to that Trump rally, and fixated on that gulf. I’m also filled with a sense of wariness, a fear that anger—even righteous anger—may only make things worse. 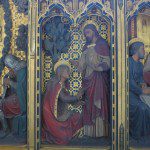 October 2, 2019
What If Biblical Womanhood Isn't Biblical?
Next Post 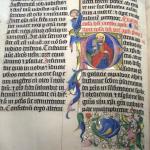 October 4, 2019 We Compiled The Bible
Recent Comments
7 Comments | Leave a Comment
"This is an issue that I have been puzzling over for a long time. Thanks ..."
Douglas Ward Peopling the Biblical World
"Clarke,I think you underestimate the number and severity of the disagreements Roger and I have ..."
Curt Day What is a Conservative Christian College? ..."
"So, "medieval glory"? Is the glory because some think it pretty...irrespective of genocides? The art ..."
Daniel Johnson How Did the Reformation Matter for ..."
"Here I am, five years late, seeing that you quoted and engaged with my comment. ..."
Adam Gonnerman Counting Baptists and Naming Baptists
Browse Our Archives
Related posts from Anxious Bench