Yesterday was a hard day at Bethel University. I don’t know the exact numbers yet, but we had been told to expect that upwards of thirty faculty positions would be eliminated after next year. Even though my position isn’t affected, it’s been painful to hear word trickle out about colleagues who weren’t so fortunate. (And the scale of these cuts had been determined long before we knew about COVID-19; it’s possible we’re not done making painful choices.)

As I steeled myself for this week, I wrote a post at my own blog trying to balance lament and hope. Amid idealistic words that managed “to sound braver than I really feel,” the most concrete conclusion I reached was this: “Whatever else happens this week and next year, my chief task is to continue doing my job as a professor.” Right now, that means weeping with my colleagues who weep and continuing to do my best to teach spring classes that were never meant to be taught online.

But it also means that I’m spending more time than usual thinking ahead to the fall, when I’ll be teaching two courses that weren’t in my rotation this past year. As I fret that a worsening economy will tempt universities like mine to “make more compromises, not fewer,” teaching such classes is the best way I know to keep Bethel “from drifting further from its core mission as a liberal arts college that bears witness to Jesus Christ: seeking the truth found in him, transforming students in his likeness, and spreading his kingdom.”

The first course is a section of a first-year multidisciplinary seminar I’ve taught before, but not on this topic. The second is a history/political science elective I’ve taught every year or two since coming to Bethel seventeen years ago; it’s familiar, but how I teach that topic has changed as scholars and foreign policymakers have continued to debate its meaning.

What they have in common is that they’re general education courses primarily meant to help non-history majors consider the experience of war from different perspectives. I’ll share a brief summary of each in case they’re interesting to readers (who might find some new reading material). Or, failing that, because talking through classes on warfare (perversely) helps me feel a bit more hopeful about the near future.

A relatively new addition to our curriculum, Inquiry Seminar (“IQ”) has about 6-8 sections per semester, each taught by faculty from throughout our College of Arts and Sciences. The goal is not so much to introduce students to a single discipline — or even to teach from a professor’s field of expertise — but to work together to ask a broad question that helps introduce students to the Christian liberal arts, while simultaneously honing skills in critical thinking, reading, research, writing, and speaking. I taught a section three years ago when IQ debuted and found it a significant improvement on the composition course and extended college orientation that it replaced. The first time through I was teaching in the aftermath of the 2016 election, so I had students consider what it meant for Christians to seek unity in the midst of polarization. This coming fall, my goal is very different.

While United States has been at war for most all their lives, most of our students have no direct experience of war, as fighting is left to a professional military and the government requires little sacrifice by other citizens. For the vast majority of Americans, what the Prussian military theorist Carl von Clausewitz called “the fog of war” has never been harder to see through.

While we’ll start close to my academic home and consider about how military historians like John Keegan help us glimpse “the face of battle,” my goal is to move quickly to other disciplines in the arts, humanities, and social and natural sciences. Most broadly, I want to ask how the liberal arts can help us to see war more clearly. Each week we’ll try to clear up the “The Fog of War” via a different academic discipline: not just The History of War, but The Psychology of War, The Economics of War, The Physics of War, and The Literature of War (e.g., as seen in Sam Hynes’ highly readable survey of soldiers’ writings about the two world wars and Vietnam, or this new anthology of Afghanistan/Iraq poetry),

I’m especially excited for two weeks that should be especially challenging for students: first, one on The Gender of War, during which students will read and review a book by and/or about American women fighting in Iraq or Afghanistan, such as one of those recommended by Iraq War veteran and memoirist Kayla Williams; second, a week on The Ethics of War, where I want students to hear anti-war voices like that of Leo Tolstoy and those of the Mennonites who issued this statement four years before Pearl Harbor.

Then the other course — one that I first brought to Bethel in 2004 — dives in closer to examine a specific conflict, albeit one that Americans tend to think about as a war that didn’t happen. The author of our main textbook (one of my graduate advisers) even dares to call his concluding chapter “The Triumph of Hope.” 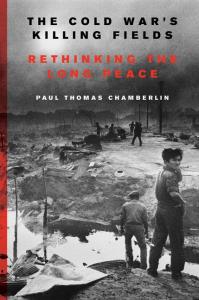 But as Paul Thomas Chamberlin points out, that’s not how things necessarily looked to those who lived and died in “the Cold War’s killing fields,” a vast swath of land, stretching from the Middle East through Southeast Asia, that

skirted the frontiers of the Communist world and, together with Europe’s Iron Curtain, formed the front lines of the Cold War. Here, along Asia’s southern rim, superpower armies, postcolonial states, and aspiring revolutionaries unleashed three catastrophic waves of warfare that killed more than fourteen million people. The superpowers flooded these lands with foreign aid—eighty cents out of every dollar Washington and Moscow sent to the Third World ended up here. Ninety-five percent of Soviet battle deaths occurred inside this stretch of territory. For every thousand American soldiers killed in combat during the period, only one died elsewhere.

We’ll revisit that part of Eurasia in our closing weeks, as we consider the notion that the United States is entering a “new cold war” with China, Russia, or both. At that point, I’ll also have students read an author who sees little that’s triumphant or hopeful about the Cold War. A former Army officer who served in Vietnam and then taught history at West Point, Johns Hopkins, and Boston University, Andrew Bacevich is a conservative Catholic writer who has criticized the “permanent war” that America seems to be fighting in the Middle East and Afghanistan. (In 2007 his son was killed in action in Iraq.) In The Age of Illusions, he punctures the supposed Western victory of 1989-1991: “…hidden within an apparent windfall is the potential for monumental disaster… Confident that an era of unprecedented U.S. economic, military, and cultural ascendancy now beckoned, members of an intoxicated elite threw caution to the winds.” While I tend to sympathize with the point of view of the people he’s criticizing, Bacevich’s argument is an important one for our students to consider.

But the larger benefit of studying the Cold War at a Christian liberal arts college like Bethel is that it helps students think more broadly and clearly about two p-words: power and peace. The Cold War, after all, pitted two superpowers against each other and hinged on the potential use of nuclear power. And in the process, the Soviet and American governments maintained a kind of peace for four decades — never fighting the thermonuclear third world war that everyone feared. But what that history seems to reveal are the limits of earthly power (e.g., as when seemingly “weak” countries ended up shaping the foreign policies of the mighty U.S. and U.S.S.R.) and that a biblical understanding of peace demands more than just a “cold” war — as Pope John Paul II preached during the deepening crisis of the early 1980s, at the English cathedral built on the site of one ruined during World War II:

What is this peace for which we long? What is this peace symbolized by the new Cathedral of Coventry? Peace is not just the absence of war. It involves mutual respect and confidence between peoples and nations. It involves collaboration and binding agreements. Like a cathedral, peace has to be constructed, patiently and with unshakeable faith.

Wherever the strong exploit the weak; wherever the rich take advantage of the poor; wherever great powers seek to dominate and to impose ideologies, there the work of making peace is undone; there the cathedral of peace is again destroyed.

This post is partially adapted from course previews I published earlier this month at our department blog, alongside colleagues’ posts on courses about business history and the Middle East. 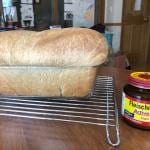 April 23, 2020 The Geneva Bible
Recent Comments
0 | Leave a Comment
Browse Our Archives
get the latest updates from
Anxious Bench
and the Patheos
Evangelical
Channel
POPULAR AT PATHEOS Evangelical
1