The Changing Meaning of V-E Day

Seventy-five years ago today, the United States, Soviet Union, Great Britain, and their allies formally accepted the unconditional surrender of Nazi Germany, marking victory in Europe even as the war against Japan continued. Because of concerns about the coronavirus, this morning’s wreath-laying at the WWII Memorial in Washington, DC was a muted affair, with President Donald Trump joined by just a handful of American veterans who had originally planned to spend the weekend in Moscow, where the Great Patriotic War is remembered on May 9: Victory Day.

But one way or another, I fully expect Americans and others to spend this anniversary weekend making meaning of the past in light of the present — and to continue using war in general (and WWII in particular) as a metaphor. That might be especially evident in 2020, the first presidential election year to coincide with a major V-E Day milestone, but it was also true of 1970 and 1995.

The 25th anniversary of V-E Day, for example, came in the context of the Vietnam War. President Richard Nixon had announced the invasion of Cambodia on April 30, 1970, then days later National Guardsmen killed four students protesting at Kent State University. On V-E Day and the weekend that followed, tens of thousands marched against the war in cities like San Francisco and Washington (where Nixon famously held a spontaneous late night conversation with student protesters at the Lincoln Memorial). A much smaller march in New York was matched by a counter-protest organized by WWII naval veteran and labor leader Peter Brennan; about seventy people were hurt in the so-called Hard Hat Riot. Twelve days later, 150,000 people protested peacefully in the same city in support of Nixon’s war effort. (A Democrat, Brennan became Nixon’s secretary of labor after campaigning for him in the 1972 election.)

“Few peaceful years have existed since then in this warring world of hot and cold conflicts,” the New York Times editorialized the weekend of the 25th anniversary of V-E Day. Just as some veterans of the war in Europe feared being sent to the other side of the world in 1945, their sons were

still getting their shipping orders to the Pacific. They are headed for Vietnam and Cambodia—colonial outposts given up by former World War II allies—to fight and perhaps die in a war that was never declared and that is dividing instead of unifying the country.

No war is good, but Vietnam especially has given war a bad name. It has dimmed the meaning and necessity of wars for sheer survival as was the Second World War, fought against powerful dictatorships bent on destroying the democracies.

For its part, the Soviet leadership chose that anniversary to denounce the USSR’s former ally. In his Victory Day speech, defense minister Andrei Grechko pointedly refused to mention the U.S. in thanking countries that had helped defeat Nazi Germany, and instead condemned American interventions in the Third World.

Of course, it had been less than two years since the Kremlin had preceded the 30th anniversary of the Munich Conference by invading Czechoslovakia. But in May 1970 British historian Arnold Toynbee argued in the Times that he would rather be “be a Czech who was being ‘saved’ by the Russian Army” than a “a Vietnamese who was being ‘saved’ by the American Army.” He suggested that Nixon’s America struck most Europeans as “the most dangerous country in the world… In terms of the number of lives taken and of lands laid waste, America’s score is, unhappily, far higher than any other country’s since the end of World War II.”

It wasn’t just the superpowers connecting WWII to the Cold War. That same weekend, Polish Communist leader Wladyslaw Gomulka used the occasion to extend an olive branch to West Germany, whose chancellor, Willy Brandt, became the first German leader to mark the anniversary. Brandt used his Bundestag address that day to argue that the postwar democracy of the Federal Republic “knows no silent majority” — unlike its American ally — “and no anti-democratic minority of any consequence.” Seven months later, Brandt’s Ostpolitik took him to Warsaw, where he fell to his knees at the memorial to the resisters in the city’s Jewish ghetto.

A quarter-century later, with the Cold War over, the memory of World War II was dedicated to reconciliation. American president Bill Clinton was in Moscow for the golden anniversary of Victory Day, reviewing a parade of Russian veterans alongside Boris Yeltsin. The chancellor of reunified Germany, Helmut Kohl, participated in the rededication of Berlin’s New Synagogue (a month before paying a state visit to Israel).

Other Americans marked the end of history with a distinctly capitalist mode of commemoration. In May 1995 Times advertising columnist Stuart Elliott noted how companies from car manufacturers to brewers were using the anniversary to imbue promotional campaigns ‘with patriotism, nostalgia, and even some humor.” The marketing director for Schlitz beer hoped that sponsoring nationwide tours of B-17 and B-24 bombers and reviving wartime pitches (“Every fourth bottle of Schlitz goes overseas”) in radio and print campaigns would “be a good platform to reintroduce the brand to a younger generation.”

Historian Alan Brinkley took to the pages of the same newspaper to recall how “optimism mingled with doubt” in May 1945, as Americans celebrated the end of a war that had “revealed a human capacity for evil and destruction that exceeded even the darkest assumptions of previous eras.” At the same time, there was hope for progress in 1945. While Brinkley knew that retrospect made it

easy to see the many flaws in these expansive visions of a postwar world… it is also difficult to look at today’s world — a world of diminished expectations and profound cynicism — without finding something appealing about the brief and admittedly deceptive moment when large numbers of Americans, at the close of the most catastrophic war in human history, found it possible to believe that a brave new world was at hand.

If expectations were low and cynicism ran deep in 1995, I’m not sure how to describe our national mood in 2020. But the appeal of World War II endures amid our current public health crisis.

We’ll see what he says this weekend, but Donald Trump has proven himself eager to compare 2020 to 1941-1945. “To this day,” Trump said on March 18th, “nobody has ever seen like it, what they were able to do during World War II… Now it’s our time. We must sacrifice together, because we are all in this together, and we will come through together.” Having long since styled himself “a wartime president,” Trump has more recently has exhortated Americans to be “warriors” and risk their health for the sake of restarting the economy.

It’s not just the president using such language and analogies as we mark the 75th anniversary of the war against fascism. Politicians from presumptive Democratic nominee Joe Biden to French president Emmanuel Macron have also talked about being “at war” with the coronavirus. And others have made more direct allusions to WWII. Calling for Major League Baseball to start play as soon as possible, sports agent Scott Boras last week appealed to the example of President Franklin D. Roosevelt, who encouraged the National Pastime to go on during WWII as “chance for recreation” for weary war workers. “It is time again for baseball to serve,” Boras argued.

“War has been a permanent condition and the governing metaphor for American life since at least the Second World War,” acknowledged historian Paul Renfro last month in Time magazine. But he warned that “the nation’s commitment to war (both as reality and metaphor) has a tendency to take other policy approaches off the table”; using it “as a rhetorical and framing device within our present crisis therefore represents a dismal failure of imagination.” In The Christian Century, religion scholar Jason Mahn both hoped that “we beat COVID-19, kicking the crap out of each small set of genes enclosed in fatty lipid molecules and armored with protein spikes” and expressed his concern “about the collateral damage to our collective character and individual dispositions that might result from using the language of war.”

So this V-E Day, perhaps Christians should both remember the terrible sacrifice and costly victory of seventy-five years ago and join Mahn in remembering that Christians can read from other, less militaristic “scripts for living well with loss” (e.g., Job, the Psalms, Lamentations, the gospels’ stories of crucifixion and resurrection). Perhaps we should consciously spend this weekend asking some of the questions he suggested, versions of which certainly weighed on followers of Jesus in May 1945:

What will it mean for our country and world to live well with this pandemic? Will we be patient and kind? Will we be able to truthfully accept and faithfully bear this tragedy, even as we try to conquer it? How will we care for those who cannot be cured—a question made painfully difficult by the six or more feet of space that separates the dying from their families? How well will we grieve—privately in our homes, locally in shifts of ten, and collectively as a human race?

May 8, 2020
American Prophets and the Progressive Religious Tradition
Next Post 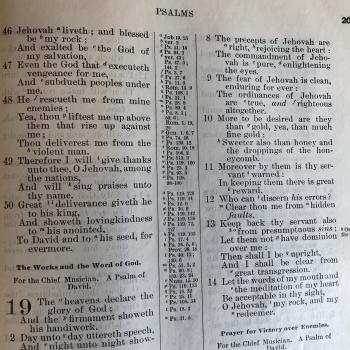