Church Ladies Do More than Doughnuts

After church when I was a little my siblings and I would file down to the One World Room and eat doughnuts whiling away time when my mother talked to her friends at coffee hour. Plenty of time for consumption of a staggering lot of doughnuts, eaten under the watchful eye of the UN assemblies and migrant farmworkers illustrated on the walls behind us. To clarify: this was the late 1970s, church was Cornell Catholic Community, meeting on a college campus maligned as “Godless” since its pointedly nonsectarian 1865 founding.  Neogothic Anabel Taylor Hall accommodated believers of all stripes, our socially conscious, low-church Roman body alternating use of this sanctuary with other faiths supported by Cornell United Religious Work.  We passed the Eucharistic elements, sang “Morning Has Broken” and “Blowin’ in the Wind,” and self-consciously called our priests by their first names. Then the five of us worked our way through glazed, sprinkled, and Boston crème while Mother and the women talked.

With the publication of Mary Henold’s new book, The Laywoman Project: Remaking Catholic Womanhood in the Vatican II Era, I understand better those estimable women holding us up at coffee hour.  American women from the mid-1960s contended simultaneously with conclusions of the Second Vatican Council (1962-1965) and the rise of feminism.  They were not merely swept along (or under) by currents whirling out from these events but acted in them variably, decisively, consequentially. 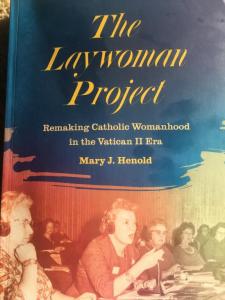 The Council called laity take up new responsibilities and gifts as church met modern world.  One of the Council’s principal documents, Lumen Gentium, exhorted, “Upon all the laity, therefore, rests the noble duty of working to extend the divine plan of salvation to all men of each epoch and in every land. Consequently, may every opportunity be given them so that …they may zealously participate in the saving work of the Church.”  This was no straightforward commission for female members of the laity. On one hand, they were called to raise sights from traditional attentions to home, family, and parish to address the wide needy world. On the other hand, retained emphasis on women’s essential difference from men made new gestures tricky.

Henold has written previously on Catholic feminists. Many scholars have studied postconciliar shifts among women religious.  Both these areas of scholarship tend to miss the in-the-middle experience of laywomen. Catholic laywomen offered a thoughtful range of responses to the big questions of the era that changed over time. Just because most did not self-identify as feminists does not mean they sat out the revolution. Henold borrows the viewpoint of feminist Sister Margaret Ellen Traxler, “you were either on the side of the angels, or you were on the side of Phyllis Schlafly; there was no in-between.”  But there was an in-between, and the thinking, recalibrating, and organizing of those women in between deserves attention.

The author shows how much we need a “readjustment to consider moderate, nonfeminist Catholic laywomen as vibrant and significant originators of discussion about gender.”  Henold names this activism the laywoman project, pursued through membership in women’s organizations and in writing articles, conference presentations, and letters to editors. This composite of doings represents “significant, creative work of laywomen undertaken at their own urging, and on their own behalf.”

Much noteworthy activity comes from “largely nonfeminist laywomen at a particularly unsettled moment.” The Laywoman Project studies three sets of organizations.  The book traces shifts in questions of essentialism and complementarity, roles in church and home, relationships among laywomen, clergy, and women religious.  Theresians, for instance, moved from advocating vocations—encouraging young women to consider taking vows–to encouraging the “vocation of Christian womanhood” for all, laywomen not subordinated to nuns. The National Council of Catholic Women (NCCW) with much larger membership took up broad priorities including liturgy, ministry, women’s roles, even ecumenism and interracial action.  The organization urged its members not to limit their ministry to parish business and altar guilds. Instead laywomen should study theology, read papal documents and encyclicals, to “strive to equip ourselves  for responsible action in the intellectual and apostolic renewal called for by the Council.”

With real nuance and admirable earnestness, women pondered how to align the Council’s call for more lay participation with ideas of gender complementarity in marriage and church.  At end NCCW leaders like Margaret Mealey aimed for what Henold characterizes as a kind of “pragmatic feminism” combining moderate statements for women’s equality with rejection of “militant” activism and assumptions about women’s essential nature.  For some NCCW members even this was too much. Feedback from a 1968 conference included one commentator saying, “Let the laity stick to their knitting and let the appointed clergymen run their end of the business,” and another noting drily, “One such hand clapping Mass would have been more than enough.”  The Catholic Daughters of America and the Daughters of Isabella, in contrast to other groups, preferred traditional emphases on female duty and piety to the Council’s new urgings to activism.

Some of Henold’s most interesting sources come not from women’s groups but from the pages of a magazine, Marriage, published by Benedictines.  Edited mostly by men and supervised by clergy, the journal opened its pages to shifting opinion, sustaining long lay conversations about essentialism,  complementarity, sex, contraception, marital equality, and female employment. Questions about women’s roles as wives and mothers bore implications for the church, and their convictions about the church affected roles of wives and mothers.  Male and female voices come through, articulate, pained, and funny. What Henold calls the “cry of the unhappy Catholic housewife” echoed in several tones.  Sometimes women expressed delight in domestic labors of love to husband and children, and other times women regretted the work if not the loved ones.  A 1965 woman writer offered a theology of housework, “Dirty dishes, dirty diapers, dusty floors, unwashed bodies…..It’s the housewife’s special little share in the Redemption to be able to atone for others’ sins by washing others’ clothes.”  A different writer, explaining why a housewife might be reluctant at her tasks, turned to the psalms: “The psalmist summed up the classic reason centuries ago: Lord, ‘I am shut in. I cannot escape.’”   One husband rejoiced that he was “a much more flexible husband than my father was…..[when] The husband could be a tyrant and get away with it.” Another rued, “My biggest complaint about women is that they have become obnoxiously aggressive….I feel as if we are trapped in Unisexville.”

Though the historical particularities of Catholic piety in the United States and the Second Vatican Council loom large, occasionally Henold draws comparison to Protestant women’s similar strugges.  And her epilogue revisits the relevance of these questions as women’s gifts to church and community are simultaneously invited and restricted.  Henold summarizes the key question this way: “How could laywomen’s role as laypeople be expanded if the church still taught that women’s nature was basically fixed and subordinate?” Women in 1960s and 1970s America wrestled with this puzzle in ways instructive to us still.

Looking both behind and ahead, Henold quotes a committee report from an NCCW meeting. “The church in America needs women with a ‘willingness to share their talents,’ read a proposed conference resolution from the Church Communities Commission in 1966. But not to staff the doughnut table.”

June 12, 2020
Writing History on the Banks of Spoon River
Next Post 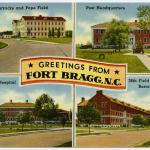 June 16, 2020 It's Not "Erasing History" to Remove Confederate Memorials
Recent Comments
0 | Leave a Comment
"I just ordered Moral Minority and your own book at the same time 🤓"
Dr_Grabowski Northern Baptists (Not Just the Southern ..."
"Sir, having trouble posting here. Have you a public email address where we could talk ..."
Dr_Grabowski Northern Baptists (Not Just the Southern ..."
"It would be a really good time for evangelicals to confront their racist present, what ..."
John (not McCain) Juneteenth: A Holiday “Tailor-Made for History”
"Gene-Editing and Cybernetics are the future. With aging gone the bronze age fairy tales will ..."
AlabamaisChristianWhiteTrash The Religious History of Extraterrestrial Life
Browse Our Archives
get the latest from
Anxious Bench
Sign up for our newsletter
POPULAR AT PATHEOS Evangelical
1

Evangelical
Two Questions for Complementarians (and One for Egalitarians)
Anxious Bench