Many of the events in the Christian liturgical year coincide with older seasonal celebrations, which the church absorbed and consecrated. We think of Christmas (Midwinter), Easter (Spring) and All Saints/All Souls (the beginning of Winter). Sadly, Western churches at least have forgotten what was once one of the greatest of these parallel commemorations, which almost amounted to a second Christmas. Somewhere along the line, we forgot St. John the Baptist – whose feast we commemorate next week.

For the early church, John the Baptist was clearly a critical figure. In fact, New Testament writers had to argue against those who saw him as at least comparable to Jesus. He was reportedly a blood relative of Christ himself. Not surprisingly, then, the later church made him a mighty hero of the faith, and built him into its emerging calendar. But when you did that, the Biblical evidence pointed to an interesting correlation with Christ’s own career. If John’s mother was in her sixth month of pregnancy when Mary conceived (Luke 1.36), then logically John was born half a year earlier than his cousin. As the church increasingly associated Jesus’s own birth with Midwinter, then inevitably, John’s must have fallen at Midsummer. Hence, John’s nativity became fixed at June 24. A related calculation determined that the Annunciation to Mary should be celebrated on March 25, Lady Day, nine months before Christ’s birth. 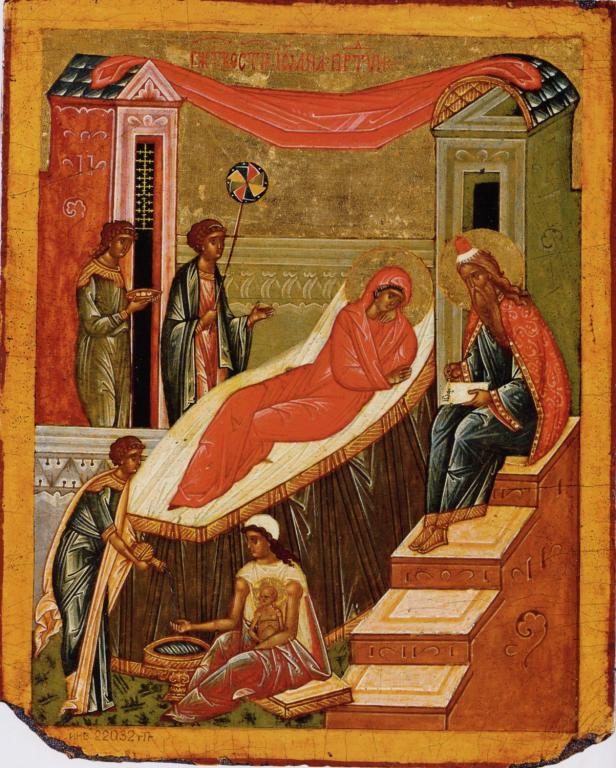 The Birth of John the Baptist (image is in public domain)

As the church expanded into pagan Europe, that Midsummer connection added enormously to popular devotion to John. As the high point of the solar calendar, and the longest day, Midsummer was a widely beloved festival. It was associated with many popular customs and rituals, mainly marked by fire but also by ritual washing in rivers. Bonfires burned to ward off evil forces and defeat witches, while women collected medicinal plants and ferns. The fires became the focus of dancing and leaping, while wheels were rolled to symbolize the sun’s progress. As a day when boundaries between the worlds were thought to be thinnest, it was also a natural time for divination. By the way, this year’s summer solstice falls on June 20 – that is, tomorrow.

I just add one point here. The fine British scholar Ronald Hutton argues that many seemingly pagan customs in Europe are nothing of the sort, and many or most of them are actually derived from medieval or later popular Christian practice. See for instance Hutton’s brilliant Pagan Britain (2013). I treat his views very seriously, although I don’t agree with every word. In the case of Midsummer, I think there is enough evidence of authentic solar-oriented customs and practices predating Christianity. To take one example of many, the seventh century Saint Eligius warned Christians against celebrating solstice-related rituals around the time of the Feast of John the Baptist.

In Christian times, the older customs now became firmly attached to St. John’s Eve, June 23. Among many other survivals, that is why the potent plant became St. John’s Wort, while St. John’s Fires burned on the hillsides. Still in northern Europe, St. John’s Eve remains one of the very greatest moments of the year, paralleled only by Christmas. It has a comparable significance in other regions in Québec, where the linkage to fires and fireworks remains strong. Just as the evening before All Saints (All Hallows) became Halloween, so St. John’s Eve served as a focus for elaborate merry-making, for parades and pageantry.

The church struggled long and hard against other customs that it could neither absorb nor tame. Residual pagan connotations were potent in Russia, where they supplied the foundation for Nikolai Gogol’s 1830 masterpiece “St. John’s Eve.” This phantasmagoric tale describes the bizarre happenings in a small village on that enchanted evening, with all its encounters with witches and demons, and inanimate objects springing to life. Even those who have never read the story have encountered its musical aftermath. Gogol’s tale is the inspiration for Mussorgsky’s tone poem St. John’s Night on the Bare Mountain, which Rimsky-Korsakov reworked under the title Night on the Bare Mountain. This achieved popular fame worldwide through Disney’s Fantasia (and featured as a disco version in Saturday Night Fever).

But the Christian appropriation went far beyond merely lending the saint’s name to familiar peasant customs. This was no mere cynical baptism of pagan habits. The church remembered John’s unique role in declaring Jesus’s mission, and he was often depicted in art with his “lamb and flag” imagery. He is easily recognized by his banner declaring “Behold the Lamb of God,” and he is usually accompanied by a lamb, foretelling Christ’s sacrifice. John became a special prophet of the new Christian dispensation, to be feted accordingly.

Through the Middle Ages, the churches treated St. John’s Nativity as a duplet of Christmas. If it wasn’t for the painful association with the name of Antichrist, it would be tempting to refer to the day as “Anti-Christmas.” It was a day of special vigils and multiple masses, each with its special symbolism. A vigil mass at night suggested John’s role as fore-runner; one in the morning recalled his role as baptizer; a third marked his special sanctity. Relics of St. John were prized as much as those of any saint. To the scandal of the church’s intellectuals, multiple centers claimed the Baptist’s head.

Christians also rejoiced in the day’s older connotations. Like earlier pagans, they were well used to using light and fire as symbols of holiness and truth, as when they lit the Paschal Candle to celebrate Christ’s Resurrection at Easter. They found no embarrassment whatever in lighting bonfires to consecrate the landscape to John, and more especially to Christ, the true Light. They even found scriptural justification for the Midsummer/Midwinter parallel, and its solar context. Had not the John of the New Testament proclaimed that “He must increase, and I must decrease”?

So rich is the imagery that it is surprising that St. John’s Day is not better known among Western churches, even among liturgically-oriented communities. Why don’t churches have Midsummer fires?

I am adapting an older column I did for RealClearReligion.

June 22, 2020 Enough Learning to Last Until the End of My Life
Recent Comments
0 | Leave a Comment
Browse Our Archives
get the latest from
Anxious Bench
Sign up for our newsletter
POPULAR AT PATHEOS Evangelical
1