“Whether the fact is admitted or not,” Don Dayton began his most-read work, “most books arise out of the author’s personal history.” Discovering an Evangelical Heritage was “no exception.” Don, who passed away earlier this year, grew up in Wesleyan churches and went to college at Houghton, but he was disillusioned by evangelicals’ reactions to desegregation and the Vietnam War. Becoming involved with the civil rights movement, whose “principles of fundamental human equality seemed not only more right, but more biblical and Christian than the positions taken by our elders,” led him to recognize that the evangelicalism of his upbringing had often called “biblical” what was actually “the deification of cultural patterns not only relative but in some cases even pernicious and demonic.” 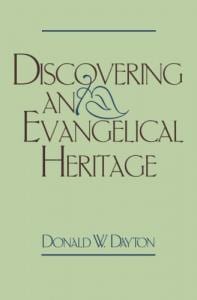 But his graduate studies in the history of 19th century evangelicalism prompted him “to rethink, not only my relationship to Evangelicalism, but the broader significance of that movement in American culture.” As he read about abolitionists, feminists, educators, and social reformers, Don decided that he “had been struggling with the wrong end of Evangelical currents that had once reverberated with vitality and reform activity, but had over the course of a century fallen into a form of decadence.”

Originally published as essays for the magazine that became Sojourners, Discovering an Evangelical Heritage became a kind of sensation when it came out in 1976. When the book was reissued twelve years later, Don was still “astonished” by its reception, and touched that his own story of “pilgrimage and struggle” was similar to his readers’. As I saw again and again on social media after Don’s death, his historical survey had helped Christians “resolve questions of identity and evangelical commitment.”

I came to his book many years later, but Don did help me discover my own evangelical heritage. Not only did I find an evangelicalism that valued both evangelism and social action, but one that drew from Wesleyan, Holiness, Pentecostal, and (yes) Pietist sources at least as much as the Reformed traditions that other scholars tended to emphasize.

It was a heritage I needed to encounter as I arrived at Bethel in the early 2000s, unsure what to make of my first encounter with evangelical higher education and a bit shell-shocked by aspects of my experience with evangelicalism beyond the Midwest. Especially as I got to know colleagues like G.W. Carlson and Christian Collins Winn (a student of Don’s who wrote a tribute in Christianity Today), I realized that I had stumbled into an evangelical community whose heritage “reverberated with vitality and reform activity.”

At this point in the Age of Trump, there’s a part of me that just wants to crawl back into Discovering an Evangelical Heritage and tell myself that that evangelicalism will someday, somehow return.

But perhaps, to flip Don’s phrasing, that would leave me focused on the wrong end of evangelical currents. Perhaps the religious heritage I need to discover right now is the decadent, anti-reformist one I’ve always tried to keep at a distance: the one marked by the militant masculinity that Kristin documents in her new book.

I’ll touch on its thesis and themes as I go, but if you’re not already familiar with Jesus and John Wayne, let me encourage you first to get up to speed by reading Kristin’s explanation of its back story (here) or her recent interview with Vox. That gives me some space to add some autobiographical context that will help explain my response…

To paraphrase Don once more, the reading of most books is tied to one’s personal history. It certainly is if you’re an evangelical reading a book about evangelicalism. For my part, that meant that Kristin’s coverage of the 1990s hit particularly close to home.

In 1993, my family moved from Minnesota to Virginia. I went to college on one side of the commonwealth; my dad took a job on the other side of it. The experience of living there introduced me to several culture warriors who figure prominently in Kristin’s book:

Now, jarring as it was to encounter such combative forms of Christian witness, the post-Cold War Nineties were actually a time when Kristin found that militant masculinity was relatively muted in American evangelicalism. (In the absence of Communism, it wasn’t quite as clear from whom or what evangelical men were protecting their wives and children.) One night in our African American religion class, a fellow student invited me to a Promise Keepers rally. He wanted Christian men to do a better job of fulfilling their God-given roles. It was my introduction to what Kristin calls the “soft patriarchy” of an organization that avoided Religious Right partisanship but still affirmed men’s traditional authority.

Apart from those memories, however, my life can seem to have been spent in evangelical cultures that don’t support Kristin’s thesis about militant masculinity. My parents may have read James Dobson and voted for Ronald Reagan, but I grew up in a matriarchal society, where my mother (like her mother and grandmother before her) was evidently a self-reliant leader in no need of protection from my father (who loves In Harm’s Way, but is nothing like John Wayne). I vaguely remember someone putting American Family Council material on a church bulletin board, but I grew up in the 1980s and don’t remember a single sermon about politics or culture wars. And I hadn’t heard the phrases “Purity Culture” or “Proverbs 31 Woman” until 2003. That’s when I came to Bethel, an Upper Midwestern outpost of the “establishment evangelicalism” that some of Kristin’s dramatis personae disdain — and perhaps also the Pietist institution that I’d like it to be, known for an “irenic spirit” that would be anathema to conservative evangelicals like Douglas Wilson, Mark Driscoll, and Franklin Graham.

In that sense, there doesn’t seem to be much of an evangelical heritage for me to discover in Jesus and John Wayne.

But here’s the thing: I’m the exception here, not Franklin Graham or Jerry Falwell (Jr., these days). Me, not the evangelicals who emulate Braveheart, read Jordan Peterson, buy gender-specific merchandise in Hobby Lobby, watch Fox News, and vote for Donald Trump.

For in terms of what the word evangelical means to almost anyone living in 21st century America, I’m persuaded that Kristin is right: evangelicals are people who participate in a religious “culture of consumption” pervaded by a mix of patriarchy, militarism, and Christian nationalism.

By those standards, I’m no evangelical. I may be a biblicist, crucicentrist, conversionist, and activist Protestant who believes in miracles like the virgin birth and bodily resurrection, but my convictions about gender roles, America’s role, or any number of other issues put me out of step with the vast majority of other white American evangelicals. I may write for an evangelical blog channel and teach at an evangelical university, but whatever influence I wield is dwarfed by that of authors and bloggers, radio hosts and podcasters, televangelists and social media influencers whose views would confuse or anger me… if I paid closer attention to them.

But here’s the thing, part two: in the evangelical circles in which I’ve moved, I have the privilege of keeping such messages at arm’s length. I can find militant masculinity un-Christlike and unbiblical, but I can easily avoid it. 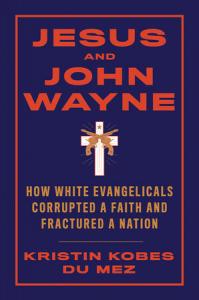 Among its many other benefits, Kristin’s book made me realize how untrue that is for millions of evangelical women.

I could leave behind the brand of evangelicalism I encountered in my college days. Many others don’t have that choice. As it moved me from memory to empathy, Jesus and John Wayne made me think of my relatives still recovering from the traumatic experience of growing up in Independent Baptist churches. And of colleagues who receive negative teaching evaluations because they don’t match expectations that descend from books like Marabel Morgan’s Total Woman. Of students who have been raised to ignore God’s calling and squander God’s gifting, all for the sake of “biblical womanhood.”

Like Josh Parks, one of Kristin’s student researchers, “I could read these stories and feel horrified without feeling personally attacked or endangered… For those of us who have never been on the blunt end of sexism (or racism, or ableism, etc.), things can look funny or tragic or intriguingly disgusting when they are actually evil. Which means we need to trust the thoughts and feelings of others more than we trust our own. If anyone’s deceived by their own emotions, it’s us.”

I still feel like there’s an evangelicalism spanning eras and cultures that links me to Don Dayton’s reformers. But that emotion can deceive me. Here and now, it’s clearly less important that I find a heritage that comforts this evangelical than that I understand the heritage that has afflicted so many others.

July 15, 2020 The Spiritual Danger of Monuments
Recent Comments
0 | Leave a Comment
"Good point!"
mmcguire001 Advent: The Most Apocalyptic Time of ..."
"Always appreciated the tension of Advent. Fleming Rutledge is, in my opinion, one of the ..."
mmcguire001 Advent: The Most Apocalyptic Time of ..."
"Hey Mike, The political Religious Right must cut huge sections out of their Bible in ..."
Artistree Ron Sider and the Fate of ..."
"I think people are being very thin skinned about an opinion of one person. But ..."
Roger McKinney A Panopticon for a Ruling Class ..."
Browse Our Archives
Related posts from Anxious Bench