Saving the Good Wine Until Last

Critic Colin Manlove once listed the three main writers of “Christian fantasy” during the twentieth century as C. S. Lewis, Charles Williams, and T. F. Powys – that is, Theodore Francis Powys (1875-1953). Particularly for Americans, that last name might seem surprising, but I want to show that he fully belongs at the top table. He really was that good.

The years between the two World Wars produced an amazing efflorescence of religious writing in the British Isles, in both prose and poetry. Besides Lewis and Williams, we think of Dorothy Sayers, J. R. R. Tolkien, T. S. Eliot, the later G. K. Chesterton, and (a favorite of mine) Neil Gunn. Many such writers made rich use of fantasy and allegory as a means of exploring profound spiritual matters. In this august company, we find T. F. Powys, who in 1927 published a dazzling classic called Mr. Weston’s Good Wine.

Powys came from an amazing family, with multiple highly creative siblings. I would place his brother John Cowper Powys in the very first rank of the writers of the twentieth century, in any language, and plenty of others share that opinion. That view may be less fashionable than it was a few years ago, but there we go: the taste for high Modernism comes and goes. It was while fanatically reading my way through all J. C. Powys’s lengthy novels in the mid-1970s (Good grief, so long ago!) that I discovered his brother Theodore, of whom I now write.

T. F. Powys himself was an arch-countryman who loved a quiet and even boring life. And then came Mr. Weston’s Good Wine. (In 1931 came the even weirder Unclay, but I will leave that for another post). In his life, his writings were not well known, but Borges was a huge fan. In 2011, the TLS did an essay on him under the powerful title, “An English Tolstoy,” and the analogy was meant very seriously. The Powys Society has a great piece on him here. If not an orthodox believer, he was saturated in the Bible, and John Bunyan was a huge influence on his work.

Mr. Weston is a very readable allegory. A prosperous wine merchant wanders the English countryside in his expensive car. As we discover very early, Mr. Weston is in fact God, a genial and humorous individual with powers of fancy or imagination that allow him to recreate the world as he chooses:

He possessed in a very large degree a poet’s fancy, that will at any moment create out of the imagination a new world. Mr. Weston had once written a prose poem that he had divided into many books, and was naturally surprised when he discovered that the very persons and places that he had but seen in fancy had a real existence in fact.

Detail of Stanley Spencer, The Cookham Resurrection (1924-27), Tate Gallery, London: photograph is my own work.

He is accompanied by his faithful servant Michael. Michael’s identity is made clear in a passage that gives a sense of the book’s really funny quality:

This gentleman had risen to high distinction in the firm, having once, by his strength and courage, quelled a mutiny that arose amongst the workers in Mr. Weston’s bottling department–a mutiny that, had it been successful, would have entirely ruined the wine merchant’s vast business, whose ramifications were everywhere.

Yes, that is the War in Heaven as a stroppy labor dispute in the bottling department.

We learn a lot about the inner workings of Mr Weston’s firm – let’s call it his business model. Just how does he market and sell his product? He generally steers clear of churches:

‘I only like to go,’ remarked Mr. Weston, ‘where my good wine is drunk. In a condemned cell, in a brothel, in the kennels of a vast city, our wine is drunk to the dregs, but in a church they merely sip.’

‘And yet we have had orders,’ said Michael.

‘And if we fulfil them,’ replied Mr. Weston, ‘have the buyers ever been known to pay?’

‘Why, no,’ said Michael, ‘they expect all goods to be given to them.’

‘They won’t get much from us, then,’ said Mr. Weston grimly.

And yet for all the playfulness, we never forget Mr. Weston’s fundamental reality. As a voice speaks in  his presence, “I form the light, and create darkness. I make peace, and create evil: I, the Lord, do all these things.”

On this occasion, Mr. Weston has come to visit the microcosm of the world that is the village of Folly Down. Michael digs out the firm’s business ledger, and Mr. Weston reads the names before him in his Book. Who among the local people will buy his good wine? Time stands still, in a foretaste of the day of judgment. The people of the village find that God has suddenly entered into their midst: he is examining their hearts, and guiding their ways. Heaven, suddenly, is in this place.

Before I say more, I should explain my illustrations here. Coincidentally, 1927 also marked the first exhibition of Stanley Spencer’s huge painting The Resurrection, Cookham, which depicts Resurrection Day as it affected his local parish church, with his friends and relatives rising from the grave. That also in its way marked a remarkable moment in British religious art. In showing the explosive intrusion of the divine into a very ordinary rural England, the painting exactly reflects the mood of Mr. Weston. The Penguin Modern Classics version of the book actually uses as its cover another Spencer painting, A Village in Heaven. 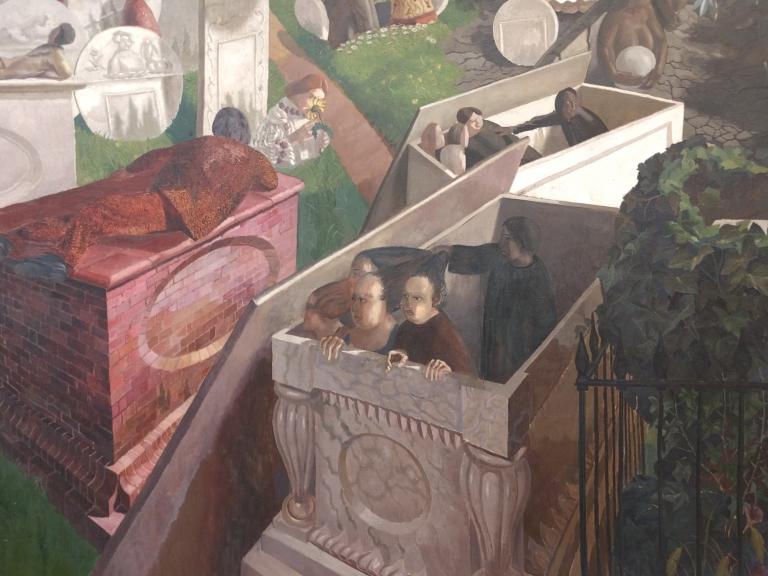 Detail of The Cookham Resurrection: photograph is my own work.

I won’t go through every part of the book’s plot, or anything like it, but I will just say that Mr. Weston deals with several potential customers, who are invited to choose salvation – I’m sorry, I mean to buy his fine wine. A typical hard case is the parish priest, Nicholas Grobe, the only man in the village who does not believe in God, because of the tragic death of his wife, Alice. Yet while rejecting God’s existence, Grobe is passionately preaching a human and suffering Jesus. His daughter Tamar is just as obsessed by a vision she once had of an angel, glimpsed in the sign of the Angel pub.

During the course of Mr. Weston’s business visit, Tamar will indeed meet and marry a real angel, namely Michael. Parson Grobe will also take the wine, but when he sets it down, it mysteriously turns out to be the Bible. He will eventually accept the dark wine that will allow him to meet his wife again, the wine of Death.

The righteous are vindicated. The sinners and exploiters too will find their fate, as they encounter the lion, for Mr. Weston always travels with his lion.

At many points, the dialogue and the action will sound strange and unworldly. What are we to make of Luke Bird, who believes that only animals have souls, so that he preaches the Christian truth only to them? But it always pays to remember that when we read the book, we are in a dream, or a nightmare, much like Chesterton’s The Man Who Was Thursday, and different rules apply to dreams. Perhaps we are in a new dream of Mr Weston’s. Just look at the title, which comes from a line of Jane Austen’s Emma: “She believed he had been drinking too much of Mr. Weston’s good wine, and felt sure that he would want to be talking nonsense.” So of course it looks like we are talking nonsense.

I don’t mean to give the impression that the book is cuddly and pious. Much of the work tells the story of the village in the years leading up to that one critical night, and the picture it gives of local hatreds and jealousies is often grim. The sexual material is surprisingly frank, including rape themes, all treated very seriously. Obviously, the book’s gender attitudes are nothing like what might be expected in a book from 2020, but the gender politics of Folly Down often strike a modern chord. The systematic sexual exploitation of the poor by the local rich is a core theme, to the point of being compared to the ancient human sacrifices of pagan times. Powys stresses the deception to which the poor are constantly subjected. Some of the characters are so outright evil as to make you think occasionally that you are reading a kind of rural Gothic piece, an early example of Folk Horror. This all sets the scene for the divine visitation. 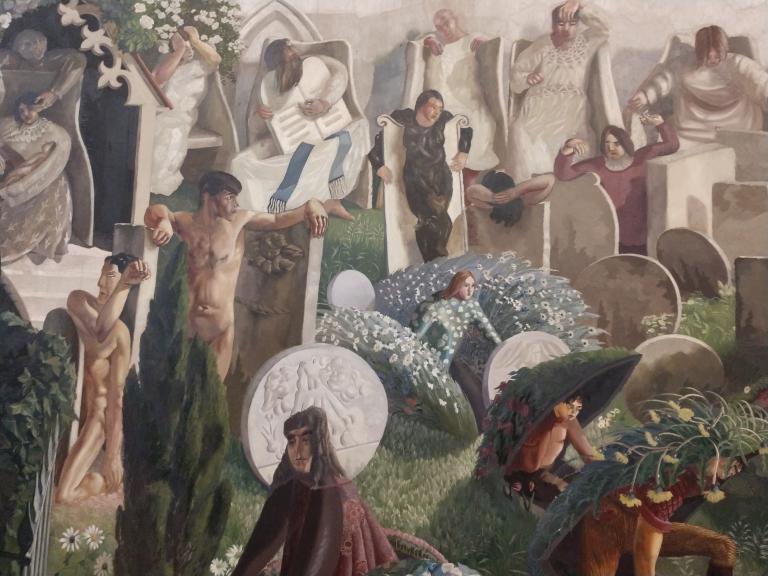 Detail of The Cookham Resurrection: photograph is my own work.

But the message is one of hope. As one of the village’s perpetual victims declares,

‘Phoebe and I care nothing for your lion,’ she said. ‘Since that man spoke to us of his wine, and we believed him, we have lost our fears, for he said, “If you drink my good wine, nothing shall hurt nor destroy you.”‘