Generosity for Our Own Good

Today we welcome Abram Van Engen to the Anxious Bench. Van Engen is Associate Professor of English at Washington University in St. Louis and the author of Sympathetic Puritans and City on a Hill (see the Anxious Bench Q&A here). In today’s guest post, he reviews Alan Jacobs’s Breaking Bread with the Dead: A Reader’s Guide to a More Tranquil Mind. Seems that’s precisely what many of us need in 2020.

In 1931, the president of the American Historical Association, Carl Becker, declared that all people are historians. If history is “the memory of things said and done,” he said, then everyone does history every day. We turn to memory to find our way in the present and see our way to the future.  “To be oriented in our little world of endeavor we must be prepared for what is coming to us,” Becker said. “And to be prepared for what is coming to us it is necessary, not only to recall certain past events, but to anticipate (note I do not say predict) the future.” What Becker wanted to emphasize was the continuity between the uses of personal memory (what everyone does) and the uses of cultural memory (what professional historians do). In both cases, memory serves a purpose. History is useful to us because, quite simply, it is constantly in use.

I have long loved Becker’s address because I think it lays bare the essential importance of history. But it also raises some lingering problems. What prevents us from doing bad history—from treating the past however we want, or seeking whatever we please and leaving the rest to rot? How, in short, does the past speak back? 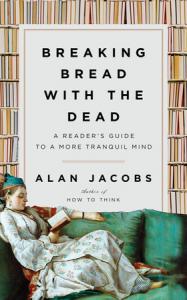 These are some of the questions Alan Jacobs considers in Breaking Bread with the Dead. According to Jacobs, we all too often read all too narrowly: a common attitude sees “all history hitherto” as “at best a sewer of racism, sexism, homophobia, and general social injustice, at worst an abattoir which no reasonable person would even want to peek at.” He wrote Breaking Bread with the Dead to argue “for an account of the past that emphasizes its treasures more than its threats.”

At the same time, Jacobs recognizes the threats. Unlike some attempts to shore up old texts, Jacobs does not claim that we should leave ourselves or our moral judgments behind when we read. Instead, he argues that we are not bringing enough of ourselves to the judgments we make. The quick dismissals of past texts, Jacobs says, are acts of triage we make in an age overloaded with information. These days, we need shortcuts. We make quick decisions. We sort and set aside without fully weighing all we read. And in doing so, Jacobs says, we end up “highly selective in what elements of a historical person’s character we are willing to take seriously.” If we can call something sexist and be done with it, it saves a great deal of time.

This is where the title of Jacobs’ book does so much work. “Art is the chief means of breaking bread with the dead,” W.H. Auden once wrote. And that is the basic model Jacobs proposes: “sitting at table with our ancestors and learning to know them in their difference from, as well as their likeness to, us.”

A nice image, surely, but why should we bother?

Very slyly, Jacobs claims that this model offers us benefits we have not yet known. In becoming “uncharitable to our ancestors,” Jacobs argues, we mostly become uncharitable “to ourselves,” depriving ourselves of perspective, limiting what we can know and how we can grow. The problem, he claims, is that “we live thinly in our instant, and don’t know what we don’t know.” When we treat the past with a quick dismissal, we do harm too ourselves, not to the past itself. In the end, Jacobs argues, it is in our own self-interest to be much more generous—to condemn where condemnation is called for, yes, but at the same time to listen and learn, even perhaps from those we have in some circumstances condemned.

In asking us to look for both difference and likeness, Jacobs proposes that this model can help us achieve what he calls “personal density,” an ability to experience life beyond “just managing the moment.” The description Jacobs offers never fully comes clear, but it makes me think of a speech I have often taught. Every year, the University of Chicago greets its first-year students with an hour-long oration called “The Aims of Education.” In 2002, Andrew Abbot, a sociologist, was tapped to deliver the address. He began with a series of numbers that showed just how little it mattered what these students studied or how well they studied it at U of C. No matter what career they sought or how much money they hoped to earn, the fact of getting into U of C and graduating from it would do the trick. So why should they bother to study?

Abbott’s answer matches Jacobs’ almost exactly. Defining education as “the ability to make more and more complex, more and more profound and extensive, the meanings that we attach to events and phenomena,” Abbott called education an end unto itself, not a means to some other end. Then he offered this example: suppose you and I stand before a painting for five minutes, but you are an art historian and I am not. During those same five minutes, you will see and experience far more. “The experience becomes ‘bigger’ because you are educated,” Abbott explains. “Not merely in the sense that you can look at the painting longer without being bored, but also in that within a single look you will see more.” That’s how education works. Without extending time, the present expands. That, in a nutshell, seems to be what Jacobs has in mind.

I find Alan Jacobs largely persuasive, though I will admit that on this point I am easily persuaded. So I wonder what Jacobs would say to a harsher critic—to someone worried that most people are not good readers, and to re-read the racism, sexism, and other sins of the past is quite possibly to imbibe them, to find them satisfying, to replicate them in the present. That is why the threats, not the treasures, must be named. Such a fear fits with a general sense these days that words are power. They act on us and others. And to respect—or even just to read—the wrong words is do real harm, real violence, right now, either to ourselves or to someone else. On that point, I am curious how Jacobs would respond.

Whatever response he might offer, I am sure it would take a similar form. The argument in Breaking Bread with the Dead does not build on a series of bullet points. Instead, chapters meander thoughtfully through various books and examples. Instead of a legal brief, Jacobs offers us exactly what the book hopes to nurture: a meal. We sit down at table with a seasoned teacher, listening to what he has read and learned along the way. In that sense, the form of Jacobs’ book does as much as its content to back its point. We watch him breaking bread with the dead, and we begin to see why the feast is worth it. 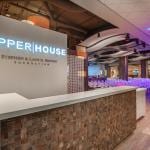