There are so many good reasons to read Esau McCaulley’s Reading While Black that I fear that mine will sound trivial: it took me beyond the religious categories whose boundaries we regularly debate here at Anxious Bench, and suggests how Black Christians can teach white Christians of all theological stripes to read the Bible with fuller insight, greater patience, and more enduring hope. 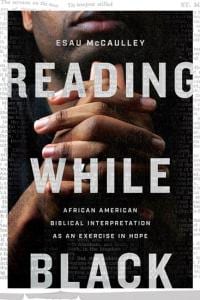 Early in the autobiographical introduction, McCaulley remembers walking into a college Bible class, where he “unknowingly entered the hundred years’ war between white evangelicals and white mainline Protestants.” While he could find something true on each side of that conflict, he ultimately felt like “a casualty of someone else’s war.” He knew the harm that fundamentalism had inflicted, but soon realized that “if the Scriptures were fundamentally flawed and largely useless apart from mainline revision of the text, then Christianity is truly a white man’s religion.” On the other hand, while McCaulley found himself “at home with much of the theology in evangelicalism” (enough to take a faculty position at Wheaton College), he soon discovered two add-ons to the Bebbington Quadrilateral: “a general agreement on a certain reading of American history that downplayed injustice and a gentleman’s agreement to remain largely silent on current issues of racism and systemic injustice.”

McCaulley is also an Anglican priest, but what he describes is more than a via media carefully skirting the Scylla of modernism and the Charybidis of fundamentalism. The Black Christian way of reading the Bible is not a middle path, but a distinct tradition born in the middle of oppression. Consider McCaulley’s reading of the Magnificat, Mary’s song near the beginning of the Gospel of Luke…

First, theological liberals should come to Luke’s account of Jesus’ conception and recognize that “if Black biblical interpretation is to be free to chart its own path, it is also free to reject the thoroughgoing skepticism that stands as one legacy of the European dominance of biblical studies. Behind the skepticism about the virgin birth lies a whole tradition of skepticism about the nature of God’s involvement in human affairs.” At the same time, conservative evangelicals shouldn’t downplay the equally astonishing social implications of that same young woman praising a God who “has brought down the powerful from their thrones and lifted up the lowly… Is this not the hope of every Black Christian, that God might hear and save? That he might look upon those who deny us loans for houses or charge exorbitant interest rates in order to cordon us off into little pockets of poverty and say to them your oppression has been met with the advent of God?”

(Or as McCaulley explains in an earlier attempt to sketch a theology of policing, that same God reigns sovereign over those forces of “law and order” given “the sword” in Romans 13, a passage that white evangelicals have selectively invoked in recent years — often since 2017, not so much in the eight years prior.)

The Black Christian tradition of biblical interpretation starts with the claim “that God is fundamentally a liberator,” one who brings about more than the partial freedoms that white conservatives or progressives tend to emphasize:

Alongside the story of the God of the exodus is the God of Leviticus, who calls his people to a holiness of life. The formerly enslaved managed to celebrate both their physical liberation and their spiritual transformation, which came as a result of their encounter with the God of the Old and New Testaments.

It certainly feels transformative to encounter those texts with McCaulley as our guide. To back up in Luke 1 just a bit, to the conception and birth of John the Baptist…. While I reflected on that passage in the devotional that came out this week, it never occurred to me to think of John’s parents as “the first generation of Black Christians who came to faith during slavery,” or how “God’s decision to visit Zechariah and Elizabeth and Luke’s decision to begin his story here are in themselves vindications of Black faithfulness because we too know the longing for consolation.” For white evangelicals like me, Zechariah’s “dawn from on high” too rarely sheds light on anything but spiritual darkness.

Since African American Christians have “never had the luxury of separating our faith from political action,” their experience of politics has always shaped their interpretation. (“Everybody has been reading the Bible from their locations, but we are honest about it.”) But McCaulley also understands that “the dialogue goes both ways. If our experiences pose particular and unique questions to the Scriptures, then the Scriptures also pose unique questions to us.” For example, “the historic and ongoing oppression of Black people” in America makes the biblical theme of forgiveness “both a boon and a trial.”

(I was reading McCaulley’s book last week in part to prepare for this week’s survey of African American religion in our first-year church history course. So when I asked my students to read AME Church founder Richard Allen’s 1794 letter “To those who keep slaves, and approve the practice,” I had them focus on how he wrestled with his sense of obligation to love his enemies, to “forgive you, as we wish to be forgiven….”)

So while McCaulley’s approach to biblical interpretation is an exercise in hope, it is also an exercise in perseverance, one in which we “adopt the posture of Jacob and refuse to let go of the text until it blesses us.” This “hermeneutic of trust” takes time and demands humility, but brings us into “a patient dialogue trusting that the fruit of such a discussion is good for our souls.”

December 2, 2020 The South’s Poor Whites Are Still a Forgotten People
Recent Comments
0 | Leave a Comment
"Thanks for these observations. Adventists are definitely not persecuted. Mostly because the draft isn't in ..."
Lisa Clark Diller Hopeful Apocalypse
"This is a very informative post. check this okbet ph"
thaomas Signs, Wonders, and the Making of ..."
"This is an interesting list of examples showing that humans throughout history are incredibly superstitious ..."
Jeff Bingham Signs, Wonders, and the Making of ..."
"Looking hard at the documented evidence for ancient societies, I find no examples suggesting anything ..."
philipjenkins Show Them No Mercy: The Bible ..."
Browse Our Archives
Related posts from Anxious Bench