John Robinson, pastor of the English separatist congregation in Leiden that partly transplanted itself to Plymouth Colony, observed a distinction between “an outward baptism by water, and an inward baptism by the Spirit.” Although they “ought not to be severed,” they often were. Although baptism even into a false church was “a spiritual ordinance,” its “spiritual uses cannot be had without repentance.” Only then were men and women washed of their sins and made fit for salvation.[1]

I thought of Robinson’s comments when reading Baird Tipson’s Inward Baptism: The Theological Origins of Evangelicalism. Tipson maintains that evangelical understandings of conversion flowed logically out of the insistence of Luther and Calvin that God and only God saved human beings:

evangelicalism emerged because Luther made a recipient’s faith a condition for his or her efficacious reception of a sacrament, because theologians such as Beza granted explicit priority to inward over outward baptism and urged Christians to look for ‘motions’ of the Holy Spirit in their hearts, because William Perkins and his followers identified the conscience as the primary locus of those motions, and even because later seventeenth-century Christians experimented with reducing Christianity to morality.

The latter point is critical to the story. The reduction of Christianity to “godly walking” – which Douglas Winiarski foregrounds in his Darkness Falls on the Land of Light – prompted a vigorous reaction from theologians who returned to a strict insistence on the divine initiative in salvation. How could humans know that God had saved them? John Wesley, George Whitefield, and Jonathan Edwards taught that men and women could not only look to traditional marks of conversion (such as conviction of sin and the fruits of repentance) but could perceive the work of God’s Spirit within their souls. As Edwards put it in his Religious Affections, “the saint sees and feels plainly the union between his soul and God; it is so strong and lively that he can’t doubt of it. And hence he is assured that he is a child [of God].” Christians possessed a spiritual, supernatural sense alongside their five physical senses, a spiritual sense inaccessible to individuals who had not experienced conversion.

Tipson does not seek to explain why the awakenings and revivals of the 1730s and 1740s began when and where they did. He cites Gordon Rupp’s sensible conclusion that “the causes of the Evangelical Revival will always be mysterious and disputable.” Pietist movements on the continent provided precedent and inspiration, as did meetings in northern Ireland after the Restoration. Winiarski sees the awakenings as a clear and damaging rupture with well-established patterns of New England Congregationalism, whereas Tipson sees clear continuity with puritan understandings of conversion. Regardless of their proximate social, political, and ecclesiastical causes, though, Tipson contends that evangelicalism was a theological inevitability flowing out of the Reformation. “While Puritanism and evangelicalism are hardly identical,” Tipson comments, “it seems clear to me that the Puritan insistence on inward baptism paved the way for later evangelicalism.” Tipson contends that if you “start with conscience religion and replace the voice of God in conscience with the immediate inspiration of the Holy Spirit,” you get evangelicalism.

What is important here is the larger theological and ecclesiastical story, of a shift away from the 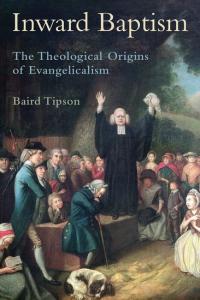 “importance of a professional clergy and the reliance on official sanctioned liturgies” and sacraments. Restoration Anglicans had reaffirmed “strict adherence to the liturgies of the prayer book,” whereas evangelicals further developed the puritan skepticism of set prayers. This completed a shift from medieval, Catholic sacerdotalism to the more subjective, individual faith of Protestant evangelicalism, a faith often kindled in churches to be sure, but one that might be sparked by lay exhorters in the fields or the marketplace.

I am a bit skeptical about the idea that evangelicalism was a theological inevitability. As Tipson contended in his Hartford Puritanism, both Luther and Calvin found inspiration in what Perry Miller would famously term “The Augustinian Strain of Piety.” I don’t think many of us would want to say Augustine’s teachings about the will made eighteenth-century trans-Atlantic evangelicalism inevitable, or that the latter is a logical outgrowth of the former. In other words, the longer the distance between two theological moments, the more difficult it is to make claims about inevitability or logical outgrowth. Tipson is careful to say that evangelicalism was one logical outgrowth, hardly the only one, of the Protestant Reformation.

What I most appreciate about Inward Baptism, though, is Tipson’s ability to concisely and lucidly explain several hundred years of theological developments. He has a talent for making complex ideas and debates digestible, as his chapters on Luther, Beza, and Perkins demonstrate. Few historians of Christianity take the time to trace the longer histories of the ideas they discuss. There is much to be gained from putting eighteenth-century evangelicalism in conversation not only with English puritanism, but with pre-Reformation teachings about conversion.

December 4, 2020
Strange Rites, Harry Potter, and the New World of Cults
Next Post

December 7, 2020 QAnon, Cults, and Religion Online
Recent Comments
0 | Leave a Comment
"Never heard of Kuyper before today. I don't think. Timely article. It seems that no ..."
Gene jones Josh Hawley, Betsy DeVos, and Abraham ..."
"Yawn"
odgie America’s Invisible Churches
"Yup. Good question. I would not reduce the question to recent presidential politics, but I ..."
John Turner The Evangelicalism I Love
"It should be child abuse to teach religion to children. If 20 year olds can't ..."
Christian America’s Invisible Churches
Browse Our Archives
get the latest from
Anxious Bench
Sign up for our newsletter
POPULAR AT PATHEOS Evangelical
1