Last time I wrote about Tara Isabella Burton’s recent book Strange Rites: New Religions for a Godless World. In particular, I argued that she solved a great contemporary mystery, namely why today we no longer have the “cults” that were such a marked feature of virtually all previous eras of American history. Basically, the impulses that would once have inspired such movements had gone online, and are manifested in the form of virtual communities which might or might not recognize themselves as overtly religious. They behaved and acted like sects and cults. Today, I offer one specific act of such an online movement that really has become a cult, and what that tells us about the limitations of research and investigation.

Here is my case in point.  You have probably heard with some bemusement of QAnon, a hugely popular conspiracy theory that imagines elite Satanic pedophiles ruling the nation, and the resistance movement against them led by Donald Trump. The theory is almost infinitely expandable, as it absorbs each new event or manifestation into its comprehensive mythology. Do read the Wikpedia entry: it is mind-stretching.

The idea first appeared online as recently as 2017, and it is very much an online phenomenon. It has however had manifestations IRL, driving activists to mobilize directly against these sinister forces. That includes making death threats against QAnon’s enemies. I and many others expect QAnon to enjoy a boom in the coming years, especially among far Right militants. QAnon believers have won Congressional races.

In its assumptions and demonology, QAnon is very much a cultish thing with overwhelming religious qualities. It has precise parallels to the Satanic Panic that galvanized so many evangelicals a generation ago. QAnon believers reach out enthusiastically to conservative Christians, and the movement has its own distinctive ways of reading the Bible. Marc-André Argentino has written on the idea of “The Church of QAnon: Will conspiracy theories form the basis of a new religious movement?”

Now read Clive Thompson’s eye-opening article in the October WIRED, “QAnon Is Like a Game—a Most Dangerous Game.” I won’t replicate it in detail here, but the main point is that QAnon looks exceedingly like a multiplatform online game, a MMORPG (massively multiplayer online role-playing game). Even more specifically,

QAnon was behaving precisely like an alternate-reality game, or ARG. ARGs are designed to be clue-cracking, multiplatform scavenger hunts. They’re often used as a promotion, like for a movie. A studio plants a cryptic clue in the world around us. If you notice it and Google it, it leads to hundreds more clues that the gamemaker has craftily embedded in various websites, online videos, maps, and even voice message boxes. … game dynamics help explain why QAnon is such a seductive conspiracy. It plugs into the psychological lures that make ARGs so fun.

First off, QAnon poses a mystery that feels so big it can only be solved by crowdsourcing … There’s also the thrill of creativity, of adding to a canon. … Q’s followers behave like religious devotees who pore over their faith’s central texts, crafting interpretations that become part of the official creed. And, like an ARG, QAnon brings social rewards. If you’re the first to post a new discovery, “other people can see it, and they instantly recognize it,”

You also have a wonderful sense of shared values and knowledge that separates you from the common herd. When you see a reference to the Storm, you smile grimly at what YOU know, and THEY don’t. You know how to follow the breadcrumbs. THEY don’t even understand what WE mean when we declare that WWG1WGA (Translation: Where we go one, we go all).

In words that could easily have come from Burton, Thompson observes, “In a way, ARGs and QAnon are the quintessence of internet culture.”

Reading that article (and others on the topic), I was left with an open question. Does QAnon look exactly like an ARG through some kind of convergent evolution; or did somebody actually design it as a game, and then let it spill into the real world? I return to the discussion in a recent blogpost of mine at this site about how fiction-writers and entertainers become the founders of new sects, religions – and cults.

Either way, QAnon is one of the main “cults” of our age, and it has absolutely nothing to do with older ideas of what that term constituted.

Just as a mental exercise, imagine if QAnon was an actual old-style real-world cult, with its leaders and its tens of thousands of members, constantly evangelizing in streets and schools, constantly threatening to draw in your children, your family members. And of course, it would have its defensive paramilitary arm, uniformed and well armed. Let’s call them Storm troopers. It would be utterly terrifying.

None of those features applies. But we do live in an alarming world where Internet-driven activism can send very literal groups or individuals to the homes of people who are targeted, to confront them in public places, and to threaten direct violence or harm. Look  at the diet of Internet-fueled conspiracy mania that inspired some recent mass killers, like the villain who attacked the Pittsburgh synagogue in 2018.

And if it is not yet on anything like that scale, such real world direct action is at least as much the work of Left groups as of a far-Right sect like QAnon. Through the Trump years, Left/Liberal conspiracy theories ran quite as rampant as QAnon, with a fully parallel range of internal incentives and rewards, and a similarly grandiloquent vision of oppression and resistance.

This all has serious methodological implications for anyone wanting to track alternative religions. Just think through how we actually knew about these various marginal or fringe religious groups, and what resources were available for anyone wishing to discuss them. Think of the situation faced by a scholar in 1990, say, with one today.

Thirty or forty years ago, these groups had physical headquarters, with mailing addresses and staffs. In some cases, these places were imposing or even frightening think “cult compound.” Movements published literature under their own name, or, commonly, under the name of a thinly disguised front group, which was easily enough penetrated. Groups had visible leaders, some aggressively public or outspoken, others more discreet and publicity-shy: “reclusive” was the common term. Either way, they gave the group a recognizable face: there was someone to understand, investigate, and often, to hate.  Think “cult” and what comes to mind? It’s usually a face or an individual: Jim Jones, David Koresh, Charles Manson, or Bhagwan Shri Rajneesh, or Japan’s Shoko Asahara (of Aum Shinrikyo notoriety).

There were actual groups of members who met face to face, perhaps who actually lived in some common or shared property. They did things together, whether that was physical work or street evangelism. You actually saw them doing things, and maybe you found those activities intriguing, or infuriating. Some groups wore actual uniforms, or at least dressed and wore their hair in very distinctive ways. You saw them at street corners or airports.

When some left or defected, as a few invariably did, there were “apostates” aplenty to expose their experiences and fuel journalistic investigations and headlines. When those involved sexual exploitation or threats of violence, the news cameras and documentary makers were ready to roll: there assuredly would be film at eleven. The exposé books would follow, and you found them on the True Crime shelves of your local bookstore. Younger readers should consult Wikipedia to discover what a “bookstore” was. Also “film at eleven.”

Based on these various observations, substantial bodies of scholarly literature discussed how individuals were attracted to these groups, how they were recruited and/or converted, how and why some defected and some remained loyal.

Now compare those modern online “sects.” I won’t go point by point here, but none of the above apply. A “sect” may have a million adherents, but they are not “members” in anything like the traditional sense, nor are there leaders, nor headquarters, nor places, and precious few apostates or defectors … How, for heaven’s sake, do you study a cult like QAnon? But if we don’t study QAnon as a New Religious Movement – a NRM – then there is something profoundly lacking in our concept of NRMs.

Cults and cult behaviors did not die. They just morphed into forms where we can no longer track or observe them by anything resembling traditional methods. 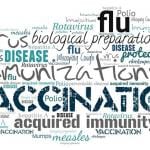 December 8, 2020 When (Almost All) Christians Welcomed a Vaccine
Recent Comments
0 | Leave a Comment
Browse Our Archives
get the latest updates from
Anxious Bench
and the Patheos
Evangelical
Channel
POPULAR AT PATHEOS Evangelical
1