I am happy to announce my forthcoming book, due out from Oxford University Press this coming Spring. It is Climate, Catastrophe, and Faith: How Changes in Climate Drive Religious Upheaval. I have described this project in past blogs but here, quite soon, we will have the actual book. The cover is gorgeously apocalyptic. Is it just me, or do I see shades of Great Cthulhu amidst the Noah’s Ark theme? 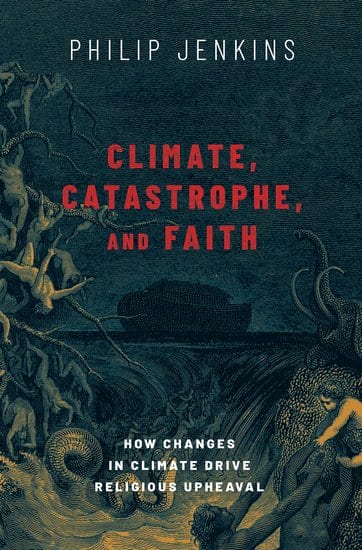 Here is the description:

Long before the current era of man-made climate change, the world has suffered repeated, severe climate-driven shocks. These shocks have resulted in famine, disease, violence, social upheaval, and mass migration. But these shocks were also religious events. Dramatic shifts in climate have often been understood in religious terms by the people who experienced them. They were described in the language of apocalypse, millennium, and Judgment. Often, too, the eras in which these shocks occurred have been marked by far-reaching changes in the nature of religion and spirituality. Those changes have varied widely–from growing religious fervor and commitment; to the stirring of mystical and apocalyptic expectations; to waves of religious scapegoating and persecution; or the spawning of new religious movements and revivals. In many cases, such responses have had lasting impacts, fundamentally reshaping particular religious traditions.

In Climate, Catastrophe, and Faith historian Philip Jenkins draws out the complex relationship between religion and climate change. He asserts that the religious movements and ideas that emerge from climate shocks often last for many decades, and even become a familiar part of the religious landscape, even though their origins in particular moments of crisis may be increasingly consigned to remote memory. By stirring conflicts and provoking persecutions that defined themselves in religious terms, changes in climate have redrawn the world’s religious maps, and created the global concentrations of believers as we know them today.

This bold new argument will change the way we think about the history of religion, regardless of tradition. And it will demonstrate how our growing climate crisis will likely have a comparable religious impact across the Global South.

As a sample of the argument, I take this from the opening chapter:

In July 1741, Congregational minister Jonathan Edwards delivered one of the most influential sermons in American history. He warned his alarmed hearers of their utterly sinful state, of how that sin had thoroughly earned God’s severe and eternal punishment. At every moment, their continued existence depended on God’s extraordinary and unmerited self-restraint, which alone prevented them falling into damnation. His hearers themselves were utterly powerless to affect their own rescue. They were “sinners in the hands of an angry God.” The sermon had a transformative effect on the congregation, whose “shrieks and cries were piercing and amazing.”

That address is one of the most admired and studied pieces of rhetoric in American history, and as such, it has earned the attention of scholars of history, communications, and English literature, apart from the obvious students of religion. Although it did not of itself launch the mighty revival that we call the Great Awakening, which had slowly been gathering strength for some years, it was one of its early landmarks. Observers at the time dated the movement’s full flowering to the years 1740-41. Historians place the sermon in its context, noting the underlying divisions within New England Puritanism, and the theological disputes in which Edwards was involved.

Rarely do they stress one fact that surely should be treated prominently, namely that Edwards and his audience had in just the previous two years lived through a horrific period of extreme weather and glacial cold. Across Europe and North America, nations recorded some of the most alarming death rates seen in several centuries, while New England itself suffered the worst weather recorded since the time of European settlement. It was a dreadfully appropriate time to preach on the words of Psalm 147:

He casteth forth his ice like morsels: who can stand before his cold?

Nor was it obvious that the climatic nightmares of 1740-41 did not represent a new normal, one that would persist through coming years. Perhaps the world’s end really was nigh, as the language of apocalypse became alarmingly plausible. People felt utterly powerless and futile in the face of Nature, and of the God who ruled it. Who could stand before his cold? Such conditions could not fail to make any audience deeply attentive to the grim warnings of the Reverend Mr. Edwards.

Of course, the climate-driven crisis of itself did not spark or create the Awakening, and Edwards’s sermon made no direct reference to that background. Yet it is difficult to comprehend the movement’s explosive growth at that very time without acknowledging that component. Similarly, throughout history, when other climate-related disasters have occurred, they have commonly had wide-ranging religious consequences: how could they not? As climate conditions have changed over time, so they have affected human affairs, and shaped attitudes. At times those conditions might have promoted prosperity, abundant food supplies, fertility, and general contentment. Quite frequently, though, we can identify periods of acute harm, either short lived – like that of 1739-1742 – or much longer lasting, like the repeated hammer blows during the prolonged cooling period that has been termed the Little Ice Age.

I tackle many other periods and societies as well, but I think that gives a good idea of the approach! It’s been fascinating to research and write the book.