What will US religion look like in a decade or two? This is the subject of a lively scholarly controversy right now, in which I hold a particular position, namely that the country is entering a period of rapid secularization. But I try to be an honest debater, and a piece of evidence has emerged that seems to support a contrary view. Let me describe it.

People who look at US religion, which predominantly means Christianity, differ significantly on present prospects. A number of serious and credible writers argue that religion is in very good health, that signs of strength and growth are apparent. My own view is different. I think that secularizing trends are strong, and have become much more so since the crash of 2008-10. That view is supported for instance by the growth of the Nones, and also in changes in family structure reflected in the country’s sharply falling fertility rate. Also, I think the current coronavirus crisis is accelerating these trends greatly: see my lengthy piece on Contemplating the Religious Future After the Crisis. Obviously, in saying that, I am brutally summarizing a substantial argument, which I discuss at length in my 2020 book Fertility and Faith, as well as the links I gave in the previous sentences. I believe that the US in the 2020s will experience a swift secular drift parallel to the revolutionary change that swept the province Québec in the 1960s. That, as I say, is what my observations lead me to believe.

I was interested then to see a major new survey from the Pew Research Center, under the title of More Americans Than People in Other Advanced Economies Say COVID-19 Has Strengthened Religious Faith, by Neha Sahgal and Aidan Connaughton. Briefly, in a survey of fourteen countries, the great majority of respondents saw no particular impact, in terms of their own faith or that of society at large. The US was markedly different. “Nearly three-in-ten Americans (28%) report stronger personal faith because of the pandemic, and the same share think the religious faith of Americans overall has strengthened.”

Although I don’t have much to criticize about the report itself, I will challenge one detailed point of the presentation. See the following paragraph:

Among Americans, about half of adults surveyed (47%) say the religious faith of people in the U.S. has not changed much, while 28% say the country has become more religious. A relative handful of Americans (14%) think that religious faith in their country has weakened as a result of the coronavirus outbreak.

The raw numbers here are fine, but fourteen percent is not “a relative handful.” If an election is carried by a fourteen point margin, we don’t call it “a tight victory decided by a relative handful of voters,” we call it a “landslide.”

Now, giving this survey credibility is the source, as Pew studies are careful and honest, and use excellent procedures of sampling and reporting. So does that research contradict my own approach? Possibly, but given a couple of quibbles. One is that I would pay vastly more attention to what people say about their own faith rather than general impressions they might have of society as a whole. That is a matter of their opinion, not necessarily based on any solid evidence. How do they know what they think they know?

There are also lots of different ways of phrasing a finding. You could for instance say, quite as accurately, that “over seventy percent of Americans said that the crisis had had no effect on their personal faith, or that it had actively weakened it.” That would have produced some different news headlines.

Also, the survey was taken last Summer, June through August, at a quite early stage of the pandemic, and attitudes might have changed over the long and weary months that have followed. I don’t know.

My final point is more substantial, and goes beyond a quibble. I draw an important distinction concerning that loaded word “secularization.” I mean by this a movement away from organized and institutional religion, but not necessarily any change in personal belief or religious attitudes. It’s quite possible to have a European society where churchgoing has all but evaporated, where very few see a significant role for religion in public life, and yet many millions still say they believe in God, and regularly go on pilgrimages. The Pew study is examining faith, not active religious commitment or participation (where such activity was even possible).

When the coronavirus finally does pass, and lockdown restrictions end, I would confidently expect places of worship to be packed, as people try to resume their normal lives. The media may well be reporting religious revivals. But then let’s come back a couple of months after that and see whether that initial surge has been maintained. I’ll be curious. That would incidentally be a terrific project for researchers.

Anyway, those are caveats. As I say, the new study is interesting, and it gives us some more data to assess the larger story. I will continue to watch with interest.

February 4, 2021
Tornado God: An Interview with Peter Thuesen
Next Post 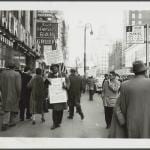 February 8, 2021 Centering Religion in American History: An Interview with Benjamin Park
Recent Comments
0 | Leave a Comment
"Paul wrote at the end of Romans to avoid those who cause divisions over non-essential ..."
Roger McKinney Will Reformed Evangelicalism Divide Over Racial ..."
"It appears that God was not finished with Lindbergh, at least at the point where ..."
stefanstackhouse The Conversion That Never Happened
"Everyone really should read the David French article referenced above. https://frenchpress.thedisp..."
Rod Bristol Survival and Resistance in Evangelical America
""as Black Lives Matter protests turned into riots"For shame. Some few BLM protests turned into ..."
guerillasurgeon Survival and Resistance in Evangelical America
Browse Our Archives
get the latest from
Anxious Bench
Sign up for our newsletter
POPULAR AT PATHEOS Evangelical
1