#LeaveLOUD and the Evangelical Reckoning

Earlier this month, Jemar Tisby shared his story of leaving white evangelical spaces with the hastag #LeaveLOUD on his Pass the Mic podcast, the first in a series of episodes where Black Christians go public with their exit stories. Tisby is not the first Black Christian to leave after a sojourn in white evangelical spaces, but he wants to change the terms of departure. For too long, most Black Christians have been leaving discreetly. In 2018, the New York Times chronicled this “quiet exodus” in light of the 2016 election of Donald Trump.

By that time it had become clear that decades of “racial reconciliation” had come up short, as white evangelicals’ enthusiastic support for Donald Trump and his (arguably) racist rhetoric and policies. “Arguably,” because many white evangelicals could be heard arguing vehemently that neither Trump nor his policies were in any way racist. Sure, he was unpolished. Sure, he liked to “tell it how it was,” but allegations of racism quickly elicited heated rebukes and often provoked personal offense from his white evangelical supporters.

Meanwhile, Black Christians in white evangelical spaces heard prayers for law enforcement with nary a mention of victims of police shootings. They listened as white congregants spoke of President Trump being God’s anointed leader. They had long been told to keep their “eyes on the kingdom, that the church was colorblind, and that talk of racial injustice was divisive, not a matter of the gospel,” but these words had become increasingly difficult to stomach in light of unfolding events.

As Tisby’s narrative reveals, it’s not just issues on the national level that play into the exhaustion and disillusionment Black Christians experience in white evangelical spaces. Tisby’s story reveals the deliberate way power is wielded in white evangelical organizations, churches, and networks, to police and constrain Black voices and tamp down any potentially disruptive conversation.

In the end, the decision to leave is often a necessary one in order to maintain one’s own integrity, but that decision does not come without deep personal, professional, and often financial costs.

Some of these costs were acknowledged when several Black pastors announced their departure from the Southern Baptist Convention late last year, in response to the decision of the six SBC seminary presidents to issue a statement condemning critical race theory and intersectionality that sent a clear message that they were more eager and willing to condemn what they perceived as errant efforts to address injustices than they were to address injustice itself.

This evangelical exodus is not new, and it is not only caused by a seemingly insurmountable racial divide. A growing “exvangelical” movement has sought to draw attention to their own departures in recent years. Activists like Chrissy Stroop and Blake Chastain have sought to bring visibility to those who have left evangelicalism and elevate exvangelical voices in describing and defining the evangelical movement in the public sphere.

Despite these efforts, the majority of those leaving evangelical churches and organizations have done so quietly. Many do so because they care deeply for the institutional mission, and many have no desire to sever relationships with friends, family, and colleagues. Moreover, many evangelicals have been discipled in such a way as to make “LeavingLOUD” more difficult. They have been taught to show deference to those in authority and have heard repeated calls for “unity.” These teachings must be understood as functioning in a way that maintains the status quo and silences voices calling for change.

Since writing Jesus and John Wayne, a book that exposes the way power is wielded within white evangelicalism in defense of white Christian patriarchy, I’ve heard from hundreds of evangelicals and former evangelicals who have shared their own stories of running up against formidable evangelical power structures. Most tell stories of staying quiet, or of quietly leaving. The few who have spoken boldly against white Christian nationalism and racial injustice have often come under attack and eventually decide to leave, often out of exhaustion.

As a result, evangelical institutions and organizations remain largely unchanged. In the past weeks and months, I have heard of a West Michigan Christian school principal being forced out of their position for advocating for racial justice, of a local Christian school social studies teacher being fired for allowing progressive social views to be discussed in class, and of area pastors who have lost their pulpits because of irreconcilable political differences with Trump-supporting parishioners. Lest these departures be misconstrued as harbingers of an evangelical restructuring, however, it should be noted that as those voicing protest are quietly but forcibly removed—or driven to remove themselves—white evangelical communities only become more homogeneous. And possibly also more radicalized.

I listened as too many evangelicals respond to the January 6 violent Capitol insurrection with the words “I don’t condone violence, but…”, followed by a string of justifications. I’ve watched staff of my own denomination’s Office for Social Justice leave their positions, one after another, only to learn of the online harassment and threats they’ve been receiving from members and office-bearers of the Christian Reformed Church. As I write this, reporters are beginning to uncover details of the Atlanta shooter. The twenty-one-year-old man who killed eight people including 6 Asian women was a member of a Southern Baptist church who professed loving “Pizza, guns, drums, music, family, and God.” Purportedly driven to murder in order target those he blamed for his own sexual temptations, it seems likely that he did not kill despite his religious beliefs, but because of them. Closer to home here in West Michigan, a recent graduate of a local Christian high school has been charged with two felonies for issuing threats against President Biden, Nancy Pelosi, and Governor Whitmer.

Despite the deflections of conservative evangelical leaders like Josh Buice, founder of G3Ministries and prominent opponent of social justice endeavors who claimed to harbor no concerns about how his ministry’s rhetoric “might be used in the future to foment further violence” (“We would never align with anyone that would, you know, justify the murderous acts–the terroristic acts–the racist acts against individuals like that”), too often those who provoke and perpetrate violence have found a comfortable home in white evangelical spaces—even as many Black Christians and Christians advocating for racial and social justice have been made uncomfortable or forced to leave.

The rifts now apparent within white evangelicalism are not new, but they have become impossible to ignore. It is not yet clear to me what the effects of our current “evangelical reckoning” will be. At this point, it appears that this reckoning is authentic and runs deep in the case of many individuals. I’ve heard from hundreds of white evangelicals who are genuinely disturbed by what they see and struggling to come to terms with their own complicity in what their faith tradition has contributed to. When it comes to institutions, however, I continue to see the active protection of existing power structures, persisting silence, and far too little courage exhibited in the face of those entrenched powers.

#LeavingLOUD plays a vital role in revealing dynamics that often remain hidden—dynamics that must be brought into the light. Depending on the circumstances, #StayingLOUD can do the same thing. But silence in leaving or remaining will only allow these patterns to persist. It is long past time for white evangelicals to call out injustice, bigotry, violent rhetoric, disparaging language, racism, misogyny, abuse of power, and the idolatry of Christian nationalism in their own communities, even if doing so comes at a cost. The cost of not doing so is undeniable, and it is a cost largely born by others.

About Kristin Du Mez
Kristin Du Mez is Professor of History and Gender Studies at Calvin University and author of Jesus and John Wayne: How White Evangelicals Corrupted a Faith and Fractured a Nation. You can read more about the author here.
Previous Post 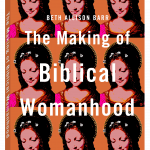 March 17, 2021
The Making of Biblical Womanhood: The Introduction
Next Post 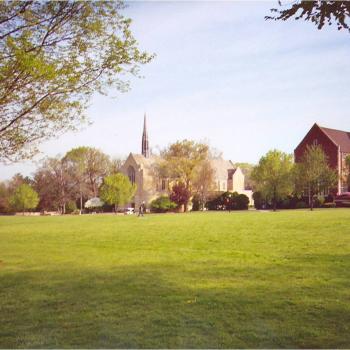 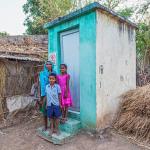 A Happy Ending without an End
In light of Nanci’s departure to be with Jesus seveb weeks ago,...
view all Evangelical blogs
What Are Your Thoughts?leave a comment
Copyright 2008-2021, Patheos. All rights reserved.