The Surprising, Spiritual Side of Margaret Mead

Today we welcome Elesha Coffman back to the Anxious Bench. Elesha is associate professor of history at Baylor University and editor of Fides et Historia, the journal of the Conference on Faith and History.

When Tim Larsen invited me to write on Margaret Mead for the Oxford Spiritual Lives series, the first thing I did was look Mead up on Google. The name rang no bells for me. If I had been a bit older, though, and more aware of the 1980s culture wars, I probably would have been shocked by Larsen’s suggestion. You mean, that sex-crazed anthropologist who couldn’t stay married? Surely Christians have nothing to learn from her!

Actually, Christians have a lot to learn from this woman who chose, against the wishes of her non-religious parents, to be baptized into the Episcopal Church at age 11. She subsequently taught Sunday school and led the Episcopal student group at Columbia, where she earned her PhD. The chapel at Columbia was so important to her that, years later, she wrote a report, “On Sacred Places,” arguing that it must be kept as a sanctuary, “a place in which judgment is suspended while caritas reigns, as well as a place where values can be tested.” 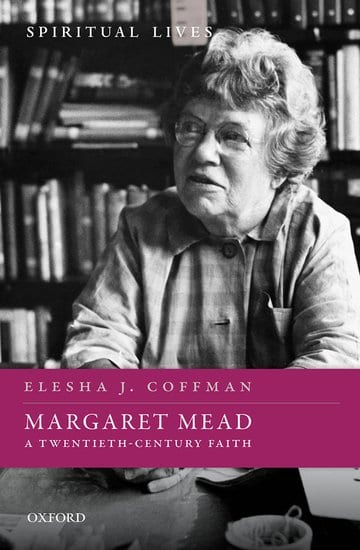 The very book that established Mead, to some critics, as sex-crazed contained trenchant musings on Christianity and culture. Toward the end of her bestselling Coming of Age in Samoa (1928), she noted how hard it was for a Christian to reconcile “the Gospel teachings concerning peace and the value of human life and the Church’s whole-hearted acceptance of war,” or for an American to square the United States’ professed “belief in the equality of man and our institutional pledges of equality and opportunity with our treatment of the Negro and the Oriental.” Living with the compromises made within churches, and between Christians and their surrounding society, was a constant challenge. One reader of Coming of Age thanked her for teaching him “to hate less fervently, to blame less readily, to check my partisan bent and to face more staunchly that sadness that underlies it all.”

During the 1940s, Mead threw herself into the work of navigating those tensions between peace and war, and between promised equality and structural racism. While some social scientists generated work intended to demonize or demoralize opponents, Mead focused on building morale within the United States and in territories occupied by U.S. troops. She worked with Jewish groups on public campaigns combating antisemitism. She served on the board of an interfaith, interracial school in New York City (the Downtown Community School) and of the Hampton Institute, now Hampton University, a historically Black college. She was not an active churchgoer at this time, in part because churches did not care as much about these causes as she did. She complained, “Invocation of a religious ethic to alter existing caste and class inequalities in American life, to change the position of a Negro or Mexican American, or the miner or the agricultural laborer, is felt to be hardly fair by people who give contented lip-service to religion but have never passed through any fires of conversion or ritual of religious initiation which have really touched them.” Because of her anthropological training, and because she took her baptism seriously, these fights for equality were her fights. She had no time for churches that dismissed these efforts as “too political” or distractions from the gospel.

It is true that Mead did not stay married. She had three husbands and several other romantic relationships with both men and women. She seemed temperamentally unsuited for monogamy, although if it had been possible a century ago for her to marry the woman (fellow anthropologist Ruth Benedict) who was her first great love, perhaps her story could have been quite different. Mead recognized this aspect of her personal life as problematic when she started to become involved in church committee work in the 1950s. Her bisexuality was not widely known then, but the divorces were, and she feared that the stigma surrounding divorce might discredit the work of any committee she joined. But witnessing the culture-transforming power of an indigenous-led church on Manus Island, New Guinea, in 1953 convinced her that churches could help knit the world together in the nuclear age. She had to try.

The Episcopal Church, and eventually both the National and the World Councils of Churches, chose to look past the stigma of her divorces and her writing about sex because they valued her anthropological perspective. For the Episcopal Church, she brought her knowledge of rituals and adolescence to bear on revising the liturgy of baptism for the 1979 Book of Common Prayer. The NCC asked her to co-chair a committee assessing the promise and peril of nuclear energy. She participated in numerous WCC study groups and spoke at several meetings. Always, hers was a voice of informed urgency, as in a 1966 speech in Geneva where she said:

The significance of this Conference is that it is an attempt by Christians to come to grips with the results of the scientific and technical changes in the world, not only with the will and the spirit, but with our minds. If this conference becomes only a sounding board for expressions of dire need by peoples caught at different periods in the world-wide changes that are going on, and a reciprocal and sentimental expression of sympathy from those who watch political revolutions from arm chairs beside comfortable fires—it will have failed. We need to go out of these meetings newly fired with a sense of what needs to be done in the world, ready to search for understanding of how to do it. [emphasis in original]

I learned even more than this about Mead’s spirituality as I researched my book, Margaret Mead: A Twentieth-Century Faith. She was consistently surprising and, yes, sometimes shocking. Saints often are.

About Elesha Coffman
Elesha is associate professor of history at Baylor University and editor of Fides et Historia, the journal of the Conference on Faith and History. She is author of The Christian Century and the Rise of the Mainline. You can read more about the author here.
Previous Post

March 3, 2021
Reading Women Authors on the History of Science
Next Post