Today we have a guest post concerning a topic that is near and dear to my heart. Christopher Tounsel teaches at Penn State University, where he is Assistant Professor of History and African Studies. His new book is Chosen Peoples: Christianity and Political Imagination in South Sudan (Duke University Press, 2021). I will quote the jacket description, but (for me at least) the key point is how religion is an indispensable element of political ideologies in that area of contemporary Africa, in a way that so obviously speaks to anyone familiar with the political thought of Early Modern Europe, or colonial America.

Here is the publisher’s description:

On July 9, 2011, South Sudan celebrated its independence as the world’s newest nation, an occasion that the country’s Christian leaders claimed had been foretold in the Book of Isaiah. The Bible provided a foundation through which the South Sudanese could distinguish themselves from the Arab and Muslim Sudanese to the north and understand themselves as a spiritual community now freed from their oppressors. Less than three years later, however, new conflicts emerged along ethnic lines within South Sudan, belying the liberation theology that had supposedly reached its climactic conclusion with independence. In Chosen Peoples, Christopher Tounsel investigates the centrality of Christian worldviews to the ideological construction of South Sudan and the inability of shared religion to prevent conflict. Exploring the creation of a colonial-era mission school to halt Islam’s spread up the Nile, the centrality of biblical language in South Sudanese propaganda during the Second Civil War (1983–2005), and postindependence transformations of religious thought in the face of ethnic warfare, Tounsel highlights the potential and limitations of deploying race and Christian theology to unify South Sudan.

I am delighted to invite Chris to discuss his important book:

On March 1, 1927, British Prime Minister Stanley Baldwin delivered a speech to the St. David’s Day Banquet in Cardiff. ‘Nationalism’, he said, ‘can take on some very ugly shapes . . . in the name of Religion or of Liberty.’ Nearly a century later, Baldwin’s words struck with prophetic might when hundreds of Americans converged upon the National Mall on January 6th, 2021. The Capitol Riot was a lot of things: a shocking display of domestic terrorism, the climax and nadir of ideological divisiveness, and the most serious attack on federal property in Washington, DC in two centuries. But perhaps the most indelible sight from that day was a mingling of religion and nationalism that was, to use Prime Minister Baldwin’s term, ‘ugly.’ Insurrectionists carried signs plastered with ‘Jesus Saves’ and ‘In God We Trust’; crosses were scattered among the riotous crowd; and one insurgent was filmed thanking God ‘for gracing us with this opportunity to stand up for our God-given unalienable rights.’

Weeks after the Riot, more than one hundred prominent evangelical pastors and church leaders penned an open letter that identified the ideology as ‘heretical’ and asserted Christianity’s fundamental opposition to calls for violence in the name of white Christian nationalism, and all forms religious and racial prejudice. While the assertion that Christianity is antiracist, peaceful, and unprejudiced seems an entirely unprovocative statement, this stance leaves other salient questions unanswered. Must Christian-infused nationalism always be heretical? Can it exist in non-racist, unprejudiced forms? Are there any example from recent memory of an innocuous, unproblematic, or even constructive form of Christian nationalism? South Sudan—which is set to mark its tenth birthday on July 9, 2021—offers a compelling space to interrogate the ancient interplay between religion, state, faith and politics.

After two civil wars often framed as those between the ‘Arab Muslim’ North and ‘Black Christian’ South, Southern Sudan seceded from Sudan to become the world’s newest nation on July 9, 2011. Christian leaders argued that a prophecy concerning Cush from Isaiah 18 had foretold its freedom, and a draft of the national anthem referred to the country as Cush, Eden, and a land of milk and honey. In the year immediately following independence I witnessed more religious invocations at commemoration festivities in the capital city of Juba. In a speech made in the shadows of the city’s All Saints’ Cathedral, the acting Governor shared that after liberation hero John Garang’s death ‘God in his mercy [gave] us a Joshua with unique talent and wisdom who took us through the days of difficulty’. Joshua, in this paradigm, was President Salva Kiir. Another speaker alluded to the Hebrew captivity in Egypt by thanking God for giving them independence, leading His children across the river, and ending their slavery. In these ways and more, it was evident that independence was more than a political occasion; it was a religious moment as well.

In Chosen Peoples: Christianity and Political Imagination in South Sudan (Duke University Press, 2021), I explore how Southern Sudanese intellectuals used Judeo-Christian Scriptures to frame their struggle for political self-determination. Spanning the late nineteenth-century to the present day, the book examines how clerics, soldiers, refugees and others laid the ideological foundations of the South Sudanese nation-state. During Sudan’s lengthy postcolonial civil wars, Southern Sudanese envisioned themselves as a “chosen people” destined for liberation while Arabs and Muslims were likened to oppressors in the Biblical tradition of Babylon, Egypt, and the Philistines. South Sudan presents a unique case in African Christianity whereby ideologues aimed liberatory, nationalist Christian thought against non-white and non-Christian co-citizens.

Even in independence South Sudanese clerics, politicians and bloggers continue to employ Biblical framings to issues of social and political concern. These individuals, ranging from recently-deceased Archbishop Paulino Loro to President Kiir himself, express politicized religious thought despite the absence of Northern Sudanese Arab Muslim ‘oppressors.’ In this paradigm, there is no fine line distinguishing the spiritual and material realms.

As American Christianity continues to emerge from the wake of the Capitol Riot and South Sudan nears its tenth birthday, the positive and pejorative auspices of Christian nationalism and political theology continue to be tested. But if recent events in the United States have demonstrated Christian nationalism’s destructive capacity, perhaps the world’s newest nation, thousands of miles away, points to other truths. Perhaps religious nationalism mustn’t always be ugly. 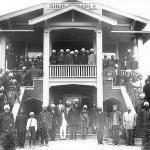 May 3, 2021 How Asian American Religious History Changes How We Write American Religious History
Recent Comments
0 | Leave a Comment
"Impressive article. Provides the necessary perspective for entering into an informed discussion about the science/religion ..."
the old scribe Science, Religion, and Nineteenth Century Protestantism
"Very helpful! Thanks! It seems history has always been used as a weapon."
Roger McKinney Science, Religion, and Nineteenth Century Protestantism
"You have done nothing to refute my point. Certainly we should do the affirmative things ..."
NorrinRadd Ron Sider and the Fate of ..."
"When we try to prohibit behavior that many people consider, we simply drive the behavior ..."
Silverwolf13 Ron Sider and the Fate of ..."
Browse Our Archives
Related posts from Anxious Bench