The Other 1960s: Remembering the Red Future

As usual, I have a couple of writing projects on the go at any given time, and I recently completed a book manuscript on The Global History of the Cold War, to be published early next year by Palgrave Macmillan. Like other things I have done with Macmillan, the book is a combination of a textbook and something intended for an interested general reader. Looking at the project, I am struck by how it takes me back to a different and largely forgotten era in terms of attitudes to the Soviets, and to Communism.

Let me make clear that my book is in no sense an exercise in moral equivalence. I have no doubt that the West genuinely represented the cause of freedom and free expression, against a brutal, oppressive, and totally unworkable Soviet system, and that view holds true even though the West undoubtedly did some very bad things, chiefly in Global South nations. In the end, the right side definitely won the conflict. But in this blog, I’d like to recall a particular period when the balance between the two sides seemed much more equal than either before or since. Hard though it might be to believe, there was a time when the Soviet cause and its culture seemed quite attractive, and even, dare I say,  relatively cool.

Confession time: I am drawing here on personal memories of growing up in Britain in these years, when attitudes to the Soviets were, I suspect, very different from what was normal in the US. But they were more representative of attitudes in Europe, and other parts of the world.

Insofar as they remember Nikita Khrushchev (Soviet leader 1956-64), Americans think of him as the losing player in the Cuban missile crisis – although he actually emerged form that conflict with much more by way of solid diplomatic victories than would be made public for decades to come. But for several years, he presented a very positive image to the world, and made claims of a “Red Future” quite plausible.

The Soviets became surprisingly successful in stressing the qualities of their own society. Living standards improved substantially, and the younger generation did have extensive educational opportunities. If glaring weaknesses remained, there was the hope that reforms and liberalization would continue.

Oddly, Khrushchev’s leadership enhanced the favorable Soviet image in these years. Khrushchev’s flaws were many and obvious. He owed his career to a slavish obedience to Stalinist policies, with all the violence that entailed, and in public appearances and statements he often emerged as a bully and boor, highly emotional and easily roused to volcanic anger. On his well-publicized 1959 visit to the US, Khrushchev sometimes projected an image of arrogant Communist triumphalism, which assisted his bluffs about Soviet nuclear capabilities. (He was a superb bluffer). In an iconic moment at the United Nations the following year, he offered a loud and furious response to a criticism of Soviet policy in eastern Europe, in which he banged his shoe on the podium. He was so easy to parody.

Yet he always conveyed a sense of authentic spontaneous humanity that was very different from the godlike image presented of Stalin, or the bland bureaucracy of Khrushchev’s own successors. Even on his US visit, he emerged as inquisitive, quirky, and even friendly, and that visit laid the foundation for warmer US-Soviet ties over the following year. Khrushchev was depicted in Western popular media, and even comedy, in ways that would have been inconceivable for Stalin. Pardon the expression, but Khrushchev seemed, um, fun.  I still remember an episode of the then very popular British comedy series Bootsie and Snudge that imagined our heroes meeting the Soviet premier on a fictional visit to London, and having a riotous and generally amicable time. It might have helped that the show’s co-star, Alfie Bass, was a veteran Communist, and its writer, Marty Feldman, was pretty far to the Left.

Moreover, Khrushchev was associated with an era of liberalization, de-Stalinization, and the expansive triumphs of the Soviet space program, with all its sensational firsts. The pioneering cosmonaut Yuri Gagarin became a huge international superstar, lauded and welcomed on his tours of many nations around the world, with the conspicuous exception of the US. In many US allies, including Britain and France, Gagarin inspired something like Beatlemania. At least until 1966 or so, you could quite plausibly believe that the Soviets were way ahead in the space race. They had the right stuff.

In non-aligned and Global South nations, people cheered Khrushchev’s ability to stand up against the imperial powers, and often to win serious diplomatic victories. They felt that people of color had a very powerful friend indeed in Moscow – and helpfully, one with lots of nukes.

If tight censorship still prevailed, Soviet culture flourished during the Khrushchev Thaw. Cinema enjoyed a real efflorescence. From the late 1950s, Soviet film entered a really creative period in multiple genres, making the USSR a leading center of film production. Some films enjoyed great international success, like The Cranes are Flying (1957) or Ballad of a Soldier (1959) with their Second World War themes. In 1958, Sergei Gerasimov adapted the classic novel of the Russian Civil War And Quiet Flows the Don into a truly impressive six hour epic.

But not all cinema offerings were so overtly patriotic. One popular production was Amphibian Man (1962), a wildly imaginative fantasy at least equal to anything that might have been produced in contemporary Western Europe. Also from 1962, Nine Days in One Year was a much praised romance set in the world of Soviet nuclear research. Any list of the world’s greatest-ever films invariably includes three or four items from the director Andrei Tarkovsky. Most admired in retrospect is his Andrei Rublev, which was made in 1966 but not released for several years in its intended form. Over and above all these achievements, from the late 1950s, Polish and Czechoslovak studios made some of the most impressive films of the era.

Soviet literature achieved real successes in both high and low culture. Poets like Yevgeny Yevtushenko achieved superstar status, to the point of holding readings in stadiums at home, and also winning international acclaim. The relaxation of literary censorship during the Thaw allowed the appearance of long-banned writings from the Stalin era. In 1962, the government allowed the publication of Alexander Solzhenitsyn’s exposé of prison camp life in his One Day in the Life of Ivan Denisovich. In 1967, Mikhail Bulgakov’s The Master and Margarita finally became available, thirty years after its completion, and it was soon recognized as one of the greatest novels of the twentieth century.

One daring effort was Boris Pasternak’s novel Dr Zhivago, which was refused publication in the USSR, but a copy was smuggled to Italy, where it was published. The CIA sponsored a Russian-language version and encouraged the book’s wide distribution, helping to make it a global bestseller. Pasternak won the 1958 Nobel Prize for literature, and a film version in 1965 became one of the most successful releases of all time. Although the US intended Zhivago to embarrass the Soviets, the scheme backfired, as the book reinforced the idea that modern Soviet culture was worth studying and admiring.

It was especially in the 1960s that schools across Europe and the UK introduced Russian teaching, and not entirely or chiefly for its use in getting jobs in politics, intelligence, and government. Russian literature and culture just seemed really attractive, if not exciting. That is quite distinct from having any leanings or sympathy to Communism as a political cause.

Science Fiction and the Red Future

The Soviets achieved international success in genre writing, and this in a sense is where my own personal interests come in. As has often been remarked, “The Golden Age of Science Fiction” is always the same: twelve. It was around this time that I hit that age, and I was duly immersed in classic SF, mainly American or British – but not exclusively. We often forget today just how big Soviet and East Bloc SF writing was, not just in Europe but around the developing world just breaking free of European rule.

Particularly successful from the late 1950s onward were the Strugatsky brothers, Boris and Arkady, who made their impact on that hitherto Anglo-American dominated field of SF. Among their leading competitors was Poland’s Stanislaw Lem, whose novels sold in the tens of millions. Tarkovsky’s production of Lem’s 1961 novel Solaris (1972) is often cited as one of the greatest science fiction films ever made. Any such listing would also include the 1963 Czechoslovak space film Ikarie XB-1, which was also based on a Lem novel. Internationally, such works appealed especially to teenagers and young adults, to the educated and aspiring, and exactly the audiences that the Soviets hoped to reach by such expressions of soft power.

In 1967, even US popular media finally acknowledged the powerful Soviet presence in space when Pavel Andreievich Chekov joined the crew of the starship Enterprise. Considering the Cold War mood of the time, this was quite a breakthrough. (Although in fairness, The Man From UNCLE already had a heroic Russian character as early as 1964).

It was in the middle of this Thaw period, in 1962, that Anthony Burgess wrote his A Clockwork Orange, for which he famously invented his whole slang system of Nadsat. A large part of the vocabulary is Russian-derived, including words like “horror-show” (khorosho, nice), moloko (milk),  or droog (friend), and plenty of others. Burgess was imagining a near-future world in which the cool kids would obviously be looking to the USSR, just as non-Americans presently turned to the US for culture and slang. Many people who love the 1971 film version fail to understand just why there is so much Russian in it, and just why young Alex and his faithful droogs were drinking their Moloko Plus. In 1962, that idea had made way more sense.

So yes, for a few years in the middle of the Cold War – say between 1958 and 1966 or so – you really could believe that the East-West confrontation involved a serious choice of cultures and civilizations, however deluded that belief might appear in retrospect, and that the Soviets were truly a presence in that race. It was a different world.

This story has a nicely symbolic aftermath. At the height of pro-Soviet sympathy in the early 1960s, the Communist authorities in the French industrial town of Ivry-sur-Seine built a daring piece of modern architecture called Cité Gagarine, which was intended as futuristic working class housing. It was named after Yuri Gagarin, who was present for the opening. Over time, the area slid decisively into the rustbelt, as the old French white working class evaporated, and Communist loyalties declined. The housing project itself became mainly an immigrant zone, for poor Muslims and North Africans. The whole Cité Gagarine project has now been demolished, and that story forms the subject of the recent French film Gagarine. 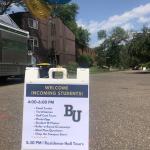 July 19, 2021 Saint Telemachus and the Volcano
Recent Comments
0 | Leave a Comment
Browse Our Archives
get the latest updates from
Anxious Bench
and the Patheos
Evangelical
Channel
POPULAR AT PATHEOS Evangelical
1