Andrew Walls: The Most Important Scholar You Didn’t Know

This past week, Andrew Walls died, aged 93. As a pioneering scholar of Global/World Christianity, he has already attracted some deeply appreciative encomia, not least from my friend Tommy Kidd at the Gospel Coalition, and there will be plenty of other tributes. But here, let me suggest that even such appreciations will fall short of the mark in offering an accurate view of the man that Christianity Today described back in 2007 as “the most important person you don’t know.” He was.

All the tributes will rightly focus on Walls’s key writings, such as his The Missionary Movement in Christian History (1996). The book is brilliant, and stimulating. But it just gives no idea of the breadth and insight of which Walls was capable, and which never received the recognition he deserved. Partly, that was a result of the book’s publishing outlet.  Orbis was and is extremely respectable and admirably open to innovative projects, but it never had the ability to reach mass audiences that would have come from a trade press, or even a major university press. Accordingly, Missionary Movement never achieved the mainstream recognition that a book would have had with a major commercial publisher.

To coin a phrase, Walls was badly under-published: if he had fleshed out the many, many, insights he had developed, that could have become a half dozen major and path-breaking books from high visibility presses. You had to seek out his work.

Some twenty-odd years ago, when I started publishing in the Global Christianity field, there were some deeply impressive and erudite scholars whose names were widely recognized: Dana Robert and Lamin Sanneh were obvious examples. But it astounded me that at least in popular perceptions, this list of the founders of an emerging discipline did not begin with Walls himself. Sanneh himself would certainly have placed Walls in that exalted position, and I know Dana Robert would agree. So would Mark Noll. As I lectured on Global South Christianity over the following decade or so, speaking to audiences in North American colleges, seminaries and churches, I repeatedly and explicitly stressed Walls and his work, and usually to blank stares. Andrew who? Things might have been different in the UK, but still…

I have never made a secret of how often I drew on Walls’ work in books like my Next Christendom, and The Lost History of Christianity: just check my footnotes. But no matter how often I cited and quoted Walls, I repeatedly found specific ideas that I derived from him (and duly footnoted) being ascribed to my own amazing insights, despite any protests I might make. And do understand here, that is an accurate statement of the case: I don’t do false modesty. Walls himself was amazingly understanding and generous about this neglect, but he could properly have been far more outspoken.

I offer an example. In 2000, Walls published an essay in the International Bulletin of Missionary Research, under the title Eusebius Tries Again. You can download the paper as a pdf, and just read it for yourself. In brief, it is a fundamental rewriting of early Christian expansion and evangelism, which puts affairs in Africa and Asia in the foreground, filling in so many of the gaps in Eusebius.

But when you read it, recall the date, 2000. This is before all the recent scholarship on Christian history in those regions, not to mention the fundamental appreciation of the need to look east and south in such matters. Every line of the essay throws off an idea that could turn into a book chapter, and the research is magnificent. This is the sort of work that creates disciplines. And that was just one of his essays. Look at his work on various aspects of African Christianity, not to mention diasporas and migration as forces driving religious change. The work is epoch-making – and profoundly under-cited.

So here, than, is my own tribute to Andrew Walls, the most significant founder of the scholarly study of Global or World Christianity. And arguably, the Onlie Begetter.

August 13, 2021
Writing The Cold War: What Surprised Me - Continued
Next Post 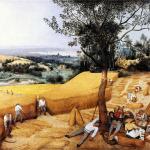 August 17, 2021 Why My New Book Is More Than *My* Work
Recent Comments
0 | Leave a Comment
Browse Our Archives
Related posts from Anxious Bench