Why My New Book Is More Than *My* Work

It’s August 17th, which means that Charles Lindbergh: A Religious Biography of America’s Most Infamous Pilot is officially available at a brick-and-mortar or virtual bookseller near you. In the run-up to publication, I’ve written a lot at this blog about “my new book.” But now that the day is here, I’m struck that I maybe shouldn’t be using that possessive pronoun.

Don’t get me wrong: I’m very proud of this book, and I’ll claim copyright over it for the sake of how intellectual property laws work. But thinking of this book as “mine” can obscure much about how books are written, published, and read.

Like most Americans, I generally think about property the way John Locke did. In the fifth chapter of his Second Treatise of Government (1690), the English political philosopher arrived at a problem facing Christians. While “natural reason” declares a human right of self-preservation, divine revelation makes clear that God has “given the earth to the children of men; given it to mankind in common.” (Here Locke cites Psalm 116:15 — “The heavens are the Lord’s heavens, but the earth he has given to human beings.”) So if “no body has originally a private dominion” over the earth, how can any individual “appropriate” that which is necessary for life?

By adding work to it:

The labour of his body, and the work of his hands, we may say, are properly his. Whatsoever then he removes out of the state that nature hath provided, and left it in, he hath mixed his labour with, and joined to it something that is his own, and thereby makes it his property. It being by him removed from the common state nature hath placed it in, it hath by this labour something annexed to it, that excludes the common right of other men: for this labour being the unquestionable property of the labourer, no man but he can have a right to what that is once joined to, at least where there is enough, and as good, left in common for others.

Property so defined is what Locke guaranteed as a natural right, to be protected — with life and liberty — by the government.

While workers like me aren’t exactly tilling fields and felling trees, others have expanded Locke’s definition of property to the realm of ideas. By adding countless hours of my own labor — research, analysis, synthesis, expression — to the idea of Charles Lindbergh’s life, I have created a kind of intellectual property over which I can claim ownership.

I’m not here to quibble with Locke’s core argument. (Though I will note Jill Lepore’s point that Locke’s definition conveniently provided a justification for white settlers’ appropriation of the “great tracts of ground” to which he claimed Native Americans “lie waste” — i.e., didn’t cultivate in the manner that European farmers would.) But if there is something important about labor being added to an idea, then I’d like to take the occasion of publication day to talk about the other people whose work is essential to a book like mine.

For a biography, that list has to start with the subject. I could only begin to think about this book because of how Charles A. Lindbergh spent and misspent his 72 years on this mortal coil. And the same is true to a slightly lesser extent of his wife Anne, whose life story is told in parallel to her husband’s in my book, and all those who become supporting characters in my drama.

I’ve often thought how peculiar it is that I’m working with the lives of other human beings the way an artist might work with clay or marble or paint. (Would I want someone to render my likeness using my life? Not hardly.) But of course there’s a difference: as a historian, I can only reconstruct a life by engaging in the reasonable interpretation of available evidence. Historical writing is an act of imagination, but not in the way that a novel like, say, Philip Roth’s about Lindbergh is.

So I also depend on the work that produces and preserves evidence. Work like Charles Lindbergh scribbling in his diary in the middle of combat in 1944, then later turning over that slim leather volume to Judith Schiff and the other archivists at Yale University, along with manuscripts of the published books that also give me insight into his eventful life and complicated beliefs. Or Anne Morrow dispatching letters to her sisters about the handsome pilot she met and married, then publishing that — and even more revealing — private correspondence decades later. Or pastors preaching Lindbergh sermons in May-June 1927, at a time in American history when such religious expression was still published in newspapers, on the same flimsy paper where journalists later reported on the Lindbergh kidnapping trial and columnists still later debated Lindbergh’s views on U.S. intervention in WWII… fragile material that technicians like my former student Hailey work to preserve digitally.

Then there are earlier employees of that same state historical society, so dedicated to preserving the home in Little Falls, Minnesota where Charles Lindbergh grew up that they would reconstruct the library in its drawing room, giving me some insight into the philosophical and spiritual life of his parents. And still another person who worked for the Minnesota Historical Society: a Harvard-trained historian named Grace Lee Nute, who recorded interviews and correspondence with Charles Lindbergh and his extended family for a biography of his congressman father.

Nute never finished her book, but I could never make sense of the available evidence if other historians and biographers hadn’t already made their own attempts at interpreting it. Or if other scholars hadn’t done work that helped me understand the context for the life and ideas of Charles Lindbergh — like Erika Jackson and Dag Blanck on the racial views of Swedish immigrants, or Joseph Corn and Kendrick Oliver on the religious dimensions of flight and spaceflight, or Philip Boobbyer and Daniel Sack on Frank Buchman and his Moral Rearmament movement.

One of the many reasons that I dedicated this book to Bethel physics professor Dick Peterson is that he has done more than anyone to help me see scholarship as the collective work of a community that spans space and time. In his contribution to an earlier book with my name on its cover, he celebrated science’s “consensus-seeking openness to the correction of fellow workers. In this fashion the global science community traditionally seeks to function almost like a giant brain that is open to input and peer review from fellow workers as it seeks consensus.” Perhaps the same can be true of the humanities.

Even the very notion of writing a spiritual biography of Charles Lindbergh originated with the work of others. MRA worker-turned-Congregational pastor T. Willard Hunter tried that project almost thirty years ago, though I didn’t actually read his book until my own project was well along. The seed of my own interest was planted in a graduate seminar on World War I, where Mary Habeck had us read Modris Eksteins’ Rites of Spring. To help illustrate how people in 1927 “worshipped and adored” Charles Lindbergh, Eksteins quoted Harry Crosby’s description of the American landing in Paris: “…it seems as if all the hands in the world are touching or trying to touch the new Christ and that the new Cross is his plane.”

Or so I thought that’s where my Lindbergh interest began… Not long ago, my mom was moving some things around at home and found a paper that I wrote in 1989, for a unit on immigration in 7th grade U.S. history class. Though mostly a family history of my Swedish ancestors who settled in Wisconsin, it included a paragraph about a famous Swedish American who grew up one state west of my Peterson relatives. 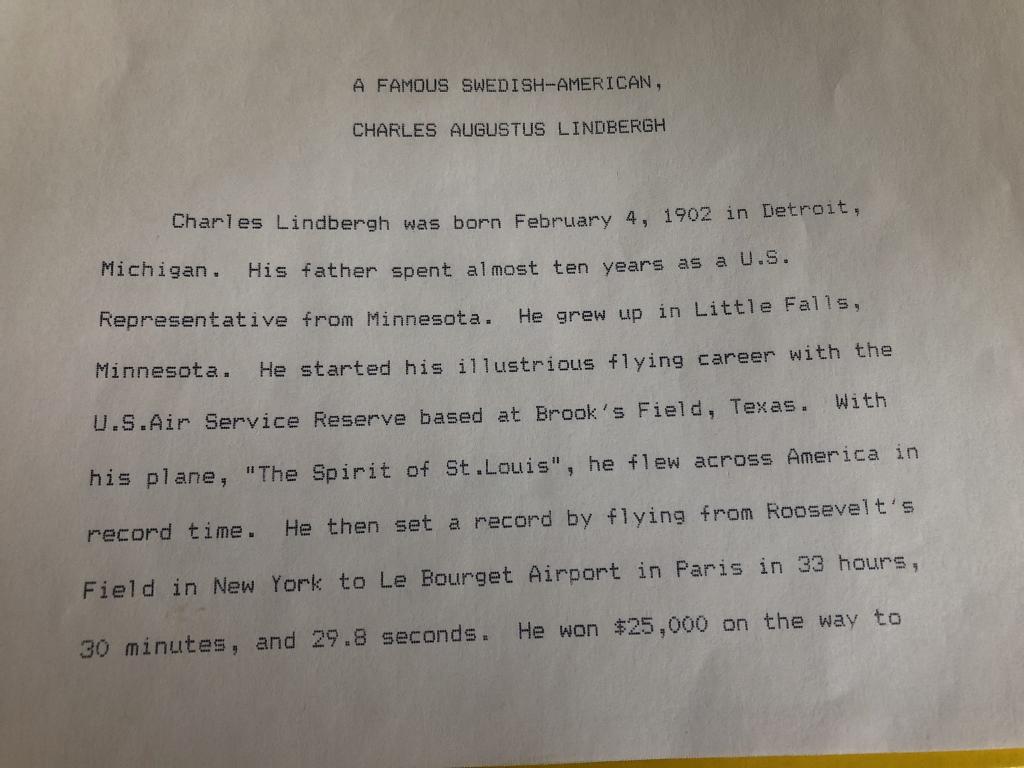 I don’t mean that I started thinking about writing this book I was thirteen. But it’s a welcome reminder that the main reason that I’m a historian in the first place is that I was inspired by the teacher of that 7th grade class: Maureen Conway. She didn’t know that her teaching would indirectly produce a spiritual biography of Charles Lindbergh — and she’d surely recoil from many of his beliefs that I investigate — but I would never have written it without her labor.

And none of that effort — mine or others’ — would have resulted in a book at all were it not for the work of people at Wm. B. Eerdmans Co., starting with the Dutch Reformed immigrant who founded that company 110 years ago last week. What I’ve written is just the latest installment in a venerable Eerdmans series now overseen by Heath Carter and Kathryn Gin Lum, a line that originated thirty years ago thanks to the vision and efforts of Mark Noll and the distinguished scholars he recruited to write religious biographies. (I still can’t believe that I’m sharing a series with Harry Stout and Edwin Gaustad!) And the book reads like it does, looks like it does, and will reach that audience that it will because of people like David Bratt, Laurel Draper, Tom Raabe, and Laura Bardolph Hubers.

And yet the list of co-laborers is only beginning. There would be no reason for the research, writing, editing, and the rest if the book were not read, if the ideas were not communicated to people who would then enter into their own work of interpretation and reflection. That’s why today, while a milestone, does not mark the completion of a project but its transition to a new stage, as I begin to hear from reviewers and readers adding their own intellectual labor to the idea of Charles Lindbergh and his spiritual journey.

(This is only a partial list of people to whom I owe thanks. You can find the full acknowledgements section at the beginning of the book, and on my personal blog.)

August 16, 2021
Andrew Walls: The Most Important Scholar You Didn't Know
Next Post 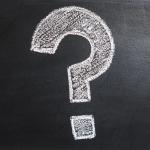 August 18, 2021 Is it Time for Fundamentalism Again? A Review of Owen Strachan’s Christianity and Wokeness
Recent Comments
0 | Leave a Comment
Browse Our Archives
Related posts from Anxious Bench