In some periods in history, events and trends move at a rocket sled pace, when a generation’s worth of change seem to be packed into a couple of revolutionary years. Often, such eras of whirlwind transformation shape social and cultural agendas for decades to come One such time occurred between 1739 and 1741, when Americans underwent a radical restructuring of everything they knew about race and religion. And giving that crisis profound modern relevance, that change resulted directly from a devastating climate crisis. I am drawing here on my recent book from Oxford University Press, Climate, Catastrophe, and Faith: How Changes in Climate Drive Religious Upheaval.

Between 1739 and 1742, for reasons still not fully understood, the North Atlantic world suffered amazing drops of temperature, with historically unprecedented snows and freezing rivers and seas. Summers in turn brought torrential rains that ruined crops. Starvation and subsistence crises blighted Europe and North America, to be followed promptly by epidemic diseases. In Ireland, just to take one example, population losses were actually worse than those of the great Potato Famine a century later, when seen as a share of total population.

In some cases, starving and terrified populations rebelled against their masters. In other settings, they sought explanations for the crisis by seeking out those evil minorities and malefactors who had so egregiously provoked God’s wrath. Naturally enough, American nightmares found expression in very traditional ways, targeting those of other races and faiths. Following a slave rising in South Carolina in 1739, that colony passed its infamous Negro Act, placing draconian and unprecedented restraints on the behavior of slaves, who were forbidden to learn to write. That act was widely imitated in the fast-expanding slave territories of the southern colonies. In South Carolina itself, it remained in force until 1865.

Another outbreak of paranoia occurred in New York City, where the winter of 1740-41 was the worst in memory, marked by privation, hunger, cold, and economic chaos. Following a series of unexplained fires, investigators concocted an explanation in the form of a slave insurrection, aided and abetted by (white) Catholics and their priests. Some 200 suspects were arrested, in a city with a population of just 14,000. Between May and August 1741, seventeen blacks were hanged, and thirteen blacks were burned at the stake. Four whites were also hanged. Seventy blacks and seven whites were deported.

Without appreciating the terror and desperation of these years, we can hardly understand the religious explosion that now occurred, and which laid a foundation for the emergence of the evangelical movement. We all know about the Great Awakening, but let me place it strictly in the climate context of those years. Through the 1730s, revival movements had been emerging sporadically and on a highly local basis, particularly in New England. But it was during and after those horrendous years of 1740-41 that the true explosion occurred.

Famously, in July 1741, Jonathan Edwards preached a sermon that became one of the most famous pieces of American rhetoric. Telling his hearers of the eternal agonies that they had provoked by their sins, he warned that their very lives depended on God’s astonishing patience in letting them remain alive for another moment. They were Sinners in the hands of an Angry God. Among Edwards’s listeners, the “shrieks and cries were piercing and amazing.” In understanding such reactions, we have to recall a society entering a third year of what seemed literally to be apocalyptic judgment, and desperate to avert divine wrath. Throughout the colonies, diarists and preachers alike turned again to one landmark scripture, from Psalm 147: “Who can stand before His cold?”

Edwards was by no means the only leader of this religious upsurge, which offered hope in a time of crushing despair. The best known figure at the time was George Whitefield, who arrived in America in September 1740, when the country was in despair at the catastrophic rains. With his message of judgment, regeneration and salvation, he received a rapturous welcome, and spoke to audiences on an astonishing scale. A sensational gathering in Boston in October 1740 claimed an audience of 35,000, at a time when all the British American colonies combined could muster a population of only some 900,000.

Besides Whitefield, the crisis also brought over new arrivals to America’s shores in the form of Irish and Scottish Protestants fleeing ruinous famines. They brought with them traditions of great open-air gatherings to preach and teach, which soon evolved into that quintessentially American custom of the camp meeting. Only in modern times do we understand these migrants as the climate refugees they clearly were.

Over the coming decades, the Awakening that now ran through the country split denominations and challenged hierarchies, and galvanized ordinary believers to defy any and all restraints on their freedom of speak and preach. Tommy Kidd has aptly described Whitefield as “America’s Spiritual Founding Father.” But however mighty their oratory, superstar preachers could have achieved nothing if their audiences were not in such crying need of comfort and assurance.

That earlier climate crisis differed from contemporary threats in that it was a single and deeply episode of relatively short duration, rather than the open-ended and enduring menace of global climate change. But in so many ways, it did foreshadow what we can expect to see in many parts of the world in the near future, in the many societies that still frame worldly disasters in a supernatural context, and which seek religious explanations and solutions. In the Atlantic world around 1740, people responded by stressing apocalyptic themes, by scapegoating and attacking outsiders, and also by launching transformative religious revivals. Today, as seas rise and deserts spread, as supplies of food and water become scarce, as people flee to new lands, we will see a recurrence of all those responses, only on a far vaster scale than hitherto.

September 10, 2021
Teaching the Cold War Through Songs and Music
Next Post 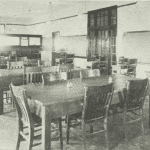