The Future of Liberal Mormonism

This is my final regular post for the Anxious Bench after nine years on its roster of writers. That’s a long time to stay on any bench, let alone an anxious one. But it’s been a wonderful resting place for me, because of the friends who have sat on it with me. I’m grateful to them and to Patheos for the liberty I’ve enjoyed to fill this space with what moves me.

The Church of Jesus Christ of Latter-day Saints “finds itself at something of an inflection point,” explained Emily Kaplan in a recent essay for the Washington Post magazine. “The Rise of the Liberal Latter-day Saints,” announced the headline. (They could be the LLDS).

What’s the evidence for this? In a way, quite a lot. Kaplan profiles a progressive ward in Berkeley, visits a gay Latter-day Saint men’s group in Rexburg, Idaho, and she references Jana Riess’s findings that around 20% of young Latter-day Saints do not identify as heterosexual. In other words, liberal Latter-day Saints aren’t hard to find.

Mormon politics, moreover, have changed a great deal. According to Pew, 80% of Latter-day Saints voted for George W. Bush in 2004. More young (under 40) Mormons voted for Biden than Trump in 2020, but Trump may have increased his overall Mormon support in 2020. Still, there is something afoot.

As other scholars (here Ben Park) have noted, Kaplan could have written a similar essay anytime in recent decades, about Latter-day Saints who dissent from current policies and doctrines and who advocate and agitate for change. It may well be that the young and rising generations’ stance on LGBT will fundamentally change this dynamic. But I’m skeptical.

I’m not skeptical of the inevitability of change over time. For all of the sense that the LDS Church moves slowly, I don’t know that this is more true than of many other large religious organizations. At the very least, Mormon polity leaves open the possibility of quick change. On LGBT issues, the church has already changed its policies and tone to a substantial degree over the last two decades, Elder Holland’s recent rhetoric notwithstanding. No doubt there will be future change, as Patrick Mason suggests in the essay: “People have already started to do the work to sketch out a theological rationale that would allow for the kind of revelation that allows for women’s ordination, for same-sex marriage, all kinds of things .. what was once possible then becomes probable.”

Possible, certainly. Probable, hard to say. I see the church’s leadership remaining firm on not ordaining women for quite some time. LGBT issues seem to be more of a pressure point, and if large numbers of members – really large numbers — started leaving the church over the issue, that might produce change.

Several things give me pause, however. The “rising generation is pushing [any] church left” story is a near constant refrain in the media and even in scholarship. You can see that with stories about the evangelical left. I’ve been reading about that since I started reading about evangelicalism, and it’s been a while now. To be sure, the structure and dynamics of evangelicalism are very different. In many respects, evangelicalism is more progressive than it was a few decades ago. Or, better put, some segments of American evangelicalism have become more progressive on matters of gender, race, and LGBT issues. At the same time, white Americans who identify as “evangelical” or “born again” have become even more solidly Republican and supportive of Christian nationalism. It is as at least as likely that progressive evangelicals will leave evangelical institutions than that those more conservative institutions will adapt to progressive values. Latter-day Saints might be more reluctant to give up on their institutions, more willing to stay in order to change them, but that’s not necessarily the case in the long run.

There also seems to be a general presumption by many that change will always be progressive. Sometimes institutions retrench or embrace more socially conservative positions. In some institutions, such as the Southern Baptist Convention, change ultimately depends on the opinions of the thousands of “messengers” who attend meetings. In the LDS Church, change ultimately depends on the revelatory leadership of a small number of men.

Kaplan’s essay also focuses exclusively on American Latter-day Saints. It’s true that a sizeable portion of young American Latter-day Saints dissent from current doctrine on issues such as same-sex marriage. But would the church be immune from the international divides that have riven the United Methodist Church and the Anglican Communion? Would church leaders be more concerned about disaffected young Americans or presumably more socially conservative church members in Latin America and Africa? I’m not sure, because I don’t know enough about these dynamics within the church. But I’m not sure they’d push in the direction that progressive American Latter-day Saints desire.

Historians aren’t prophets, either in the generic or specifically Latter-day Saint case. It’s hard enough to figure out the past. But one thing is sure. You only have to look at the history of religious institutions to know that their futures are full of surprises. 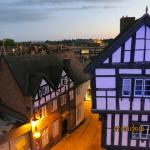 September 29, 2021
What I Learned from a Good Academic Book Review: A (sort-of) Response to Kevin DeYoung
Next Post

October 1, 2021 The Cold War Was My Life
Recent Comments
0 | Leave a Comment
Browse Our Archives
Related posts from Anxious Bench