Today I am so pleased to welcome Amy Achenbach to the Anxious Bench. Amy is a second year PhD student in the History department at Baylor University. I have the privilege of teaching her for the second time in one of my graduate seminars–Women and Religion in Fall 2020 and currently in my Women’s History and Theory Fall 2021 seminar. Just last week we read Judith Bennett’s History Matters: Patriarchy and the Challenge of Feminism in my current seminar, but Amy reflected on it as a book review for my Fall 2020 class. The issues she comments on are just as significant, as well as charged and contentious, in 2021 as they were in 2020. Before I launch into a multi-post response (sort of) to critiques of The Making of Biblical Womanhood (stay tuned), I thought it would be fun to give you a taste of one of my graduate seminars.  Happy Reading!

As a student of history in the midst of not only a global pandemic of the novel coronavirus (COVID-19), but also an almost assuredly contentious election year, I have recently found myself turning to my training as a historian to make sense of my present. This has, of course, led me to reflect upon my past, and especially lived memories of the most recent election.

Five years ago, I was a senior in college studying history and applying to graduate programs. At this time I was making important choices about my life and career. Having developed a deeper appreciation for women’s history in my undergraduate studies, I determined that this was the furnace where I would attempt to forge a career.

For the purposes of this discussion, what I’d like to focus on are the repercussions of that election. As you probably well know, the 2016 election sparked a visceral backlash from American women. Subsequently, these women called for a “women’s march” in Washington, DC to be held the day immediately following the inauguration of Donald Trump. The Washington march quickly went national, and then global, in what was widely reported at the time as the largest gathering of women since second-wave feminism took the nation by storm in the late 1960s and 1970s.[1] Now this was a historic event that I could not bear to miss.

A then undergraduate, I could not afford a solo trek to the nation’s capital, but I nevertheless resolved to make the two hour drive into my home city, Pittsburgh, in order to join the sister march there. A complete novice to marches, I didn’t know what to expect as I crisscrossed through the many bridges that lead to the city’s center. What I found was nothing like I had ever experienced, nor have since, in my 25 years.

There I found thousands of women and men, representing a wide spectrum of ages, races, ethnicities, and abilities from the rural, suburban, and metropolitan areas surrounding Pittsburgh. What these “yinzers” (or people from the greater Pittsburgh area) had in common was a passion for women’s issues in the context of a seemingly unresponsive society. A historic moment indeed.

With the advantage of hindsight and a few years devoted to training in the discipline of history, what strikes me now is what was missing from that Pittsburgh “Women’s March.” We heard speeches on intersectionality, inspiring tales of activism, and even the promises of local officials, but what we did not hear was history.

Where was the history? Certainly, the 2017 Women’s Marches cannot be divorced from the long tradition of feminism and women’s activism in the United States. Yet, in retrospect this historical tradition seems suspiciously absent or lacking. As a historically-minded young woman, I certainly felt connected to those feminists of generations past; I even wrote as much in an Instagram caption later that day (as Millennials are so wont to do). Where then was women’s history?

The divorce of feminist thought from women’s history, and vice versa was not a new problem in 2017. In fact, Judith Bennett, a leading historian of women in the medieval period, had identified this trend over a decade before.

My recent reading of Bennett’s History Matters: Patriarchy and the Challenge of Feminism, however, brought this divide more clearly in focus. In History Matters, Bennett gives voice to her growing concern over the divergent path of women’s history and feminism since their mutually-supported revival in the 1970s. In tackling this topic, Bennett’s purpose is greater than illuminating this troubling historiographic trend. Instead Bennett seeks to reunite the estranged pair of history and feminism, or feminist theory.

Bennett’s argument is simply that women’s history is best equipped to bridge the gap between history and feminism by focusing on, or rather returning to, a feminist methodology that places patriarchy (or patriarchies) back into our analysis of women’s and gender history.

Much like a doctor assessing symptoms, running tests, and administering treatment toward a cure, Bennett moves from the identification of the problem toward her methodological prescription of a solution. Bennett models four methodical guidelines in her dissection of history: a focus on feminist issues, inclusion of the distant past, attention to continuities (instead of change), and an attunement to the workings of patriarchal power. In practice, this calls for a reunification of feminism not just to the recent past, but toward a longue durée analysis. A crucial part of extending our histories of women is the recognition of continuities that traverse centuries and even continents. Thus, extending our analysis of the wage gap, as Bennett does in chapter five, shows that the disparity has been strikingly constant from the fourteenth century to the present, hovering between one-half to two-thirds. What this suggests is a larger issue of patriarchy concealed beneath any institutional apparatus, and it complicates any modernist’s narrative of the same topic.

A medieval historian schooled in the formative years of the women’s movement, it is unsurprising that Bennett’s examples and methodology draw heavily from her period of expertise. This constitutes one of the strengths of the book, as her training in medieval Europe lead her to ask questions a modernist might not. Furthermore, it only highlights the utility of the distant past to a twenty-first century feminism steeped in a presentist-milieu.

Bennett’s personal background can also be a weakness. As a historian raised in the formative years of women’s history, Bennett makes a set of assumptions about her peers. Although she admits that not all women’s history or gender history is feminist history, she seems to assume the historians of her audience are equally invested in the goals of feminism and thus working to further it. While this may seem an easy assumption, it is not necessarily true. Furthermore, it begs the question as to whether women’s history is valuable outside of the purposes of feminism.

Yet, in the end, Bennett’s conclusion is sound: feminist analysis enriches history as much as history enriches feminist theory and that asking questions about patriarchies are the key to reuniting these estranged sisters. In short, historians need feminism as much as feminists need history. Returning to the present, this historian-in-training can only question if this decade, pregnant with so many issues that define women’s experience, will witness the reunification of history and feminist theory.

For that, only time will tell. 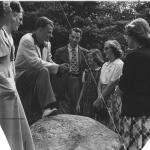 August 31, 2021
Fundamentalism and the Dynamics of Succession in Minneapolis
Next Post

September 1, 2021 Protestants and Immigration, Then and Now
Recent Comments
0 | Leave a Comment
Browse Our Archives
get the latest updates from
Anxious Bench
and the Patheos
Evangelical
Channel
POPULAR AT PATHEOS Evangelical
1