Of Revivals, Convulsions, and Witchcraft Panics

Last time I wrote about the amazing ecstatic behavior of followers of a radical Catholic sect in France in the 1730s, who became known as the Convulsionnaires, focused on what became a popular shrine at St. Médard. I was struck by the similarities of that upsurge to the fringes of revivals and awakenings in the Anglo-American world, for instance in 1740 and 1798, and asked why the French movement should not have evolved in the same way, into a mass religious revival. My answer lay chiefly in the power and vigilance of the French state and police mechanisms, which were vastly great and better organized than anything that would exist in the Anglosphere until quite modern times.

So we can understand why France did not have a revival at that point. But I offer one other and closely related question. Why did the events at St. Médard not turn into a witchcraft panic, and on an epic scale? Look back at the accounts of the time:

In the excited crowd women were especially noticeable, screaming, yelling, throwing themselves about, sometimes assuming the most astounding and unseemly postures …. their bodies, subjected during the crisis to all sorts of painful tests, seemed at once insensible and invulnerable; they were not wounded by the sharpest instruments, or bruised by enormous weights or blows of incredible violence. A convulsionary, nicknamed “la Salamandre”, remained suspended for more than nine minutes above a fiery brazier, enveloped only in a sheet, which also remained intact in the midst of the flames.

They acted in what an earlier generation would have described as a “hysterical” way, and the stories are very familiar to American historians. Are such reactions not what occurred with the alleged victims of the Salem witches, who went into “hysterical” paroxysms whenever they were brought into the company of their supposed tormentors? Remember the fictionalized version in Arthur Miller’s The Crucible. Exactly the same story could also be told of many other witch persecutions of the seventeenth century, in Sweden and elsewhere, and in virtually every case the supposed victims were teenage girls or young women. The fact that they behaved thus was thought to be clear proof of their possession by an evil spirit controlled by the accused witch, who was duly investigated and punished. Insensibility to pain was also a factor in many trials, when investigators searched a suspect’s body for the witch’s mark left by the Devil.

The sensational behavior is fairly constant over time, and the catalog of seemingly miraculous bodily reactions will immediately resonate with observers of so many movements in primal religions, not to mention many charismatic Christian sects. We could easily be in the world of hostile commentators on the Azusa Street revival, or of many later upsurges in the Global South. If such events had happened in the US in 1820, they would be seen as marking a religious revival. In modern Brazil, we would be writing about Pentecostal enthusiasm. But the interpretations differ enormously in different eras and settings. If something like the St Médard eruptions had happened a century before 1730, virtually certainly they would have been understood as the marks of witchcraft. In fact, that is very much what did happen with the notorious case of the possessions in the convent of Loudun in the 1630s, which became the subject of Aldous Huxley’s The Devils of Loudun.

So why did French authorities in the 1730s not think in terms of witchcraft or possession, as their predecessors assuredly would have done? Largely, this was  because the ideological setting of the time was changing so fast in Enlightenment Europe, and belief in witchcraft was increasingly viewed as a sign of ignorance and raw superstition. The last witch to be executed in Sweden perished in 1704; in England, in 1716; and in Scotland, in 1727. France generated a panic in the classic mode during the economic crisis of the early 1740s, when twenty-seven people (including three priests) were implicated in a large case involving Black Masses. But this “trial of the Wizards of Lyon” was an isolated outbreak, and in 1745, one of the executed priests became the last person to be legally killed for the offense in France. But otherwise, witchcraft was definitely yesterday’s news. Do note that the 1742 cases happened far from sophisticated Paris. (Benighted Switzerland did not execute its last witch until 1782).

The behavior that we see among the convulsionnaires is a recurring and even timeless human phenomenon. How it is interpreted – whether as revival, miracle, possession, witchcraft panic, or psychiatric meltdown – depends on a variety of factors, including ideological and cultural trends, and the powers available to particular state and bureaucratic mechanisms. Witchcraft panics have more in common with “conventional” and approved religious behavior than we might immediately think. 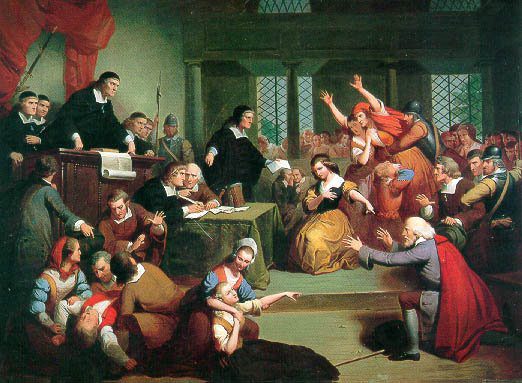 December 3, 2021
Of Awakenings, Convulsions, and Writing Christian History
Next Post

December 7, 2021 Reconstructing Evangelicalism
Recent Comments
0 | Leave a Comment
"Good luck on your new path."
Scott. F. feighner A Farewell Post
"Undoubtedly they start the story, then there is an upsurge during and after the first ..."
philipjenkins Of Empires, Faiths, and Unintended Consequences
"I believe that the impressive growth of Christianity in Sub-Saharan Africa is an indirect result ..."
Tony Of Empires, Faiths, and Unintended Consequences
"Intriguing. I didn't know that Walter Rauschenbusch was a prohibitionist! Odd, since his book,Christianity and ..."
Daniel Wilcox “Everything You Know about Prohibition Is ..."
Browse Our Archives
get the latest updates from
Anxious Bench
and the Patheos
Evangelical
Channel
POPULAR AT PATHEOS Evangelical
1