Quitting Church for Lent? Why the Desert is Not the Answer

Ash Wednesday and the season of Lent that it ushers in, are appropriate for considering the desert as a place of spiritual growth. After all, it was Jesus’ forty days in the desert that began His earthly ministry. And yet, the stories of the Desert Fathers and Mothers, these strange people who quit Church and society to move into the desert in Late Antiquity, remind us, ironically, that the desert should never be our destination. Let us consider why not.

In the late third century CE, a Christian ascetic who had spent his life up to that point quietly organizing monastic communities in Egypt, decided that the company of other people was distracting him excessively from his spiritual priorities. And so, this ascetic, Antony, quit church and human society, resolving to live out the rest of his life away from all people, seeking God relentlessly through prayer and extreme asceticism. He moved into an abandoned old fort by the Nile, locking the gates from inside for good. Or so he thought.

I am currently completing a book on cultural Christians in the early Church from the first to the fifth centuries CE. And in the last chapter of this book, I examine the movement that Antony represents – the ascetics who abandoned all contact with people in order to pursue holiness alone in the desert. I argue that, ironically, while these Desert Fathers and Mothers were sincere in their pursuit of God, their actions are an example of cultural Christianity, akin to the movement today of Christians who claim to love Jesus, but reject the local Church. Such stories today, in fact, fit a little too comfortably in the booming genre of “quit lit” — the celebration of people quitting, well, just about everything, from jobs to relationships to carbs to, yes, church.

It is ironically appropriate that Antony chose an abandoned fort as his place of refuge, but not for reasons that he thought. Various pilgrims and others who were fascinated with the idea of running away from society and moving into the desert, slowly began trickling into the vicinity of his fort, effectively surrounding the shut-away saint. In his fort, Antony was living increasingly under siege from like-minded quitters. Perhaps he put an extra bar on the gate.

The siren call of the desert, as Antony’s besieged existence reminds us, was strong for many Christians in Late Antiquity. As Athanasius, who published a best-selling Life of Antony noted, “the desert became a city.” It appears that he was not exaggerating. A travelogue, Inquiry About the Monks of Egypt, is a narrative first-hand account of a trip that seven monks from a Jerusalem monastery took around Egypt in 394-395 CE. The narrator, who chose to remain anonymous, describes the Egyptian desert in the late fourth century as a land taken over by ascetics, living in hermitages, caves, abandoned buildings, and even (in one case) taking completely over a previously normal pagan city, Oxyrhynchus.

Some days, the desert’s siren call sounds remarkably attractive to me across the centuries. As an introvert who loves ideas, but is also a full-time academic and a mom of three talkative and loud image-bearers, I can see the appeal of the desert for Antony and his ilk. The notion of silence, utter glorious silence in which I could be alone with my thoughts and ideas, is, if I am being honest, an idol.

True, I can imagine God speaking to me in that silence, in a way that I don’t think I can ever hear His voice over the louder voices of the people in my life – indeed, I am reminded of one Desert Father, John the Dwarf, who told a visitor who came to see him to stop talking and leave, so he could hear God’s voice again. But then I also love food, so the ascetic lifestyle certainly is not one that I would ever willingly embrace wholesale. I am not giving up chocolate for Lent, in case you wondered! These extreme ascetic diets of the Desert Fathers and Mothers, varying from three figs a day, to a basket of bread for an entire year, to even three loaves of bread for a lifetime, seem to have evolved over time into an extreme sport of sorts, with the different ascetics vying with each other in dietary deprivation.

And yet, I must admit that my desire for the desert and its idyllic peace does not stem primarily from spiritual thirst, but from selfishness. People are difficult (and loud! So, so loud!), and abandoning doing life with people is a very easy way out. But this also gets us to two important and related questions: What (or who) is the desert, anyway? And does moving into the desert really ever solve anything for anyone who is not the Son of God? This is where Antony’s story has useful warnings for us still.

The mental image of the abandoned fort where Antony took his refuge is powerful. It represents the fragility of institutions of conquest and colonization in the face of a relentless and ever-growing desert. To forcibly civilize a desert is always temporary. Ultimately, the wilderness will always win. But the image of the fort also reminds us of the power of walls, even those that are crumbling, to hide and protect those within. Still, words are more powerful than walls.

Stories about Antony circulated by word-of-mouth throughout Egypt and beyond after his disappearance inside the fort, only growing more elaborate over time. Arguably, his mystique grew precisely because of his disappearance. And it was these stories that brought others to move into the surrounding countryside, besieging Antony’s fort. Finally, one day, twenty years later, taking matters into their own hands, this crowd broke inside the fort.

The image of Christian ascetics and pilgrims breaking into a fort seems incongruous: this was not a war, but a pilgrimage, after all. But the walls for them were the enemy, as they were barring them from a miracle that they were determined to see with their own eyes. What they found inside did not disappoint: Antony, looking exactly as he did the day he walked inside that fort twenty years earlier, youthful and beautiful, unaffected by two decades of extreme abuse of his body through starvation, very little sleep, and daily battles with demons, who (as it turns out) could not be locked out of the fort quite so easily as people.

Continued battles with demons, representing various personal sins, are a regular feature of biographies of the desert saints. Even as some retreated further and further into the desert, into utter solitude of caves or impenetrable walls, their own demons went with them undeterred. And so, Antony and other Desert Fathers found that the desert was not a place of solitude and spiritual comfort. Instead, the desert was a place to be face-to-face with one’s sins and demons, but without any of the support structures that the Church and community could offer in the fray. It is perhaps because Antony’s besieging fans felt that absence, that they ultimately formed a new community and burst into his fort.

This warning applies to us as well. It can be tempting to try and live a life of solitude without others. For the sensory-overwhelmed, in particular, the silence of the desert can be a gift. But bereft of the community of others – spiritual, scholarly, neighborly, familial — we are the desert. This is not a good thing. In this season of Lent, may we grow in love, and not give up the relationships that need our support and that, in turn, nourish our own ever-thirsty souls. 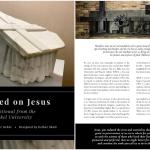 March 1, 2022
Centered on Jesus: A Free Devotional for Lent
Next Post

Evangelical
The Virtues Have Been Canceled: Life in a...
Anxious Bench