Two weeks after Russian tanks first rolled into Ukraine, the Time Magazine’s March 14 issue boldly proclaimed “The Return of History” with an image of a tank on its cover. That statement could be read in a number of ways, given its context. A reference to Francis Fukuyama’s iconic book, The End of History and the Last Man, the title acknowledged something that Fukuyama himself stated soon after: that his theory of the triumph of democratic liberal capitalism, symbolized by the end of the Cold War, is obsolete.

Yes, here was the replaying of the horrors of Eastern Europe’s twentieth century history, back for another, no less deadly spin than what Ukrainians had lived through on the previous go-around. But second, as a number of my fellow-historians noted, the statement could be interpreted as a proclamation of the relevance of military history specifically for such a time as this. A horrific war is unfolding in front of our eyes, so the study of war is back and more important than ever, right?

Of course, military history did not need current events to bring it back to prominence. As I have recently written elsewhere, military history has long been a favorite type of history for the general public. This is nothing new. Since antiquity, writers and readers have been obsessing over minutiae of famous battles and campaigns, and compiling lists of the best generals who have ever lived. Should Alexander be on that list, or was he just a spoiled brat who benefited from his much more brilliant father’s military reforms? And what about the Spartans? Are they really worth the hype, once we analyze their military achievements in closer detail? Doesn’t it say something that the battle for which they are most famous, Thermopylae, was actually a devastating loss?

The debate over who belongs on the list of the best generals in history has been the subject of at least one recent knock-down-drag-out Twitter fight, reminding us that many armchair and professional historians today continue to take these questions seriously. But then so did their ancient counterparts, who considered these topics on a more personal level too. Thirty-two-year-old Caesar famously wept when he reflected that when Alexander was his age, he had already conquered the known world. He seems to have dwelt less on the fact that by the ripe old age of thirty-three, Alexander was dead, but I digress.

What I would really like to consider here is not the merits of studying military history in general (pun intended). For the (historical) record, I have no opinion on who is the greatest general in history. In fact, as fun as such a question is, I consider it emblematic of everything that can go wrong with the study of military history. Strategy junkies prefer to study war as a sort of chess board or game, analyzing each move for its merits or disadvantages. Why did Hannibal cross the Alps in the winter, with a bunch of elephants to boot? Was this move ultimately a good strategy, considering that he lost his most impressive weapon in the process (turns out that elephants and Alps in the winter don’t mix too well)?

These are good research questions, and they have received plenty of scholarly attention. But such an approach, just as the debates over the best generals, has the dangerous potential of making heroes out of deeply flawed people who have won battles and wars by annihilating other people and, sometimes, entire civilizations. Instead, as Christians, we need to approach military history with compassion, sorrow, and a recognition of war as a man-made instrument of immeasurable suffering and destruction for real people. And so, I would like to make an emphatic case here that evangelical Christians need military history, but not of the kind outlined so far, with its potential to glorify war and violence.

Here are three reasons why we, as evangelical Christians, need military history. All three have to do with the potential of theologically rooted military history to change our outlook not only on the past, but also on our view of ourselves, our perception of our moral responsibilities to others, and ultimately our view of God.

First, few other areas of history show so clearly and indisputably the reality that Paul stated in Romans 6:23 – “for the wages of sin is death…” Taken figuratively, this statement already was at the crux of the conversation between Eve and the serpent in Genesis 3. Will Adam and Eve surely die, if they eat of the fruit of the tree in the middle of the garden? The serpent, of course, convinced Eve that death was not imminent upon the consumption of the fruit, and he was both right and wrong. There is no such confusion or room for debate when we talk about the sins that result in wars. When there is war, there is death. So much death. And, as the continued war in Ukraine shows so heartbreakingly right now, civilians bear the brunt of it.

To study war means to come face-to-face with the horrific consequences of human sin and greed. To see senseless violence and slaughter, such as in Bucha, with its streets strewn with bodies of executed civilians, should remind us of the very uncomfortable reality that ordinary people can and do commit atrocities. As Christopher Browning’s case study, Ordinary Men: Reserve Police Battalion 101 and the Final Solution in Poland, has shown so poignantly, war has the potential to destroy something in previously compassionate civilians, once they are soldiers with weapons and power.

War also erodes the belief to which we otherwise instinctively cling – that human life is precious. There is simply no room for that preciousness, rooted in the imago Dei, during war. Such violent acts as the bombing of civilians in the wars of twentieth century and in the current Russian invasion of Ukraine are very visceral examples of this erosion. This is scary and sobering, and we need the reminder that the study of war provides of how close we always are to losing that awareness of the preciousness of life.

This leads us to the second reason why evangelicals need military history. Studying war in all of its horrors should make us mourn for the imperfections and sins of this world. Too often we are tempted to delight excessively in the here and now, clinging to the joys of this world. And yes, we can be grateful for these privileges, but we cannot allow ourselves to forget the reality of suffering that is also ever-present in the here and now, and has always been a part of the human experience. This suffering is very real not only in wartime, but it is easier to ignore in other contexts. To study war means to study this suffering in a way that allows for no semantics. Bombing, torturing, raping, and murdering civilians is evil. Full stop.

Paying attention to war, as we continue to see with the on-going coverage of Russia’s brutal invasion of Ukraine, leaves us no choice but to mourn with those who mourn and weep with those who weep. This is especially apt to do in seeing this war unfold and escalate during the season of Easter, as both Peter Wehner, columnist for The Atlantic, and Timothy Snyder, historian of Eastern Europe, noted last week. Such a sorrow becomes a mitzvah that demands a theologically grounded response. And that response, in turn, recognizes that this world will never be perfect, because people are not perfect. This sorrow could also lead to despair – what can we possibly do right now to help? – and that is the point.

And so, our third reason to study military history, if we do so with compassion and conviction, has to do with its ability to lead us to despair over our own sinfulness and powerlessness in the face of evil, while pointing us to God and our hope in the future. If we believe that this life, the here and now, is not all that there is, then despair right now should elicit from us the same response that it did from the early Christians.

Facing despair in the face of empire-wide economic upheaval, recurrent civil wars, a pandemic, and a religious persecution, the mid-third-century CE bishop of Carthage, Cyprian, repeatedly consoled his flock by advising believers to reflect on the hope of their glorious future with God. Studying military history of any period should elicit that same despair from us over the atrocities that people of all time periods have been willing to commit against others. And seeing a historic war unfold in Ukraine right now adds a sense of helplessness to that despair – what can we do? Why are we unable to prevent these unspeakable horrors, as we passively read from the comfort of our homes about the bombing of maternity hospitals and bread lines and playgrounds and train stations, the executions of civilians in broad daylight, the kidnapping of prominent citizens, and so much more?

And yet, this is nothing new. The Christians of Cyprian’s day believed that the old age of the world was upon them, and it was all going to end very soon. But, Cyprian reminded his flock, unlike the pagans, they could look forward to eternity with God. Writing another century and a half later, Augustine, the bishop of Hippo, would likewise use theology to attempt to console an empire broken-hearted over the greatest military and humanitarian disaster of his day – the horrifically violent sack of Rome in 410 CE. Writing his magnificent City of God in response, Augustine urged believers, reeling after this disaster, so shocking and unthinkable, yet so real and devastating, to focus on the glorious city of God that they will one day experience, and whose beauty will far surpass anything they could possibly imagine now.

And so, for evangelicals, there is an answer for difficult questions that historians are otherwise not equipped to answer. As historian Marci Shore has noted in her book The Taste of Ashes about the work of the leading Holocaust historian, Jan Gross, he has been wrestling all along with the question: why does evil exist? From a secular perspective, there is no way to answer this question. We can and we should try to find ways to help those who suffer in the current war, and we should try to understand the compassionately the suffering of people in wars of the past, but this study will always feel inadequate, because we cannot end evil in this world.

Except for evangelicals, looking at military history gives us not only the opportunity to observe indisputable evil in existence – there is no arguing about the fact that every war brings about much evil and suffering – but also the opportunity to remember that the world is a part of a cosmic battle that began so long ago. It is scary, and we may not see it fully now, but at least we know how the story ends. And the end, while we will never see it in this life, will be glorious. 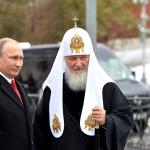