The Virtues Have Been Canceled: Life in a Post-Virtue World

Forty-one years ago, Alasdair MacIntyre published his prophetic After Virtue: A Study in Moral Theory. MacIntyre’s foundational observation that “There seems to be no rational way of securing moral agreement in our culture” is an apt way to summarize the vast gamut of reactions to the repeal of Roe. Even more so (and that is my focus here today), this is an apt summary of the divergent reactions to the litany of troubling revelations and stories that have dominated the news over the past two months – from a morally compromised professor fired from an Ivy League, to individuals with an ethically flawed compass running for election or currently serving in state and national politics and on the Supreme Court (no, I do not need to name names; the reader can easily fill in the blanks!), to abusers in the SBC, to name just a few examples.

Some are outraged at what they see as immoral and unethical abuses of power – e.g., of students by professors, of women by their husbands and pastors, or of entire groups of people by politicians. Others, on the other hand, are more prone to deny or minimize the injustices, and are more outraged, rather, by what they see as inappropriate or overblown responses. This latter view also comes with a tendency to deny the crisis or alleged wrongdoing altogether. It appears too often to be in the eye of the beholder to decide if the crisis is real or imagined.

That our society is now decidedly a post-virtue one, was driven home to me in early June by the radically divided responses to a piece I wrote for Inside Higher Education. In this piece, I used the case of Joshua Katz, the professor who had recently been fired from my graduate alma mater, as a starting point for making the argument that character judgments of public figures matter. I said, “It is time for us to unite in thinking as a democracy about character, and recognize that such abuses of power affect more than just the immediate victims… Cancellations of public intellectuals are never random. They represent a character judgment that should unite the left and the right, so-called liberals and conservatives, those who espouse a faith and those who live with a secular compass.”

To my surprise, this op-ed turned out to be the most controversial piece of writing of my entire career so far. While many agreed with me, just as many reacted in alarm that went far beyond civil discourse. One person on Twitter wrote, “If normal people could utterly destroy Nadya Williams’s career for writing this heaping pile, we could solve this problem very quickly.” He went on to mention the work of Chris Rufo in resolving such problems as, well, me. This individual failed to see the irony in his response, considering the concerns of Katz’s defenders about protecting free speech at Princeton, which to them supersede the ethical concerns with his behavior that I brought up.

In fact, another particularly angry individual, who had lambasted Princeton for dismantling free speech in its treatment of Katz, went so far as to write a lengthy denunciation of me in Newsmax magazine. I kid you not. It is a remarkable piece of fiction that speaks volumes to that individual’s deranged fears of women and any standards of moral behavior. The mental gymnastics required to cast a conservative evangelical Christian as a cookie-cutter flaming liberal were particularly spectacular.

In retrospect, as shocking as it initially seemed to see such divided responses to my exhortation for uniting as a democracy in considering virtue ethics, it makes sense that a discussion of the virtues should make some people uncomfortable now. Virtue-based character judgments hold no value if we cannot agree on certain fundamental premises about how human beings should interact with each other.

Without common assumptions for all involved in the conversation, we are talking past each other, not with or to each other. And that is how, for example, anyone who had chosen to call me names not fit to print in response to my piece could engage in such a practice without considering it, perhaps, to be a negative reflection on his own character (and, in every case, by the way, it was “his”). And the individual who angrily queried whether I was calling for “shots of hemlock all around” was inadvertently confessing to his own transgressions which, he rightly felt, my piece condemned.

But leaving aside those who were more alarmed at my criticism of the lack of virtues and character in certain settings than by the behaviors to which I objected, the various incidents in the news that show our world to be a post-virtue one leave many of us at least somewhat discomfited or rattled. For one thing, recent revelations regarding the events of Jan. 6 show clearly that the lack of virtue ethics and any regard for the character of chief players in the political arena is harmful to a democracy.

And yet, what do we do with these sentiments? In particular, the question that interests me is: how might we live virtuously in a post-virtue society? Is this even possible? Predictably, given my life-long study of the ancient world, I recommend that we look to antiquity for answers.

Of course, this solution is nothing new – this was in fact one of MacIntyre’s premises in arguing that the virtues had lost their value in the modern world. But unlike his exhortation to look mainly to Homer’s heroic virtues and to the expansion of the same themes by the classical philosophers and tragedians, I would like to take this conversation, instead, to the early Christian thinkers, and especially bishops – those who dealt directly with character formation of their flock. And the disruptions to our social fabric wrought by the pandemic make the insights of some early bishops, who pastored through similarly troubled times, particularly valuable and directly relevant.

Two years ago, during that first pandemic summer that had us all huddling at home and suspiciously examining every cough and sneeze (is it the plague? Or is it the oak pollen prompting my immune responses again?), I read a text that turned out to have the greatest influence on my research and writing since then. That text was the treatise “On Mortality,” composed by the mid-third century CE bishop Cyprian in the midst of a pandemic in the Roman Empire, through which he was living himself, and to which he would inadvertently give his name – the Plague of Cyprian.

Living in an age of extreme crises on every side – rampant inflation, political turmoil and civil wars, and the first ever empire-wide persecution of Christians – Cyprian had his work cut out for him. His extensive surviving writings show that in the face of these challenges, he was not afraid to call his flock repeatedly to repentance, urging the persecuted and beleaguered believers to put their trust in their knowledge of how it all will end – with each believer’s joy-filled eternity with Christ. Of course, in the meantime, he noted frankly, our lot here too often feels like the lot of Job.

But the aspect of Cyprian’s pastoral work that I find particularly significant for such a time as ours, is his use of his writings for the spiritual formation of character and the education of the flock in Christian virtues. In various treatises that may have started out as homilies, he called his people repeatedly to generosity towards each other, personal holiness, and kind long-suffering patience as an antidote to jealousy and envy in the body of Christ.

I am currently finishing a book on cultural Christians in the early Church from the first to the fifth centuries CE, and as I start thinking more about my next book project, I am realizing that the pastoral conversations about Christian virtues by such leaders as Cyprian provide a direct response to the culturally-inspired sins that were as much a part of the Church in antiquity as they are today.

Many in our society may not be interested in making character-based judgments. Some, as my recent experience shows, are more interested in attacking those who argue for such character-based judgments. But others, including many secular colleagues, are grieving the inadequacy of a world without a clear moral compass on issues of human worth and dignity. And strikingly, MacIntyre’s own conclusions about the future of the virtues were rather brief and cryptic. But while we may perceive the way in which virtues manifest themselves a bit differently, I see similarities with friends from very different backgrounds – a reality that fellow Christian historian Jay Green had also noted in a different context earlier this year. I appreciate the wisdom of all my friends and colleagues, and see a common task for us in pursuing justice in the profession, at the very least. Ultimately, though, we may not agree on everything else. My premises on character differ from those of many others, and in my research and writing about the virtues, my aim is to address primarily the Church.

The Church historically took character formation seriously. The sanctification of every believer, after all, matters. And so, I admit, I do not have any good answers to these difficult questions about how to live virtuously in the here and now for our society at large. My premises in making character judgments differ too greatly from those of many others, who disagreed with my view on the virtues. My premises even differ from many friends with whom I do agree on some of our views regarding the virtues. I see no path for us to reach comprehensive agreement, although we may agree on some issues, and I am grateful for the work that we sometimes are able to do together in pursuing justice in our profession, for example.

But I believe that if the Church, at least, were to devote greater attention to cultivating the character of believers and encouraging the virtues in them at least, this will ripple out into the society as well. After all, the greatest heavenly virtue of all is love, and our society most certainly needs more of it right now. 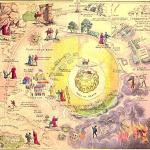 July 12, 2022
The Biblical Potency, Cultural Fluency, and Fluidity of Pilgrim History
Next Post

Evangelical
Heavy Is the History of Jerusalem: A Very...
Anxious Bench
TRENDING AT PATHEOS Evangelical