I research and publish a lot in history. The more I do, the more struck I am – astounded would be a better word – at the revolution wrought by Google and other search engines. Literally, they allow you to find things that a hundred well-trained and -funded research assistants could never have dug up just a couple of decades ago. Having said that, there is a certain art in using this resource. Excuse me if I am stating the obvious in what follows!

I have a book coming out later this year, entitled He Will Save You from the Deadly Pestilence: The Many Lives of Psalm 91 (Oxford University Press). It is about the reception of that psalm through history, and I was looking for many examples to illustrate that impact in diverse cultures and eras. I was wildly successful in finding such quotes and allusions. In saying that, I am not vaunting my own brilliance, but rather the astonishing capacities that Google has made possible for anyone willing to take the trouble.

One of the Psalm’s most quoted lines – phenomenally so – is its verse 13, which promises that

Thou shalt tread upon the lion and adder: the young lion and the dragon shalt thou trample under feet.

In the Vulgate Latin, that reads as follows:

(The Vulgate counts it as Psalm 90, but that is another story). That line is vastly used in political theory through the millennia, where pious kings or popes are meant to trample evil forces, whether those are pagans or rival kings; and it is fundamental to the tradition of exorcism. It is very frequently represented in the visual arts. That single line almost deserves a book-length study in its own right.

So at one stage of writing the book, I went to Google and entered Super aspidem et basiliscum. That phrase is wonderful for this purpose, because the words are highly distinctive, and wherever they are quoted, you know you are dealing with our psalm, and nothing else. Actually, even the brief Super aspidem works pretty well. The range of references I turned out was amazing. Some could just have been found by other kinds of very wide reading and research, but others, absolutely and totally not.

Here is an example. The Google results run into many dozens of pages. Work through them gradually, and eventually you come to a quote from a seventeenth century book recording Jesuit missions in South America. Intense further research online, lasting possibly as long as thirty seconds, allows you to download the full text of the book itself, in a 1900 Spanish edition. The story concerns Jesuit Antonio Ruiz de Montoya, who in the 1630s led what he termed the “spiritual conquest” of the Upper Amazon, of “Paraguay, Paraná, Uruguay, and Tape.” He often used the language of demons to describe the pagan societies with which he had to contend, where shamans gave special veneration to snakes. His fellow-Jesuit biographer reported the means by which Ruiz de Montoya defeated demons and possessions. Of course, 91 featured regularly, and centrally. In one possession story, the victim takes the form of a writhing snake, terrifying the spectators, but not the Jesuit Father. In order to humiliate the demon, he places his foot upon the victim’s neck, duly and inevitably reciting the super aspidem verse, which is why it appears in the book, and that is what Google is picking up.

It is a great story, which shows the use of the Psalm in the Catholic Reformation, and the mind-set of the missionaries confronting pagan cultures in the New World. It adds beautifully to my argument, and to my arsenal of examples. But here is the point. If I had been doing this book 25 years ago, say, in the era of BG, Before Google, there is literally no way I could have found it, not if I was a multi-millionaire antiquarian of Bruce Wayne proportions commanding legions of research assistants. Where would I tell them to start, unless I already suspected that something like that reference existed, which I did not. Tracking down the actual book would have been very tough indeed.

That is one example of the results from following up that one verse, and I could give you dozens more that I have incorporated in my book, from many parts of the world, and from multiple eras. To take just one region, I ended up with way more Latin American examples than I could ever have dreamed of at the outset. In another blogpost last year, I described how using a similar search term had turned up just a wonderful example of the use of that same psalm 91 as an amulet by a German soldier fighting in the French Wars of Religion. The source that Google led me to, and gave me full text, was from a hard-to-get French tract from 1573. Nobody else, to the best of my knowledge, has ever recognized or cited that story, which among other things tells us so much about vernacular uses of the esoteric and occult in the Renaissance. Am I really the first person to pick it up in 450 years? Seriously? 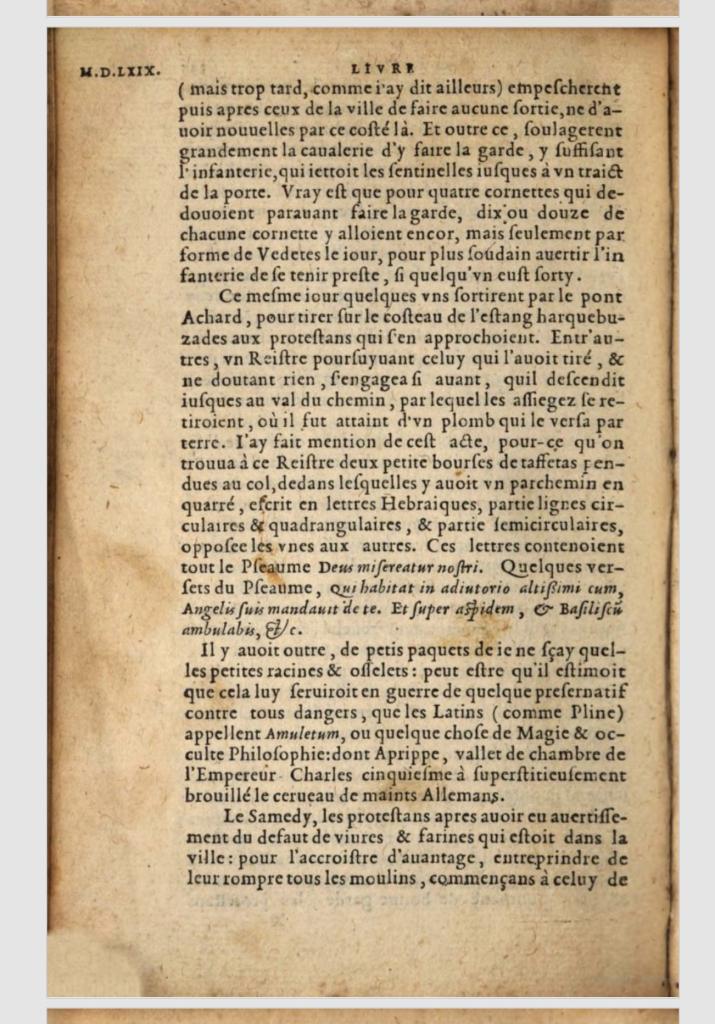 On a closely related theme, you can search a phrase like Super aspidem on Google Images, which will take you to many objects of sculpture or painting related to Psalm 91 that you would never have encountered otherwise, and add them to your discussion.

Taken together, my resulting book makes me look like a researcher of phenomenal breadth and acuity, with access to all the world’s most arcane libraries. But so, potentially, is anyone using Google. Now, you have to use it properly, and with a sense of what it can and can’t do. There are several key points here:

*You have to recognize what might be a distinctive search phrase that will immediately link to your topic. Super aspidem et basiliscum is perfect for that purpose. Something more generic, like, say, “She opened the window” is not, even in quotation marks. If you are researching a person with a distinctive or unusual name, that is very good news. Bad news for anyone working on John Brown.

*Searching for a single key word like “serpent” is not going to work, unless it is very rare – you will be rapidly overwhelmed.

*When you do find results, you have to burrow through them patiently and systematically. If there are forty pages of results, trawl through them all. That is actually not as hard as it sounds, as you will probably recognize many references on the first few pages as well-known and standard.

*Above all, you have to know what you are looking for, on the basis of all your preparatory reading. Knowing the questions to ask is vital.

*Depending on the kind of material in question, foreign language skills come in handy.

*Finally, and essentially, you need to assess what you are finding critically, to evaluate its significance and relevance, and to know how to integrate it into your argument.

*Deciding what sources not to include can be just as important as deciding what to incorporate.

*That all requires skills of writing and interpretation, or what we call “being a historian.”

But oh my, the payoff is worth it. It’s like cheating. Increasingly too, not using these methods looks like dereliction of scholarly duty.

Google is my co-pilot.

August 17, 2022
Exhibiting Evangelicalism: An Interview with Devin Manzullo-Thomas
Next Post

August 19, 2022 I Am A Historian: On Presentism
Recent Comments
0 | Leave a Comment
Browse Our Archives
Related posts from Anxious Bench