Advent, and the End Times

The season of Advent begins this year next Sunday, November 27. This is one of my favorite times in the church year, and for many reasons, I relish the “O Antiphons,” which belong precisely to this season. They are so rich in the lessons they teach, with implications for Christmas, of course, but also for the relationship between the Old and New Testaments, and (surprisingly perhaps) for the apocalypse and the Last Judgment. You could actually present a fairly complete course in Christian theology just from these short verses.

Even better, they are deeply rooted in Christian antiquity, going back at least to the eighth century, and conceivably much earlier. I quote Wikipedia:

According to Fr. William P. Saunders, “The exact origin of the O Antiphons is not known. Boethius (480–524) made a slight reference to them, thereby suggesting their presence at that time [the sixth century]. At the [Benedictine] [Fleury Abbey], these antiphons were recited by the abbot and other abbey leaders in descending rank, and then a gift was given to each member of the community. By the eighth century, they are in use in the liturgical celebrations in Rome. The usage of the O Antiphons was so prevalent in monasteries that the phrases, “Keep your O” and “The Great O Antiphons” were common parlance. One may thereby conclude that in some fashion the O Antiphons have been part of our liturgical tradition since the very early Church.” 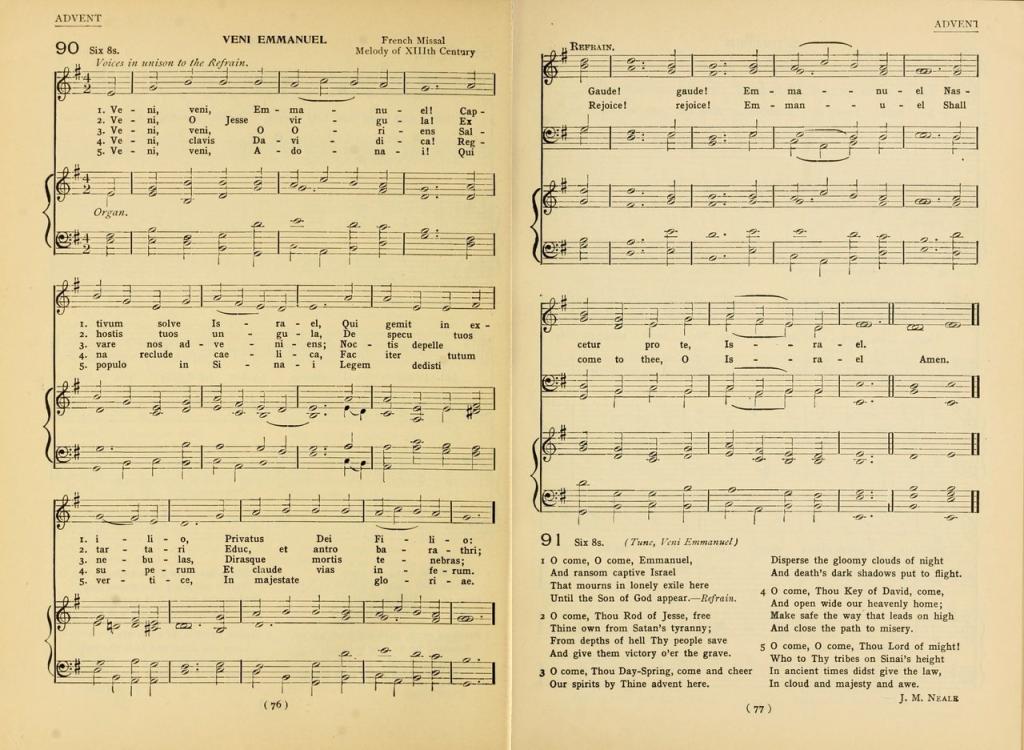 If you don’t think you know the antiphons –well, you’re probably wrong. You know them in English if you have ever heard a very popular hymn translated by J. M. Neale, which begins,

Shall come to you, O Israel!

This hymn, briefly, is a translation of seven ancient Latin antiphons that the church sang in the week before Christmas, one per evening. You can find the full lyrics easily enough.

Each antiphon gives one of the divine titles associated with messianic prophecy, with a prayer, each rooted in scripture. We begin for instance with Sapientia, Wisdom:

O Wisdom, coming forth from the mouth of the Most High,

reaching from one end to the other mightily,

and sweetly ordering all things:

Come and teach us the way of prudence.

Then we move to Adonai, the God who manifested on Sinai; then the Root of Jesse; the Key of David; Oriens, the Morning Star; King of the Nations; and finally, on Christmas Eve, to the title Emmanuel itself. And roughly, Neale’s hymn translates the antiphons in that sequence. You thus work through the whole development of the Old Testament, so that you are then ready to welcome the Christian message on Christmas morning. As has been noted, the titles have a special resonance in Latin. “In the traditional arrangement, when viewed from Christmas Eve backward, the first letters of the Latin texts (Emmanuel, Rex, Oriens, Clavis, Radix, Adonai, Sapientia) spell out the phrase ero cras (“I come tomorrow”).”

That “coming” reminds us that Christmas is only a foretaste, a first draft, of the Second and final coming, a point that assuredly will not appear as much as it might in the year’s Christmas sermons. Advent after all, adventus, is the Latin form of the Greek parousia. To understand the implications of that weighty word in the New Testament, see its main occurrences in two heavily End Times-related sequences, namely Matthew 24, and both 1 and 2 Thessalonians. Typically, “For as the lightning cometh out of the east, and shineth even unto the west; so shall also the coming of the Son of man be.” Now that would be a Christmas sermon.

Who knew this was such an apocalyptic season?

Apart from anything else, “Oh, come, oh, come, Emmanuel” is a gorgeous hymn.

November 23, 2022
Ron Sider and the Fate of the Evangelical Left
Next Post